Tomorrow, the central bank of Brazil meets to discuss interest rate policy, which   the bank has been aggressively lowering over the last year, moving rates from 11% to their current 7.25% level.  Brazil is facing the exact same situation as the other BRiC countries: as China changes its respective growth model from one that is based on exports to one driven by internal demand, those countries that supplied the raw materials to China's export engine are also slowing.  Hence, the need to change their growth engine as well.

Let's take a look at the overall economic situation in Brazil, with information provided by the bank's monthly chart book and meeting minutes from their latest interest rate policy meeting. 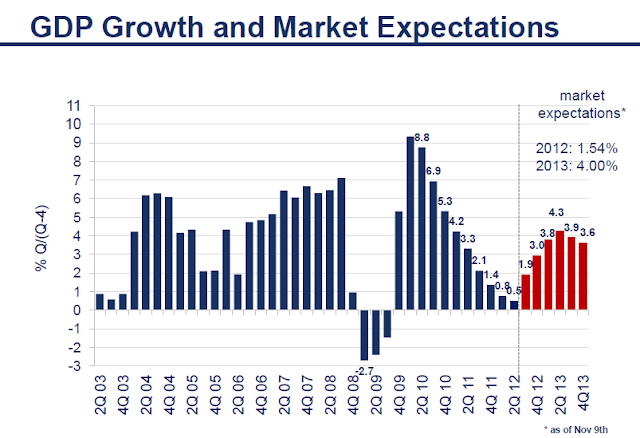 The Brazilian Institute of Geography and Statistics (IBGE) released information on Gross Domestic Product (GDP) for the second quarter of 2012. The expansion of activity was 0.5% year-over-year and 0.4% over the first quarter of 2012, according to seasonally adjusted data. Thus, the cumulative growth rate in four quarters fell from 1.9% to 1.2%, confirming the view that the economy has grown below its potential. From the aggregate supply side, the service sector and agriculture grew 0.7% and 4.9%, respectively, compared to the previous quarter, and industrial production fell by 2.5%, according to the same comparison basis. From the aggregate demand side, household expanded by 0.6% and government consumption increased by 1.1%, while Gross Fixed Capital formation (GFCF) contracted by 0.7%, quarter-over-quarter. On its turn, the contribution of the external sector was negative, with a decrease of 3.9% in exports and expansion of 1.9% in imports. In particular, foreign sales to Argentina and to the European Union were negatively impacted. In short, domestic demand, driven by moderate expansion of credit and by employment and income growth, has been the main factor sustaining activity.

The above chart and discussion represents the primary problem faced by the Central Bank: declining growth.  This slowdown was caused in large part by the Chinese slowdown, but has also been impacted by the EU's recession. 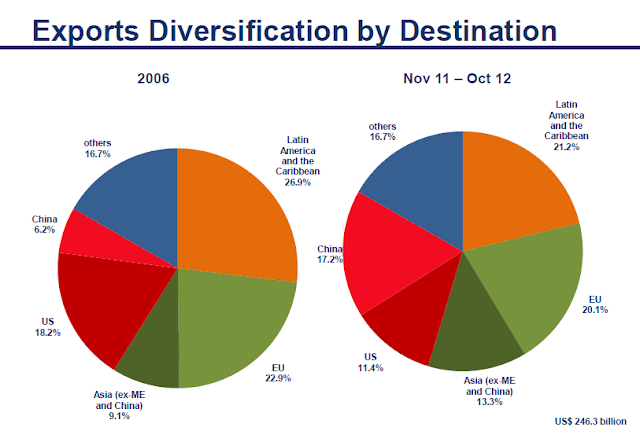 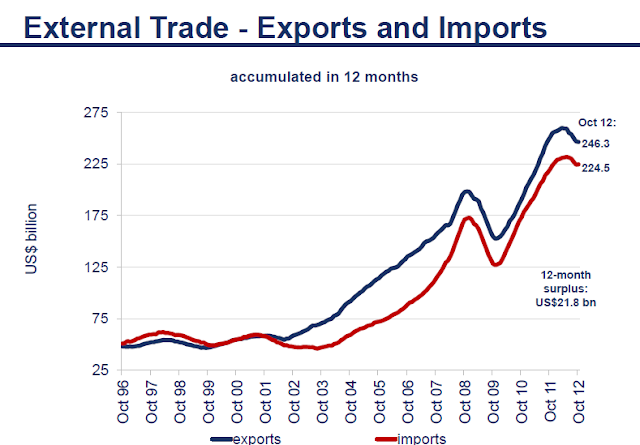 Exports and imports have been dropping for about the last 9-12 months according to the chart above. 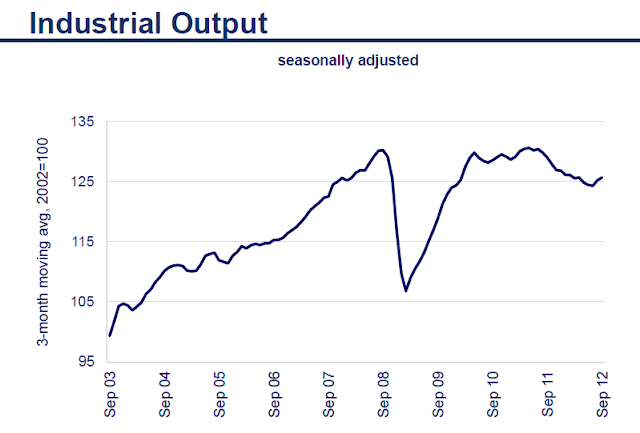 The installed capacity utilization rate (Nuci) in the manufacturing industry, calculated by the FGV, without seasonal adjustment, rose in September (84.9%), standing 0.5 p.p. above the level observed in September 2011. According to the seasonally adjusted series calculated by the FGV, the Nuci stood at 84.1% in
September – the highest value since July 2011 - 0.5 p.p. above the level recorded in September 2011 and 2.6 p.p. below the record high of the series recorded in June 2008. Capacity utilization intensified in the consumer goods sector, which reached 86.7%, and retreated in the capital goods sector, which recorded 82.0%. In the sectors of intermediate goods and construction inputs, the levels stood at 85.1% and 88.0%, respectively. Still according to the FGV, the Industry Confidence Index continues a gradual recovery trajectory, reaching the
highest level since July 2011 according to the seasonally adjusted series, mainly due to improvements in the expectations component. The share of companies that reported inventories at normal levels increased since the last Copom meeting.

The above data tells us that industrial production is down year over year, but has turned around over the last few months.  Capacity utilization has been inching higher.  In addition, the confidence level is now on a "recovery trajectory" indicating it was reading contraction or slowdown for some time.

The above numbers -- exports and industrial production -- highlight the rate cutting argument.  However, there is also plenty of ammunition for the hawk's argument, starting with inflation: 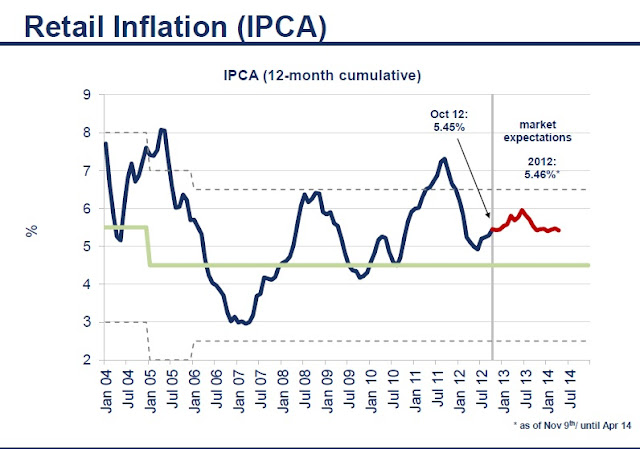 While the inflation rate has dropped over the 2011-2012 period, it is starting to increase and currently stands at 5.45%.  Other measures of inflation were higher:

3. Broadest inflation, measured by the General Price Index (IGP-DI), decreased from 1.29% in August to 0.88% in September, resulting, on a twelve-month trailing basis, in 8.17% inflation (7.45% in September 2011). The main component of this indicator, the Wholesale Price Index (IPA), changed 9.18% in the twelve months through September, influenced by strong increase in the agricultural sector (18.06%), impacted by supply shocks. According to the breakdown by stage of production, there were increases in the prices of raw
materials (11.84%), intermediate goods (9.76%) and final goods (6.13%), according to the same comparison basis. Inflation measured by the Consumer Price Index (IPC), the second most important component of the IGP-DI, stood at 5.73% in the twelve months through September (7.13% in September 2011). The Civil Construction National Index (INCC), component with the lowest weight in the IGP-DI, changed 7.49%, according to the same comparison basis, driven by the increase in labor cost. On its turn, the Producer/Manufacturing Industry Price Index (IPP/IT), calculated by the Brazilian Institute of Geography and
Statistics (IBGE), increased 0.53% in August (0.50% in July), and 7.53% in twelve months. The Copom considers that the effects of the behavior of wholesale prices on consumer inflation will depend on the current and prospective demand conditions and on the price setters' expectations regarding the future inflation path. 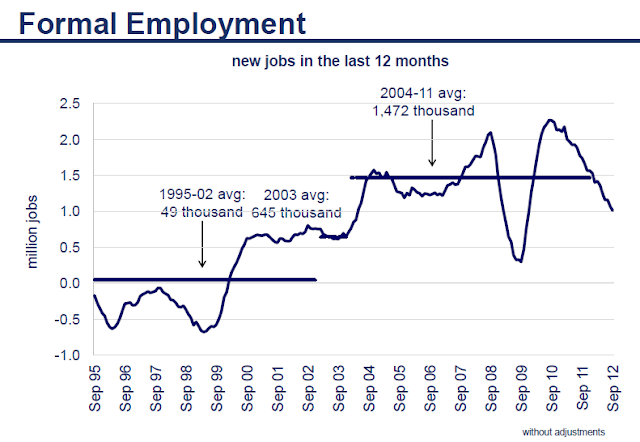 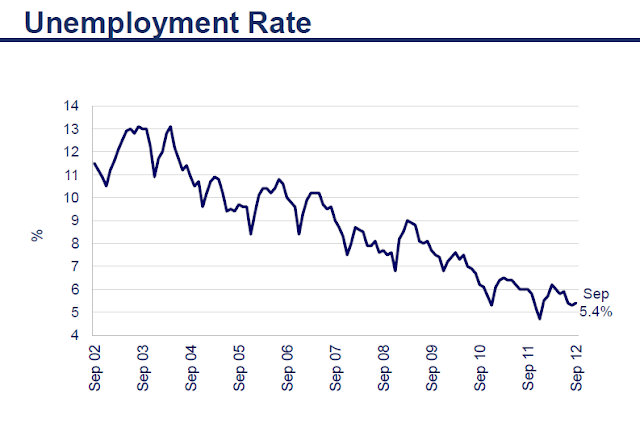 And while overall job creation is lower (top chart) the unemployment rate is low.  In the US, full employment is considered to be 5% --, so using that bench mark, Brazil is already near that level.  This has led to strong wage growth, which leads to strong demand at the retain level: 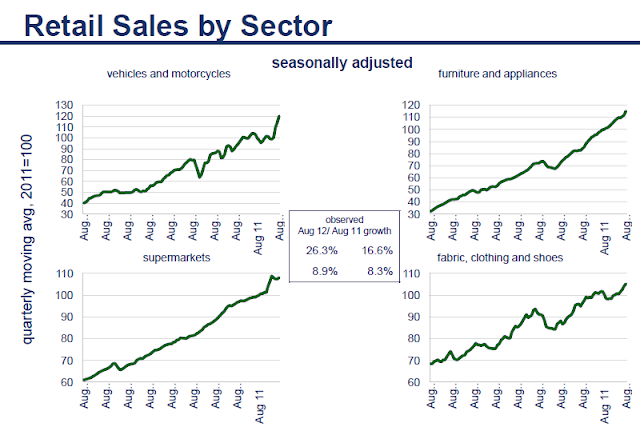 Here's how the central bank described it:

The unemployment rate for the six metropolitan areas covered by the Monthly Employment Survey (PME), without seasonal adjustment, retreated to 5.3% in August, 0.7 percentage points  (p.p.). below the rate recorded in August 2011. According to BCB seasonally adjusted data, the unemployment rate changed from 5.3% in July to 5.2% in August, a record low since the beginning of the series in March 2002. Compared to August 2011, there were expansions of 1.5% of the working population and 0.7% of the Active Economic Population (PEA). The lower growth rate of the PEA in the recent past has contributed to stability, at low levels, of the unemployment rates, despite the moderation in the pace of job creation. Also according to the PME, the average real income rose 2.3% in August, year-over-year. As a result, real payroll, considering the average income of the employed population in the six metropolitan areas, increased 3.8%, compared to August 2011. Data released by the Ministry of Labor and Employment (MTE) show that, in August, 100.9 thousand formal jobs were created (190.4 thousand in August 2011). The sectors that contributed the most to this increase in the number of formal jobs in the month, in absolute terms, were the services and trade sectors.  In short, the set of available data indicates that, although the labor market remains robust, there are signs of moderation at the margin.

10. According to the retail monthly survey (PMC) from IBGE, broad retail sales increased 10.2% in July, year over- year, supported, in part, by fiscal stimuli. According to the seasonally adjusted series, broad retail sales decreased 1.5% in July, month-on-month, after expansion of 6.2% in June. Therefore, the accumulated growth rate in twelve months stood at 5.9% in July, with expansion in all ten sectors surveyed, with highlights for office, computer and communication material and equipment (19.9%) and furniture and appliances (14.2%). Since October 2011, the FGV, in partnership with the BCB, has released the Trade Confidence Index (ICOM).  This indicator provides the current outlook and signals the evolution of commercial activity in a more timely manner. In September, the index expanded for the second consecutive month. For the upcoming months, the retail sales trajectory will continue to be influenced by governmental transfers, by the pace of real payroll growth, by the reduction in borrowing costs and by moderate credit expansion.

But in less formal terms, the economy is already running hot.  Job creation is strong enough to lead to wage gains, which has led to strong retail sales.   This is a classic case of demand pull inflation.

The Brazilian central bank is faced with a difficult policy dilemma: slowing growth is occurring while the economy is at full employment with fairly strong inflationary pressures.  In addition, the slowing growth has occurred during a period when the bank has been cutting rates, indicating that lower rates aren't having the desired stimulative effect.