Why Is the Fed Acting Now? And Why the MBS Market?

To support a stronger economic recovery and to help ensure that inflation, over time, is at the rate most consistent with its dual mandate, the Committee agreed today to increase policy accommodation by purchasing additional agency mortgage-backed securities at a pace of $40 billion per month. The Committee also will continue through the end of the year its program to extend the average maturity of its holdings of securities as announced in June, and it is maintaining its existing policy of reinvesting principal payments from its holdings of agency debt and agency mortgage-backed securities in agency mortgage-backed securities. These actions, which together will increase the Committee’s holdings of longer-term securities by about $85 billion each month through the end of the year, should put downward pressure on longer-term interest rates, support mortgage markets, and help to make broader financial conditions more accommodative.

So, why is the Fed acting Now?


First, remember that many people are of the opinion the Fed should have been acting a long time ago.  Krugman and Thoma are both examples of people who have been calling for Fed action pretty consistently for at least a year, if not longer.  I think you can also put DeLong in that camp.

Personally, I'm less inclined to think action is a good thing.  Not because it's bad, but because I think we're seeing diminishing returns from the Fed's actions.  While the first QE was helpful, we're seeing less bang for the buck from operation twist.  And while expanding into the MBS market should help to suppress rates across a wider spectrum of markets, the low rates from the Treasury market are already helping in the mortgage area (treasuries and MBS are linked in the market to a certain extent).  Consider this chart:

I also don't think the expectations game is that important -- that is, for the Fed to say, "we'll keep rates low until this date."  And, frankly, I don't think that GDP targeting would really make that big an impact on the market or the economy.  I think most market participants currently accept the fact that the Fed will be very loose with policy for a long time and that's enough.

The real problem we're facing is fiscal and not monetary.  There is a large output gap in the economy that can really only be closed by fiscal spending which we're clearly not going to do.  And Washington is run by a bunch of idiots -- we have the Republicans who live in a completely alternate universe and the Democrats who have no spine.  As a result, the Fed's hand has been more or less forced by the market and the government's overall inaction.

I do think the Fed is acting now because they see a pronounced slowdown in employment over the last few months which runs against half of their duel mandate.  Consider this graph: 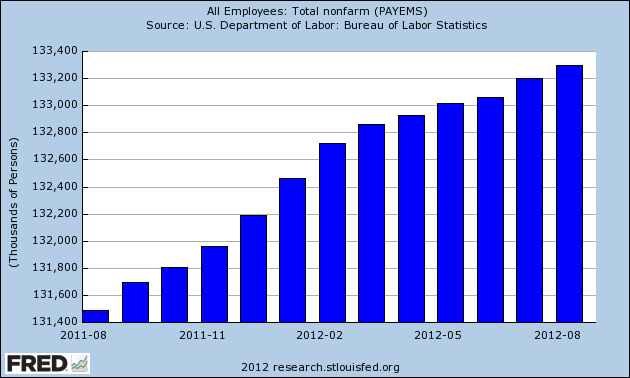 Notice how the arc is slowing.  In the last 5 months, we've seen less than 600,000 jobs created which is terrible and indicates there is something wrong in the economy.  And in the latest BLS report, previous months figures were revised lower.  I also think that Fed is aware that the power of their ammunition is decreasing with each move, so they are trying to time their actions to have the most impact possible.

That being said, I think Ben's choice of action is very interesting.  As both NDD and I have noted, the housing market has bottomed and is moving higher.  Granted, this is from a low base.  But, we are seeing a turnaround.  In addition, housing has been a primary driver of a majority of post-WWII recoveries.  By buying MBS, the Fed is trying to maximize it's impact.  Despite my reservations, it will work.
Posted by Unknown at 10:00:00 AM