Just when you think someone can't prove that their politics have completely blinded them to reality ...

From his latest blog posting:

Here is an update of the chart that compares the change in the employment to population ratio in this recovery with the recovery from the deep slump of the early 1980s. This percentage dropped a little in August, but the big story is that there has never been a lift off. 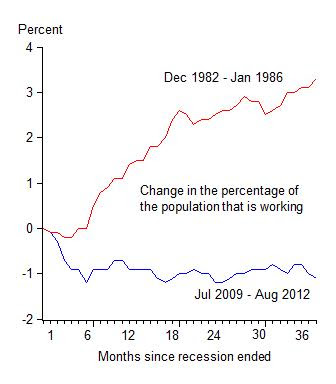 First, notice that again he's comparing the latest expansion to 1980, despite the fact this is an apples to oranges comparison.  The 1980s recovery was from a Fed induced slowdown to cool inflation (which worked, by the way), while the current recovery is a debt-deflation recovery, which, by definition is far slower.  The reason he's doing this is obvious -- his primary readership worships at the alter of St. Reagan.

Second, let's look at the employment to population ratio over the long-term. 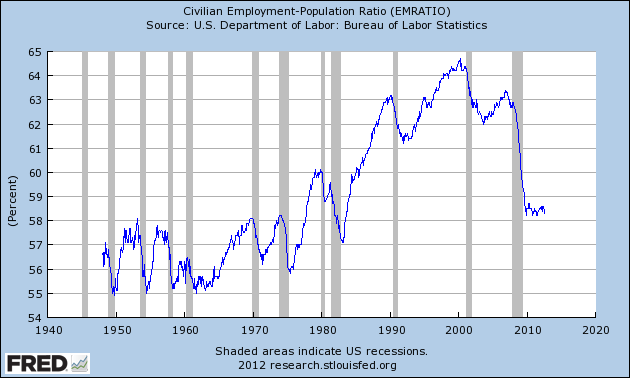 Notice that starting in the 1980s the trend continually increases until just after 2000 when it starts to decline.  In other words, something started in the early 1980s that was larger than simply the beginning of an expansion.  Why was that happening? 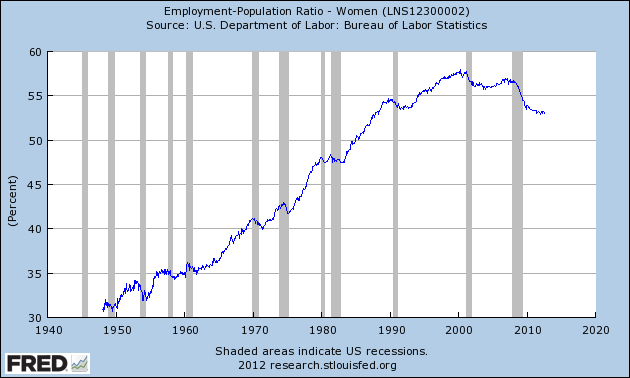 Notice that the percentage of women working has been increasing for most of the length of series, falling only over the last 10-12 years.  You may remember a movement called the "women's liberation movement" which opened the door to women in the workplace?  That's a big reason for the increase.

Secondly, starting in the 1980s we get the baby boomers hitting their professional stride.  Starting around 1980, the baby boomers were about 40 years old, and as they hit their prime working years, they entered the labor force, hence a second reason for the increase in the employment to population ratio.

1.) As the baby boomers have moved through the labor force, they are now just starting to retire.  This was the conclusion of a report issued by the Chicago Federal Reserve earlier this year.

2.) Younger people are staying in school longer and not working -- hence the reason for the decline among teenagers.  Consider this chart of unemployment for the 16-19 age group: 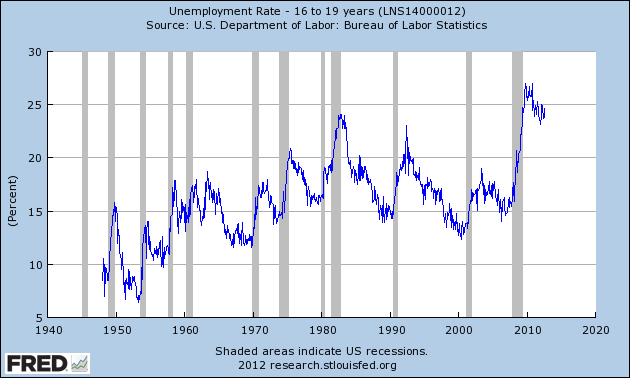 Yes -- it's high.  But these people are supposed to be students. 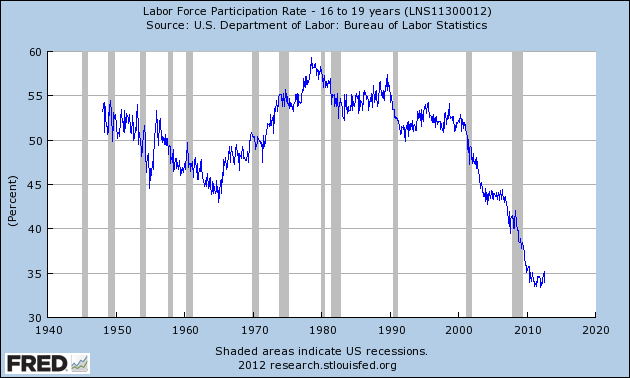 The LPR for the 16-19 year old age group has been declining for the last decade.  This is not something we should be wringing out hands about; people in this age group are not the primary breadwinners in their respective families for the most part.

Once again, Taylor has sacrificed his professional reputation in order to make a political argument -- and one which is not backed by the facts (yet again).  I realize this doesn't mean anything to most of his readers, but at some point someone in his department should ask him what in the hell he's writing about.