Professor John Taylor has been writing about the weakness of the latest recovery (which, admittedly, we all have).  However, he continually compares the current recovery to the Reagan recovery.  I would argue that he is wrong in this comparison for the reasons listed below.

First, see his latest post on the subject here, where he compares the potential and actual GDP growth of the 1980s and the 2000s, along with the growth rate of real GDP.  He makes the same comparisons here.

There are several problems with this comparison, the first of which is the cause of each respective recession.  The recession of the early 1980s was caused by the central bank raising rates to lower inflation, as evidenced by the following chart: 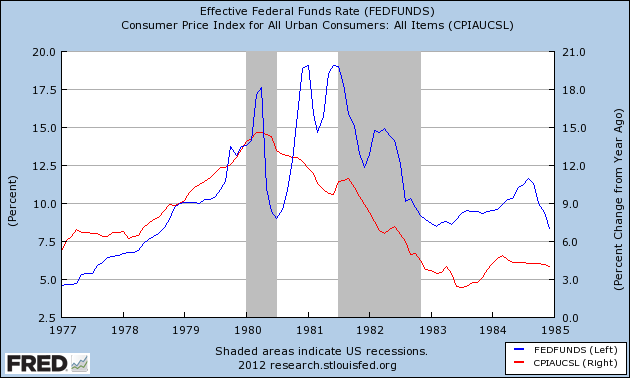 The above chart compares the effective federal funds rate (left scale) with the year over year rate of inflation (right scale)  Note especially the spike in the federal funds rate starting in 1981, when Volcker kept the interest rate incredibly high to lower inflation.  This had two effects.  First, it was a primary cause of the second recession which started in mid-1981.  Secondly, it clobbered inflation by the mid-1980s.

Compare that to the start of this recession, which was started by a near collapse of the financial system.  Taylor admits that causal relationship in this post, although he argues that government intervention made the situation worse (which I disagree with).  A great explanation of the events leading up to first round of the crisis is presented in the following video:

Simply put, the causation of each respective recession is entirely different.  The recovery from the Volcker style recession is far easier to deal with: the fed lowers interest rates, which increases demand and thereby increases economic activity.  This relationship is part and parcel of economic knowledge (for a simple explanation, read Martin Zweig's Winning on Wall Street).

The recovery from a financial system shock is far more complicated.  First, while the Fed may lower interest rates to simulate the economy (which happened), the transmission system for that policy action was greatly hampered.  Consider the following charts from the FDIC's quarterly banking profile:

In 2008, the banking system was awash in bad loans. The top chart shows quarterly net charge offs for the banking sector, along with the change in non-current loans.  These figures continued to increase until the end of 2009, and were still high in 2010.  The loss provisions/net charge offs chart show the same thing -- that financial intermediaries were in serious trouble for the first 2-3 years of this recovery, meaning they could not transmit monetary policy (by making more loans) into the economy in nearly as effective a manner. 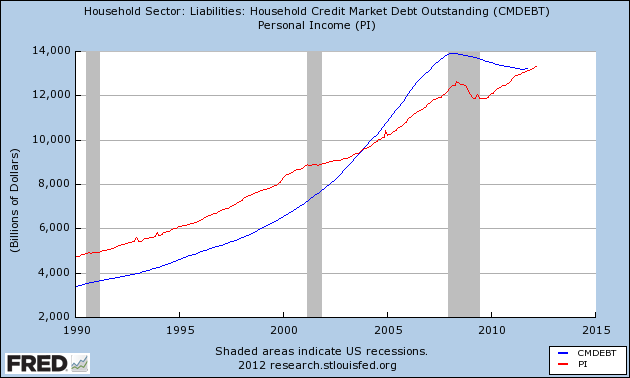 In the early 2000s, total household debt became larger than personal income, meaning there was more household debt in the economy than income.  Put another way, the household debt/personal income ratio increased to over 100%.  This means that households were incredibly indebted, and thereby unable to take out additional loans.  Also note that since the start of the great recession total household debt has been decreasing, telling us that households are not talking out more loans, but instead paying that debt off.  Or, put another way, not only are banks unable to make loans because of a hampered financial condition, but consumers are paying down debt instead of increasing their debt.  This further hampers the transmission of Fed policy because loan demand and supply is simply weaker.

The current recovery is best explained by this paper from Irving Fisher, titled The Debt Deflation Theory of Great Depressions (PDF).  As such, The  most appropriate time comparison is the the Great Depression, especially considering the severity of the financial shock that caused the recession.


For the above stated reasons, Professor Taylor's comparison to the 1980s economy is wrong.