Japan, Deflation and Some Very Bad Charts And Numbers 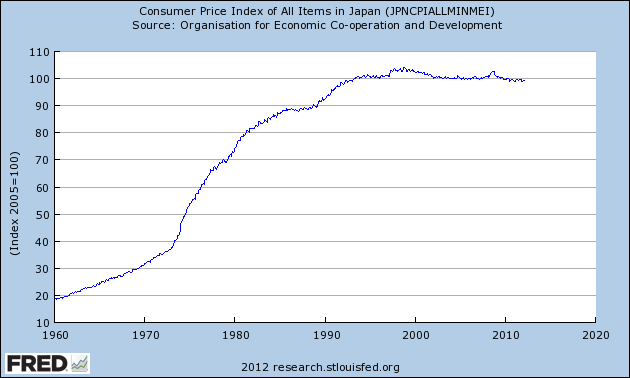 This chart is by far the most important piece of information about Japan: inflation - or, more specifically, the lack thereof.  While no one wants hyper-inflation, some inflation is actually a good thing, as it indicates that demand is increasing a bit faster than supply, or that supply is somewhat constrained and therefore needs to increase prices because it can't adequately supply the market. 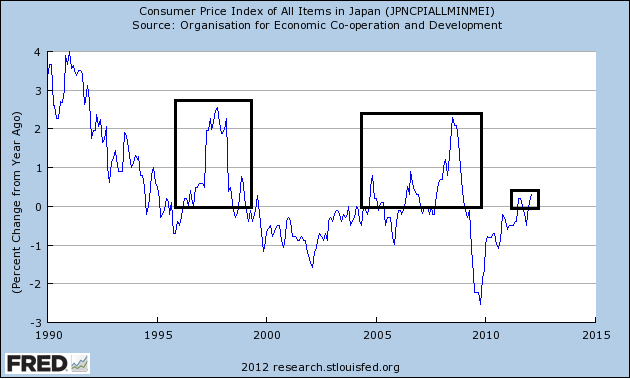 The above chart shows the YOY percentage change in Japanese CPI for the last 20 years.  Note the following:

For the rest of the time, Japan was in a period of deflation.  Let's explain why this is bad, with hep from the economic dictionary at the Economist:


Deflation is a persistent fall in the general price level of goods and SERVICES. It is not to be confused with a decline in prices in one economic sector or with a fall in the INFLATION rate (which is known as DISINFLATION).

Sometimes deflation can be harmless, perhaps even a good thing, if lower prices lift real INCOME and hence spending power. In the last 30 years of the 19th century, for example, consumer prices fell by almost half in the United States, as the expansion of railways and advances in industrial technology brought cheaper ways to make everything. Yet annual real GDP GROWTH over the period averaged more than 4%.

Deflation is dangerous, however, more so even than inflation, when it reflects a sharp slump in DEMAND, excess CAPACITY and a shrinking MONEY SUPPLY, as in the Great DEPRESSION of the early 1930s. In the four years to 1933, American consumer prices fell by 25% and real GDP by 30%. Runaway deflation of this sort can be much more damaging than runaway inflation, because it creates a vicious spiral that is hard to escape. The expectation that prices will be lower tomorrow may encourage consumers to delay purchases, depressing demand and forcing FIRMS to cut prices by even more. Falling prices also inflate the real burden of DEBT (that is, increase real INTEREST rates) causing BANKRUPTCY and BANK failure. This makes deflation particularly dangerous for economies that have large amounts of corporate debt. Most serious of all, deflation can make MONETARY POLICY ineffective: nominal interest rates cannot be negative, so real rates can get stuck too high.

The above definition gives us same very good information.  The top concept -- that some deflation can be good -- is something we don't talk too much about, but it's an incredibly important and valid point.  When technology advances in a manner that lowers prices, yet at the same time incomes are advancing in some degree, we get a very beneficial economic environment.  For example, in the1990s, the world economy experienced a huge explosion in technology and the like.  This had the overall effect of increasing productivity, thereby lowering costs.  At the some time, we also had the last big income advance of the baby boomers (as people get older, their income typically increases), increasing incomes.  The combination was great.  (As an aside, this also explains part of the US' CPI calculation which tries to adjust for advances in technology.)

Conversely, deflation can also mean slack demand or excess capacity.  If that is the case, it tells us that the economy is in trouble.  People aren't spending as much, so the demand curve moves to the lest, lowering prices.  As people spend less, businesses start to lower their capacity, which in turn lowers employment, which lowers demand, etc... At this point, you get the idea: it's a very bad development.

Overall, here is the end result: 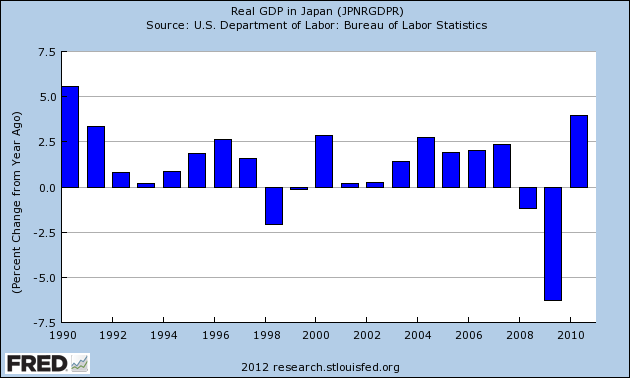 20 years of very sub-par economic growth.  And that, is a terrible thing.