Italy keeps coming up as a potential EU problem child.  Unfortunately, the financial press really hasn't given us any information on the topic.  However, the IMF has.  So, let's dig into the IMFs assessment of Italy, with some help from OECD and IMF statistics services.


1. The global economic crisis has hit a structurally weak Italian economy. Italy’s growth rate had already been slowing for over a decade, reflecting weakening productivity. Economic rigidities, along with Italy’s specialization in products with relatively low value added, have also been contributing to a steady erosion of competitiveness. Consequently, Italy has been losing its market share of world trade.

Form the US Department of State:


Italy has few natural resources. With much land unsuited for farming, Italy is a net food importer. There are no substantial deposits of iron, coal, or oil. Proven natural gas reserves, mainly in the Po Valley and offshore in the Adriatic, constitute the country's most important mineral resource. Most raw materials needed for manufacturing and more than 80% of the country's energy sources are imported. Italy's economic strength is in the processing and the manufacturing of goods, primarily in small and medium-sized family-owned firms. Its major industries are precision machinery, motor vehicles, chemicals, pharmaceuticals, electric goods, tourism, fashion, and clothing.

These two data points illustrate the central problem faced by Italy: they don't have something that everybody wants.  Compare these facts to, for example, Chile, which has copper or Saudi Arabia, which has oil.   Both of these countries can export a raw material.  In comparison, Italy doesn't have this advantage.  And, they aren't developing any goods/services that distinguish themselves from their competitors.

The above chart shows that aside from 4% growth at the beginning of the decade and slight move into the 3% range in 2007, Italy has been showing a very slow rate of growth for slightly over a decade.  This tells us that there is some type of  fundamental problem with the economy.

Let's look at some other stats: 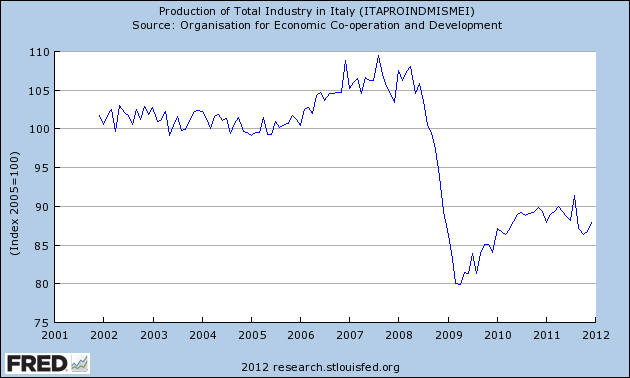 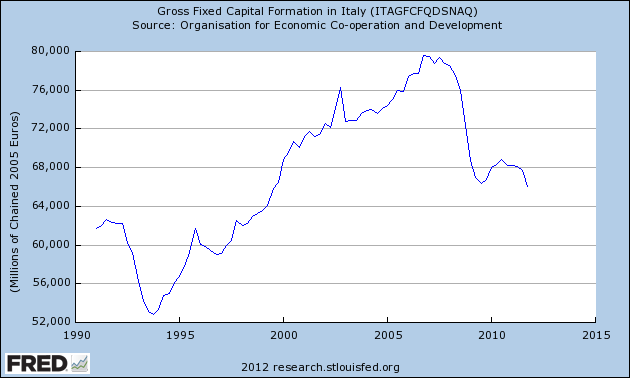 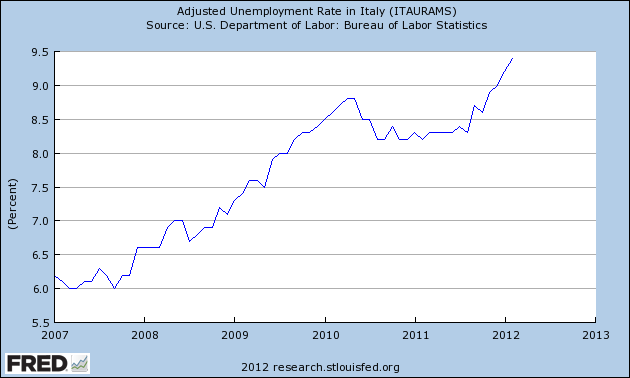 Italian unemployment has been increasing since roughly the middle of 2011. 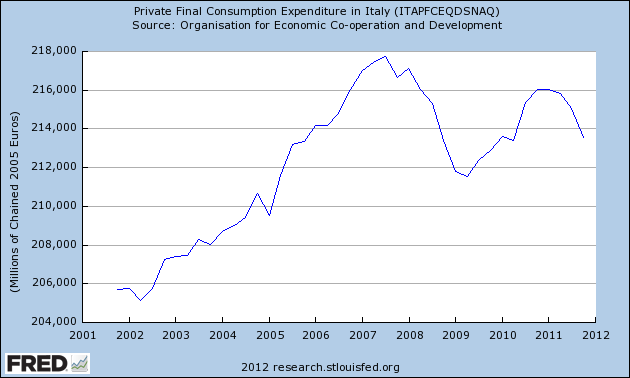 Real private PCEs are also in a negative spot.  After the recession, PCEs dropped, as would be expected.  However, starting at the beginning of 2009, we see PCEs start to increase.  However, in roughly mid-2011, PCEs drop. 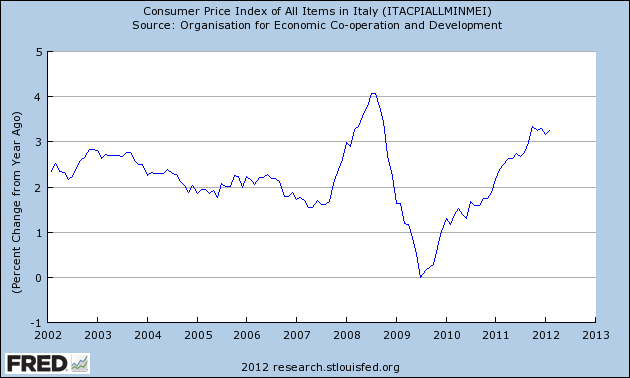 CPI has been rising on a YOY basis since mid-2009.

Finally, the balance of trade is getting worse.

To sum up the above information we get the following picture: Italy has experienced weak growth for the last 10 years.  They have not developed or created exports wanted by other trading partners, meaning the contraction of 2007-2009 was a very negative event for the economy.  The trade deficit has been increasing for the last ten years.  Italian consumers are not spending, lowering growth.  Overall investment is very weak.

And consider it in conjunction with this table of total Italian GDP:

Basically, Italy didn't do anything or not do anything.  Their growth dropped which lowered total GDP which led to an increase in the debt/GDP ratio.

Unfortunately, there aren't any bright spots in the Italian economy. From the IMF:


2. The global crisis affected the economy mainly through the trade, credit, and confidence channels. The recession in Italy’s main trading partners led to a sharp fall in exports. Although there was no fallout from the banking system, financing conditions tightened and credit growth fell. Despite strong household balance sheets, private consumption declined significantly, mainly reflecting higher uncertainty. Fixed investment and inventories also fell sharply, owing to weak demand prospects. The decision not to engage in a large fiscal stimulus (which was appropriate in view of the high level of public debt) meant that these effects on aggregate demand translated into one of the deepest output falls among large industrialized countries. However, unemployment rose only modestly, in large part thanks to the extension of the existing wage supplementation scheme (Cassa Integrazione Guadagni), and lower participation.

3. A modest and fragile recovery based on external demand, restocking of inventories, and some government support is now under way. As elsewhere in the industrial world, potential output in Italy may have been adversely affected by the crisis.

The slow recovery of Italy’s major trading partners and the significant competitiveness gap will limit export growth; the rise in non-performing loans and the need to shore up banks’ capital will constrain credit supply; rising unemployment will undermine private consumption; and investment will be limited due to financing constraints, low capacity utilization, and falling profitability.

4. Although the worst effects of the crisis have mostly passed, key vulnerabilities remain. The high private savings rate, low private indebtedness, and the resilience of the financial sector, are important elements of strength. However, the high level of public debt and the disappointing growth performance could make Italy vulnerable to external shocks. Debt management has been conducted prudently, by lengthening the maturity of public debt and building buffers. These efforts should help strengthen the government’s financial position. But they cannot be a substitute for a sustained fiscal consolidation.