The verdict: big problems but no contraction (yet)

Over the last few weeks I have written a number of articles re-examining and updating my forecast from the beginning of this year, of slow growth in the first half (possibly even one negative quarter) but no recession, followed by stronger growth in the second half.

That examination revealed that there are very real and serious problems with consumer wages, income, and savings. Similarly there are problems with corporate profit growth. On the other hand, there are a slew of data series which almost always turn negative months before a recession begins -- and so far they are all positive.

The backdrop, from a year ago, is that housing, bonds, and Real M2 all turned negative towards the end of 2010 and bottomed in the first 1/3 of 2011. They have since all risen. 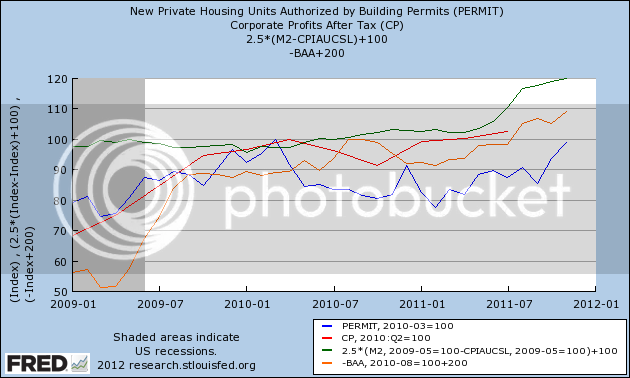 Since they are long leading indicators, however, the maximum negative correlation with the economy is right about now: 12-16 months later. Similarly, Prof. Hamilton has described that increases in gasoline prices feed through to maximum impact on the economy about 12 months later -- meaning we are right at the crescendo of impact from last year's increase. Coincident with those troughs, of the four coincident series signaling recessions, real income has turned slightly negative in the last few months, and industrial production has softened (although much of that can be blamed on utilities not needing to produce so much power during our non-winter winter). Real retail sales are still going strong, however, and even with March's surprise, so are payrolls.

On the positive side of the ledger is that in the past, ALL of the following data series, with rare exceptions, would have turned negative in the months previous to a recession. None have. Here's the list:

Similarly, as to consumer spending, retail sales weaken seriously in comparison to personal consumption expenditures in the months before a recession. To the contrary, this ratio is at one of the highest rates in several decades. Additionally, consumer refinancing is enabling them to continue spending in the face of higher prices.

On the housing front, the Federal Reserve Bank's H8 report of real estate loans has turned up strongly in the last few months on a YoY growth basis, and indeed just turned absolutely positive last week.

Finally, after a bout of serious weakness, ECRI's own WLI growth index has turned positive. This is what happens when recessions end, not when they begin, as shown in this graph (h/t Doug Short):

ECRI's own founder, Prof. Geoffrey Moore, said that the first signal of a recovery after a recession is when the growth rate hits +1.0. It has just done so. In fact, as shown in the graph above, not once in the last 50 years has a positive and improving reading been consistent with a recession.

On the negative side of the ledger, I've also pointed out a number of series are extremely weak and are consistent with actual contraction. Those include:

core durable goods - look like they are rolling over
ISM vendor deliveries - also have rolled over
real wages - have been negative for over a year
gas prices - need I say more
personal savings - consumers are closer to the point of exhaustion of accumulated savings since the recession
corporate profits after tax - 4th quarter 2011 profits were slightly less after taxes than Q3. These are a long leading indicator and portend weakness in the near future rather than the present.

I also discussed inflation-- should YoY commodity prices decline significantly below YoY consumer prices, that would be a strong sign of coincident weakness. We are just at the point where the two are crossing.

Further, as of last Friday, three leading employment indicators, after having been positive for several years, went negative in the March report:
temp hiring - turns negative well in advance of recessions. It fell, for the first time since the recovery begain in March.
average hours worked, mfg - at highs not seen since the tech boom, but fell last month.
employment vs. initial claims - the scatterplot analysis shows that hiring stops before significantly increased layoffs start, meaning that at the same level of initial jobless claims, monthly payrolls weaken dramatically. The March jobs report released on Friday was the first time such a scenario looked possible.
A couple of months will be needed to tell if these were weather-related anomalies or not.

A few additional notes:
Several long leading indicators bear special notice
real personal savings rate* - this is long leading indicator. It has not turned negative, but is almost at zero now. This portends weakness, but moreso in 2013 than at present.
Real M2 - this was under the point where it is consistent with recession up until 12 months ago. It still indicates weakness for another 3 to 6 months.

We continue to have the same old problems -- the housing market is turning, but with excruciating slowness, and the Oil choke collar kicks in every time it looks like the economy will attain escape velocity. Several longer term leading indicators -- corporate profit margins and the real personal savings rate -- suggest increasing weakness as we move into 2013.

At the same time, I see no way that the economy contracted in the first quarter, although growth may have been weaker than expected. Depending on whether the leading employment series remain negative, or if March was a weather-induced aberration, the immediate future may have continued growth or we might stall in this quarter (much as in the early part of last year).

Between the continued slow turn in the housing market, and continuing consumer refinancing, if gasoline again declines in the latter part of the year, I suspect that growth will once again pick up. All things considered, I see no reason to substantially change my forecast for the year of relative weakness now followed by relative strength later in the year.
Posted by New Deal democrat at 10:00:00 AM