Consider the following from Bloomberg:


Skepticism about the U.S. recovery, as well as signs Europe’s debt turmoil isn’t over, is enhancing demand for Treasuries. This may keep yields from surging even if Fed policy makers refrain from a third round of quantitative easing, and allow the Obama administration to finance a fourth deficit exceeding $1 trillion at near-record low costs.

“Investors are holding an overwhelming amount of cash in the system and chasing fewer securities, which has supported Treasuries,” said Dominic Konstam, global head of interest- rates research in New York at Deutsche Bank AG, one of 21 primary dealers that trade with the central bank, in an April 5 telephone interview.

Treasuries lost 1.3 percent in the first quarter, according to the Bank of America Merrill Lynch Index, compared to a 13 percent return in the Standard & Poor’s 500 Index.

Since the financial crisis the growth in the money supply in the U.S. has outstripped the rate of growth of the value of assets, leading to a “liquidity overhang,” according to Deutsche’s Konstam, causing investors to purchase bonds in order to put the cash to work. 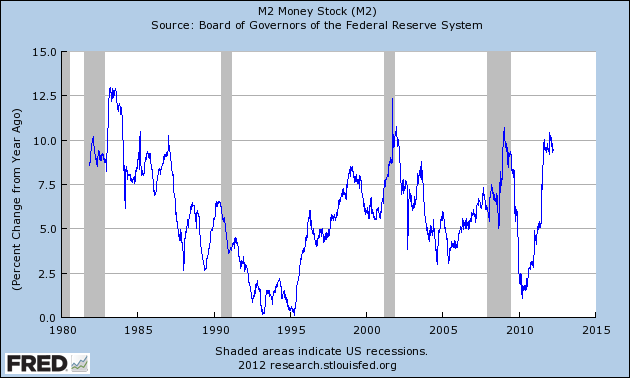 This is a chart of the YOY percentage change in M2 -- the largest monetary aggregate we have in the US.  M2 has been growing at strong levels, although the pace of growth has been slowing at the 10% level.  Finally, note we've seen the recent rate of YOY percentage change before -- in the 1980s, coming out of the 2000 recession and at the end of the last recession.  This tells us the rate of change -- while high --  is not one that will lead to financial ruin if managed properly.

As the Bloomberg article notes, this money has to go somewhere; hence the reason for the bid in the fixed income market.

Now consider this chart from the FRED system of the various corporate bond curves: 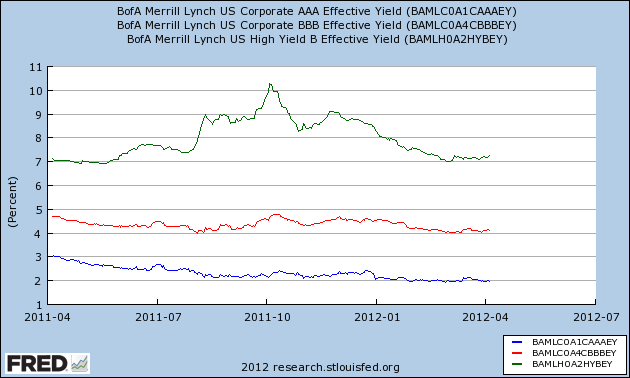 Notice  the junk bond market blew out in the 2H11 but is now back in line. We see some movement in the BBBs, but the AAA remain more or less the same. 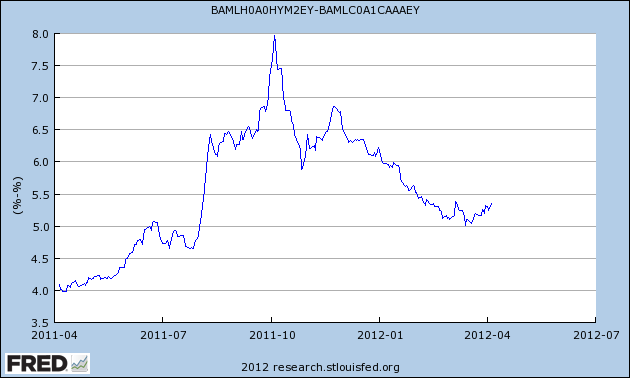 The above chart shows the junk/AAA spread.  This one went to 8% at the beginning of October of last year, but has since tightened to about 5.25%.  However, it's not back to the lows see in the 1Q11.  As the chart below shows, most of the movement came in a junk bond market sell-off rather than a AAA market sell-off. 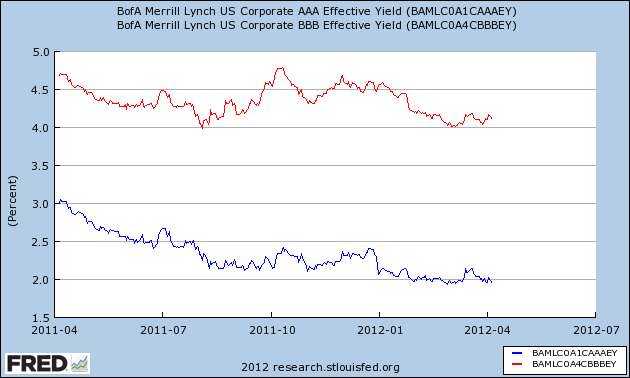 The above chart shows the AAA/BBB spread for the last year.  The BBBs sold off a bit, but it was hardly a blood bath sell-off.  Eyeballing the chart the worst part of the move was about 75 basis points.  The AAA curve barely budged beyond standard market noise. 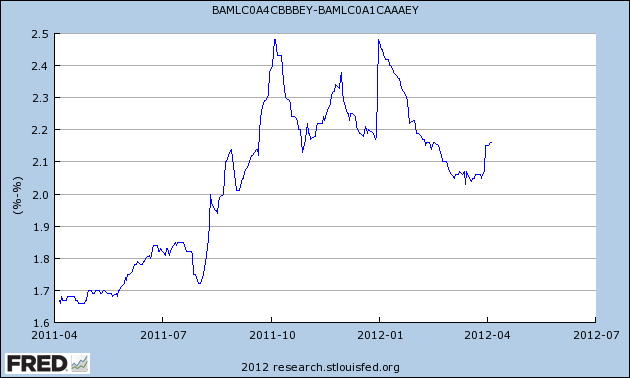 The above chart shows the difference between BBBs and AAA over a single year.  Notice the widening in 4Q11 as traders became concerned about safety, thereby selling riskier assets (BBBs), leading to the spread widening. 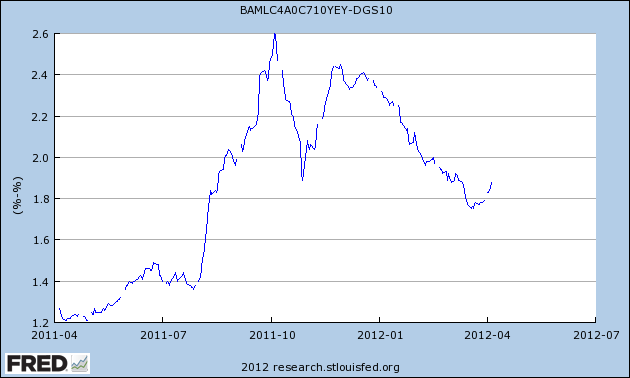 
Most UK-based fund managers consider government bonds the most overvalued asset class, according to a recent survey, indicating that the recent pressure on the sovereign bonds of several major economies could continue.

Almost four-fifths of fund managers surveyed in the quarterly Valuations Index, conducted by the CFA Society of the UK, said benchmark government bonds were overvalued relative to their fair value over the next year.

What does all of this tell us?

1.) The junk bond market took it in the teeth in the second half of last year.  This is to be expected; when traders get concerned about financial stability, risk assets are the first to go.  This explains the volatility in the market and the sell-off in the BBB market (which wasn't as severe as the junk bond market, but was still a sell-off) and the rock steady nature in the AAA market.

2.) We've seen a pretty good recovery in all markets over the last few months; junk bonds have come back in as has the BBB market.

3.) Government debt is probably overvalued at these levels.  But at the same time, with the high degree of uncertainty regarding the EU, there is a need for preservation of capital trade rather than a return on capital trade.

4.) AAA corporates had a decent bid throughout the financial fall-out from last year; they also have  pretty good bid now.
Posted by Unknown at 2:00:00 PM