A closer look at the jobs report: showrooming, weather, and a worrying deviation from trend

I've had a chance to dig deeper into Friday's punk jobs report, spurred on by Dean Baker (who says it was mainly due to the weather) and Scott Grannis (who says it isn't nearly as poor as it looks), in contrast to my initial impression that "showrooming" (i.e., using local retails stores as the showroom for online purchases) might be the primary culprit.

My conclusion: while I hope Scott Grannis is right, there has been a worrying deviation from trend. Some of that deviation is from a leading component of the trend. The remainder seems about equally split between the effects of our non-winter winter, and an increase in showrooming probably partly in response to high gasoline prices.

First, let's note Scott Grannis's point. The household report continues to suggest a much stronger private sector than the establishment report. The establishment report shows a gain of 1.450 million jobs in the private sector in the last 8 months, or about 180,000 a month. By contrast, the household report shows a gain of 3 million jobs during that period, for an average gain of 375,000 a month. Here's the graph of private job growth in the household survey (blue, left scale) vs. the establishment survey (red, right scale) for the last 5 years: 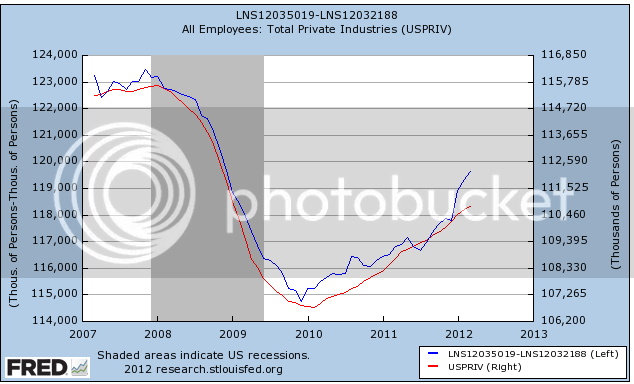 Now let's turn to the establishment report. Dean Baker chides observers for failing to take into account the weather:

In the winter months we usually get some serious snowstorms in the Northeast and Midwest. This means construction sights get shutdown and project starts are delayed. People will be less likely to go out to restaurants when the streets are covered with snow or its below zero. The same applies to shopping at the mall or buying a new car. If the weather is really bad factories will shut down because they can't get necessary supplies.

None of this happened this winter which meant that job growth was better in the winter months than would ordinarily be the case. But if we didn't get the winter weakness that we expect, then we won't see the same spring bounce that we usually get.

People were hired in January or February who would not ordinarily be hired until March or April. Similarly, people who bought their car in the winter months will not be buying another one in the spring.

The data adds credence to Dean's point, but only in part. Here's a graph of the industry groups he refers to -- construction (orange), restaurants (purple), retail (red), auto dealers (orange), and transportation (blue): 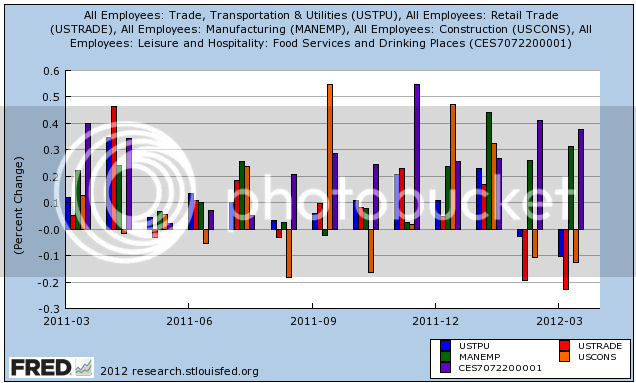 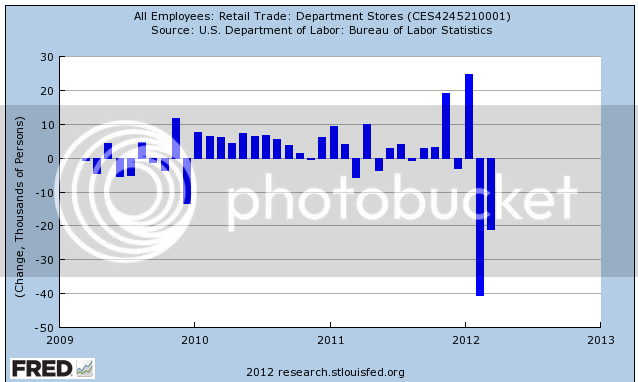 Losses were concentrated in department stores (pink), with smaller losses at electronic stores (green), grocery stores (purple), and online retailers (beige). There was reduced growth in auto dealers (blue) and home furnishings (red). In contrast, there was increased growth at lawn and garden centers (orange), and clothing stores (gray). If the weather were the decisive factor, we would have seen similar declines in building supply, clothing, and garden center stores, as well as restaurants (see first graph above, purple). We didn't: 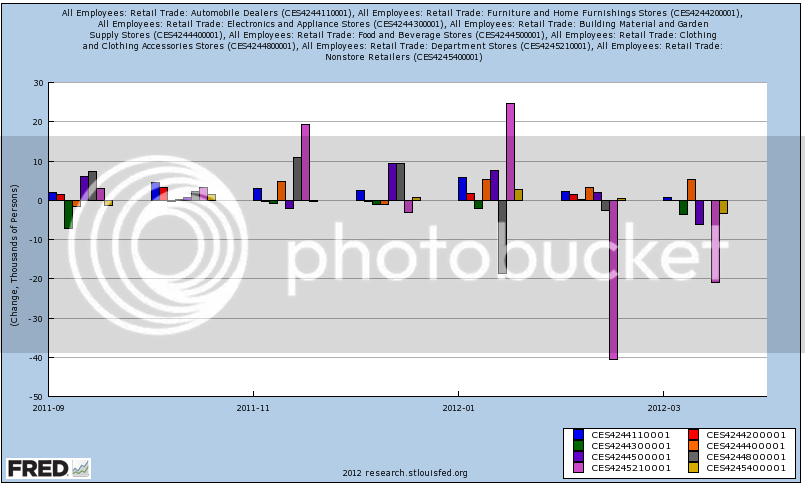 That the declines in retailing were concentrated in department and electronics stores suggests that consumers have increased their practice of showrooming. A local store may be visited, but the purchase is made online for a lower price. It is very likely this is one strategy adopted by especially younger consumers to minimize gasoline usage. For example, it has been reported that 52% of holiday shoppers engaged in showrooming. Items as mundane as cosmetics are now being repeat-purchased online. In other words, those retail businesses most vulnerable to showrooming took by far the biggest hit.

Next, let's turn to transportation (blue) and utilities (purple) employment. Despite the fact that railroads (red) are hauling much less coal than usual, due to a weather-related drop in demand from utilities, neither of those industries took an employment hit: 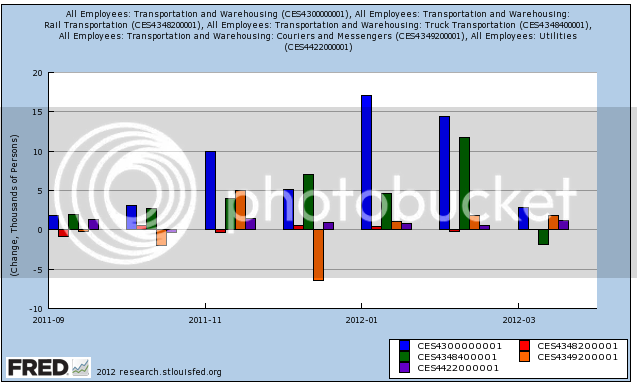 Weather probably did play a role here, as an unusual number of truckers (green) were hired in February, after which there was an actual decline in March. Finally, remember the hubbub about the surge in employment of couriers (orange) from the December report? It's been completely revised away..

Finally, let's look at professional and business services. These only added +31,000 jobs in March, well below February's +79,000 and similar advances in December and January. While legal (blue), accounting (red), architectural and engineering (green), programming (orange), and technical consulting (purple) services all hired less, the biggest factor by far was in employment services(blue-gray) (half of which are temporary services), which fell -14,200 in March after a 67,000 gain in February : 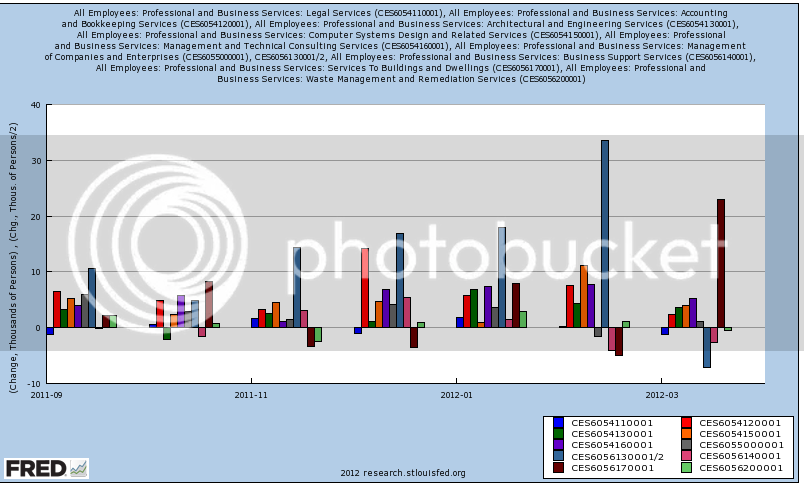 In fact, I've had to divide the change in employment services by two just to show the other changes in services. Employment service losses account for virtually all of the decline in growth, and half of that is in the leading sector of temporary jobs.

To summarize, while weather played a big role in the March miss compared with January and February, it may not be the BLS's seasonal adjustment at fault so much as miscalculations by the businesses themselves. When the increased business failed to pick up further, they stopped hiring temporarily (hence the employment services decline), and laid off some employees depending on how big a miss -- where the biggest miss was due to showrooming. If so, the weather related effects should only persist through April, while showrooming is probably here to stay for the duration of high gas prices. 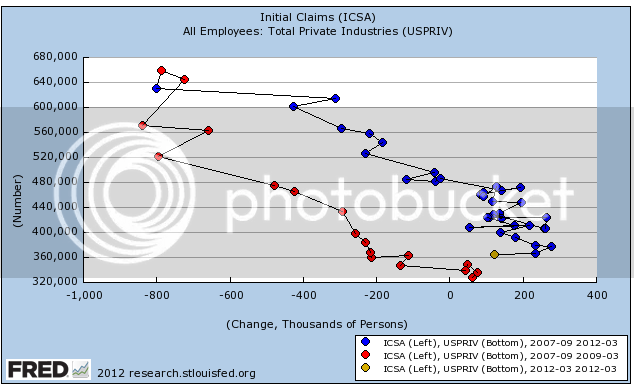 Going into the last recession, as is typical, hiring stops before significant layoffs begin. In the recovery, hiring in recovering sectors start before overall layoffs end. March's report moves us in the direction of the pre-recessionary pattern. That the two leading indicators in the jobs report -- manufacturing hours and temporary jobs -- both declined, adds further weight to the concern. Thus March's jobs report must be regarded as a yellow caution flag concerning the sustainability of the recovery.
Posted by New Deal democrat at 10:00:00 AM