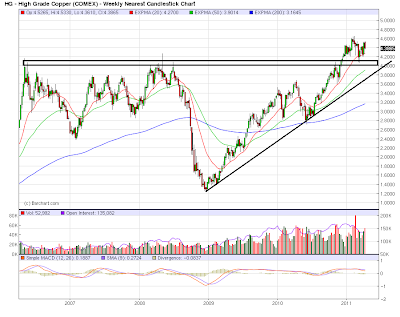 The five year copper chart shows that prices are in a strong uptrend and are also above the highs of the last five years. The 4-4.2 price area had been providing strong upside resistance over the long-term, but prices have moved through that resistance. The EMAs are very bullish -- the shorter are above the longer and all are moving higher. However, the MACD is fairly weak for a chart in this type of bullish posture. Ideally, we'd like to see a stronger move higher. However, notice the MACD has been in a fairly flat position for most of this rally so this is not a deal killer. Also note that after breaking through to new highs, prices consolidated gains by moving back to previous levels only to now bounce higher. But -- unlike the QQQs latest move -- copper prices advanced a bit after moving through resistance before moving lower. 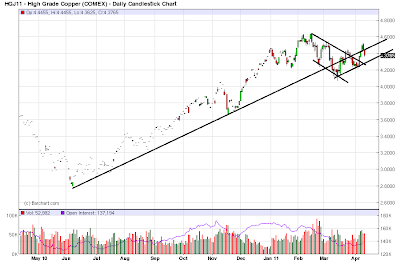 The main point with the yearly chart is how prices have recently formed a downward sloping pennant pattern and are now moving between the one year trend line and a lower trend line. Prices are having a hard time betting above the longer trend line. 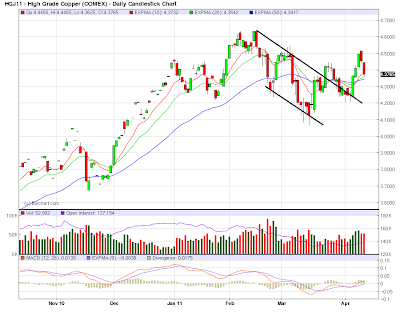 The shorter chart shows the latest action in more detail. Prices have broken out of their downward sloping channel, but they're not exactly in a strong move higher either. The EMAs are in a tight bunch and have been for about a month. The MACD has given a buy signal, but its upward angle is fairly weak. This chart shows a fairly indecisive mrket.

Consider these charts in combination with the following stories:

But Chinese buyers are now facing the double whammy of higher copper prices and the government's aggressive moves to tighten credit. Moreover, evidence has recently surfaced of previously unreported copper stockpiles, a sign that much of the purchased copper hasn't been put to use. The stash is estimated by people in China and several Western banks to be around one million tons, or about 15% of the country's annual consumption.

Copper is closely watched and has been given the nickname "Dr. Copper" because it is a proven bellwether for the health of the global economy. Since the metal is used in myriad industries, a strong demand often indicates that the overall economy is expanding.

Since reaching an all-time high of $4.6230 a pound on Feb. 14, copper's rally has stalled. At one point, the metal was down 11% from its high, though it has clawed its way back and closed at $4.4950 Friday on the Comex division of the New York Mercantile Exchange.

Official commodity inventories aren't readily released by China's government, forcing industry watchers to resort to other means—either physically scouting warehouses themselves or finding government sources—to try to determine just how much copper has actually been used.

The task has become even more daunting recently because companies and individuals have been hoarding commodities of all types—from cotton and copper to cooking oil—betting that prices will rise. With little insight into the stockpiles, analysts tend to overestimate China's real strength of consumption.

In late March, the market got a rare glimpse at the size of the potential copper overhang when the China Non-ferrous Metals Industry Association, a government-backed trade group, indicated the levels across the country could be as much as one million tons.

"The risk is that you end up with this overhang, which finally finds its way back" onto the market, said Leon Westgate, a London-based analyst at Standard Bank, who took a field trip to China last month to scout warehouses. He said he saw a glut of copper in warehouses just along the coast, which he estimates at about 700,000 tons. That "intensified" his negative feelings about copper, he said.

Alphaville also has some stories on this situation.

The data indicates there may be a fair amount of speculative excess built-into copper's price right now, which would lead to at best sideways movement for the next few weeks.

Also note there are caution flags on the fundamental side. China is raising interest rates, and Japan's supply chain is broken. Both of these factors could lead to a slowing of the world economies, lowering the demand for copper.
Posted by Unknown at 3:11:00 PM