While the latest Fed Minutes were very encouraging, there were concerns raised about commodity prices:

Overall consumer prices in the United States rose somewhat faster in December and January than in earlier months, as consumer energy prices posted further sizable increases and consumer food prices responded to the recent upturn in farm commodity prices. The price index for PCE excluding food and energy (the core PCE price index) rose slightly in January, boosted by an uptick in prices of core goods after four months of declines; the 12-month change in this core price index stayed near the very low levels seen in late 2010. Recent surveys showed further hefty increases in retail gasoline prices in February and early March, and prices of nonfuel industrial commodities also rose sharply on net. According to the Thomson Reuters/University of Michigan Surveys of Consumers, households' near-term inflation expectations increased substantially in early March, likely because of the run-up in gasoline prices; longer-term inflation expectations moved up somewhat in the early March survey but were still within the range that prevailed over the preceding few years.

As such, this is a good time to look at the impact of energy prices on the economy. Consider this chart of the year over year percentage change in the energy component of CPI: 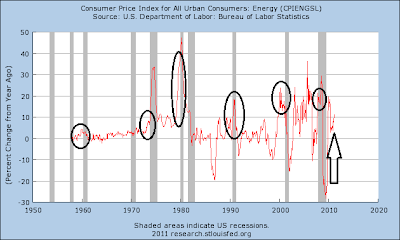 This chart shows some very interesting characteristics. First, note how prices have become more and more volatile. In the 1960s energy prices were constant. In the 1970s we experienced two oil price shocks that led to recessions. Also note that the YOY number started to print higher numbers. Prices settled down at the beginning of the 1980s, but then became more volatile as the 1990s approached. Note the big run up in prices at the end of the 1990s and the heightened volatility that occurred in the 2000s.

For more of Professor Hamilton's work see this article and this PDF link.
Posted by Unknown at 8:30:00 AM