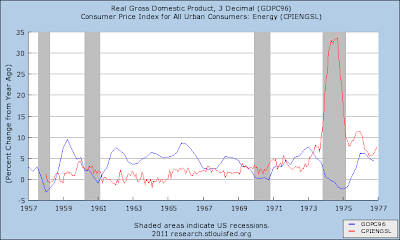 From 1957-1977, the US economy could handle YOY energy price swings of 10% and still have positive GDP growth. However, in the early 1970s energy prices increased over 30% on a YOY basis which had a strong negative effect on the YOY GDP growth and helped to cause the recession that ended in 1975. 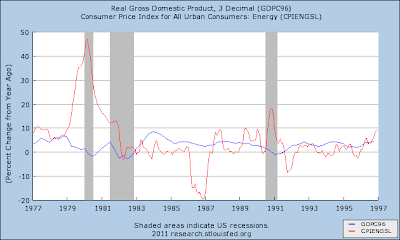 The chart from 1977 to 1997 shows two more periods when a large increase in the YOY percentage change in energy prices led to a recession. Energy prices spiked nearly 50% in the late 1970s, leading to one and probably the second recession. Energy price also spiked nearly 20% on a YOY basis during the recession that occurred in the early 1990s. However, the YOY spike occurred during the recession rather than before it. However, the fact the country went to war quickly may have had something to do with that slowdown. 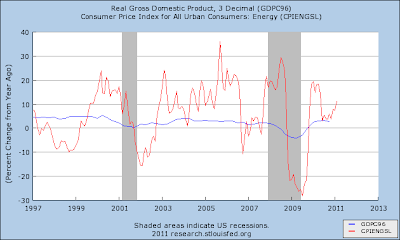 The above chart shows that energy prices have become far more volatile over the last 15 years. However, note this volatility does not always lead to recession. During the expansion earlier this decade, oil prices rose at historically high year over year rates, yet the economy did not fall into recession.

The above charts show that over the last 50 years, energy prices have become more volatile. But -- just as importantly -- the economy has developed the ability to absorb the extreme shocks. This does not mean absorbing the volatility is easy. In fact, I would argue it probably hinders growth to a mild extent. But recent evidence indicates it is not fatal.
Posted by Unknown at 8:30:00 AM