Last week, I wrote that I expected upside gains on oil to be limited, based on higher oil prices denting demand, the then increasing possibility of a Libyan resolution and China's efforts to cool their economy. I also stated that $110/bbl was a a price level to watch out for. I clearly misjudged the Libyan situation, as the fighting continues and an oilfield fire on Friday helped spur prices above the 110 level. The dollars decline is also helping to move prices higher. However, the average retail price of gas continues to increase, and is currently at $3.68/gallon. In addition, there is ample supply in the US and energy inflation is starting to negatively impact consumer sentiment. 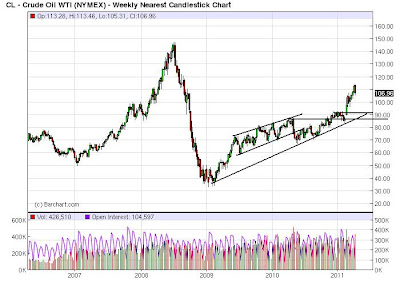 On the 5-year chart, remember that prices are still in a clear upswing. Prices bottomed at the beginning of 2009 and have been in a general, long-term rally since. Recently, prices have broken above the $90/bbl level in a strong rally, printing strong bars and moving above resistance in a convincing manner. However, this move has led to fundamental concerns, perhaps putting a limit on oil's upward moves. 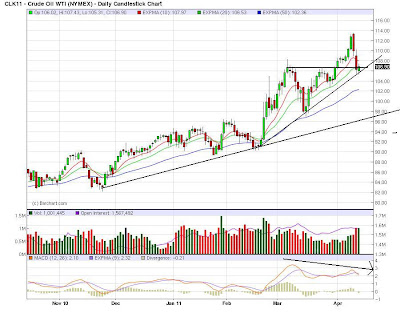 The 6-month chart shows two upward sloping lines. The first, started at the end of November and has a slight angle, while the second started at the end of March and has a much stronger angle. Also note the EMAs are very bullish with the shorter above the longer. However, the MACD has printed decreasing peaks and prices are right at technical support. A move breaking the current trend line would lead to a price target of the 50 day EMA. 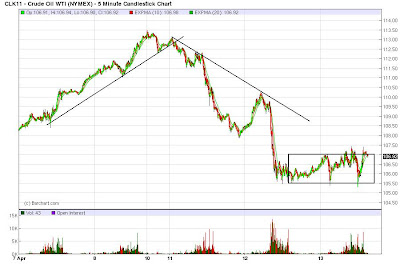 Going forward, I would expect prices to continue moving lower. However, I would view this as a temporary development. The lower MACD print, strong downward candles and increased volume on the latest sell-off indicate profit taking is in order.

While there are signs of a slowdown, no one (except those who can't help themselves) is calling for a recession. Instead, analysts are noting that high oil prices will lead to lower growth.

In addition we are moving into the summer driving season, which historically leads to higher demand and therefore higher prices.
Posted by Unknown at 3:02:00 PM