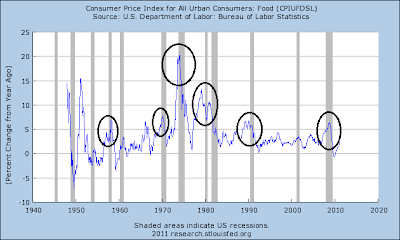 The above chart is a long-term chart of the year over year (YOY) percentage change in the food component of the CPI. Like the energy component of this measure, notice the large spikes we see before or during six of the last recession over the last 60 years (post WWII). This tells us the -- like energy prices -- food price spikes can have a strong correlation with recessions. Let's look at smaller parts of this graph to get more of an idea for the underlying detail 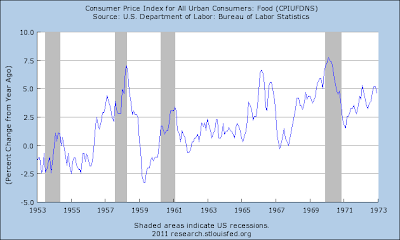 On the above chart, first notice the left had YOY percentage numbers. These are very low -- in the realm of 2.5%-5%. However, consider these changes on a relative basis. If the economy is used to a 0% YOY increase in food prices and then prices start to increase between 5% and 7.5% on a YOY basis, people will start to notice the change. 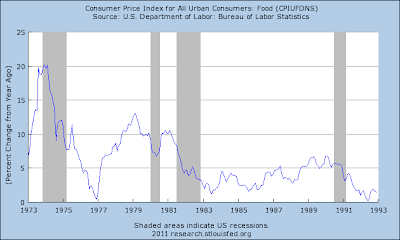 On this chart, the first point to make is to take the different left handed scale into consideration -- now we see YOY price increases of 20% before the early 1970s recession and YOY price spikes of over 10% for the double dip recession at the beginning of the 1980s. The YOY increase prior to the 1990s recession was around 5%. While this is high, the oil spike caused by the Iraq war was probably the leading cause of that recession. 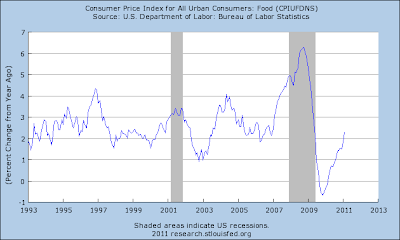 Finally, notice the scale has again changed to smaller numbers.

While we saw the YOY number increase prior to the early 2000s recession, the increase only reached 3%. In addition, this number was actually higher during the expansion, indicating an increase of 3% probably wasn't enough to be a primary cause of the early 2000s recession. However, the price spike before and during the last recession leads to the conclusion that food price spikes were at least a contributory cause of the recession (although obvious other factors such as the near-collapse of the US financial system were undoubtedly the leading cause).

While food prices get less headline space than gas prices, they appear to be no less important in contributing to recessions over the last 60 years.