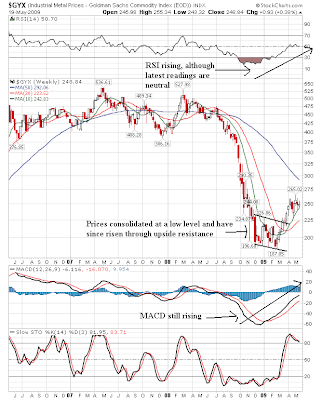 Like all commodities, industrial metals took a nose-dive at the end of last year. Since then prices have consolidated in a sideways moving rectangle pattern and risen through the upside resistance line of that pattern. The MACD and the RSI are still rising, although the RSI has moved sideways for the last few weeks. Finally, prices are moving into the 10 week SMA and the 10 and 20 week SMAs are moving higher. 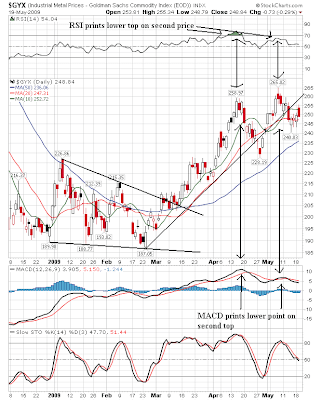 The daily chart better shows the consolidation of the last few weeks. Notice that prices have a slight upside bias but are really mired in a consolidation pattern. The MACD and RSI printed a lower number on the second top of the last month and a half, indicating an overall weakening. But prices have not crashed or moved significantly lower, indicating traders are contemplating their next move. The stochastics -- which are a better indicator in a trending market -- are printing a total right at 50. Although the long-term average is still moving higher (the 50 day SMA), the 10 and 20 day SMA are moving sideways. In addition, prices are tightly bound with the SMA indicating a lack of overall direction. 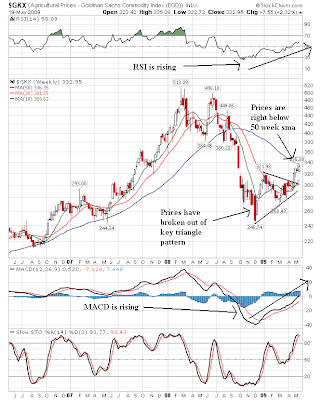 Like all commodities, agricultural prices took a nose-dive at the end of last year. Since then prices have consolidated in a triangle pattern and risen through the upside resistance line of that pattern. Prices are right below the 50 day SMA. A move through this level would be an important technical development. However, the 10 and 20 week SMA are tied in a tight range and neither is moving higher right now. 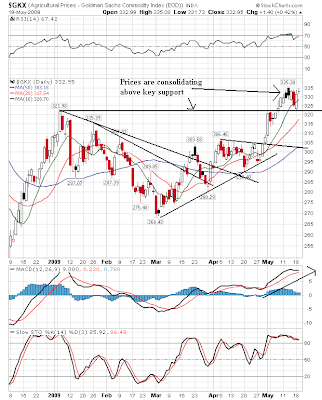 The daily chart is very interesting. Prices are consolidating above an important technical level. In addition, the RSI is printing right below 70 and the MACD is still rising (although it may be moving to give a sell signal soon). However, the price/SMA picture is very bullish -- prices are above all the SMAs, the shorter SMAs are above the longer SMAs and all the SMA are moving higher.
Posted by Unknown at 6:35:00 AM