Industrial production decreased 0.5 percent in April after having fallen 1.7 percent in March. Production in manufacturing declined 0.3 percent in April and was 16.0 percent below its recent peak in December 2007. The decreases in manufacturing in April remained broadly based across industries. Outside of manufacturing, the output of mines fell 3.2 percent, as oil and gas field drilling and support activities continued to drop. The output of utilities moved up 0.4 percent. At 97.1 percent of its 2002 average, industrial output in April was 12.5 percent below its year-earlier level. The capacity utilization rate for total industry fell further in April, to 69.1 percent, a low over the history of this series, which begins in 1967.

The report has little good news. The best part of the report is the rate of contraction is the lowest in 6 months:

But consider the following charts: 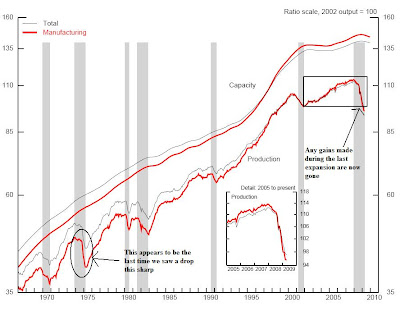 Any gain made in industrial capacity during the last expansion is now gone. In addition, the only time we have seen a drop of this size was in the mid-1970s. The inner chart shows the severity of the drop.

We are now using the least amount of industrial capacity in the last 40 years. This means that when the economy starts back up there is little reason for business to heavily invest because there's so much spare capacity to utilize. 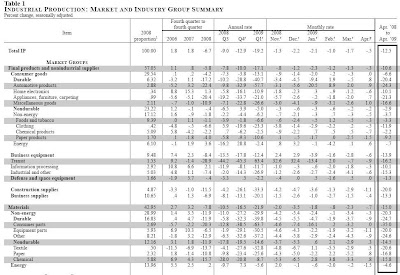 Finally, notice the auto industry is taking it on the chin in a big way:

About the only positive is the is the best reading we've gotten in the last 6 months.
Posted by Unknown at 10:00:00 AM