About the Consumer Driving Growth....

The core of Keegan's strategy is retrenchment by U.S. consumers as they go from their debt-enabled buying binge of the last decade to balance-sheet repair. He figures the process won't stop until the consumption portion of gross domestic product shrinks from more than 70% now back to its long-term average around 65%.

That process may already be occurring. According to the Federal Reserve, consumers slashed borrowing in March by the largest dollar amount since the government started keeping track in the 1940s.

A few percentage-points worth of spending relative to GDP doesn't seem like a lot, unless you are talking about a $14 trillion economy. "I've always been of the theory that if you get the consumer right, you're going to get U.S. GDP right and you'll get the trend in global GDP right," Keegan says.

This is a common thought among a wide swath of economists -- that the US consumer isn't going to be the engine of growth he's been over the last few expansions.

To that end, consider this graph (click for a larger image): 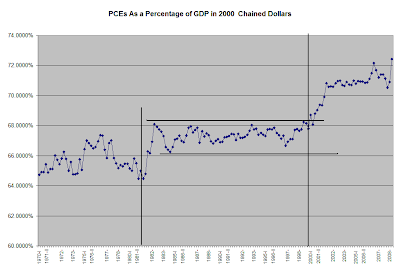 This is a chart going back to the first quarter of 1970. It uses chained 2000 dollars to determine the percentage of personal consumption expenditures of GDP. Notice that in the latest expansion, PCEs increased their percentage of GDP by 400 basis points. That's a lot.
Posted by Unknown at 12:05:00 PM