F. Hale Stewart is a financial adviser with Thompson Creek Wealth and a transactional attorney, specialising in asset protection and advanced tax planning.

Reports from the twelve Federal Reserve Districts indicate that the economy continued to expand across most regions from early October through mid-November. Activity in the Boston, Minneapolis, and San Francisco Districts grew at a moderate pace, while Atlanta, Chicago, St. Louis, and Dallas cited modest growth. Philadelphia, Cleveland, and Kansas City cited a slight pace of growth. Richmond characterized economic activity as mixed, and New York said activity has remained flat since the last report. Outlooks were mainly positive, with six Districts expecting moderate growth.

Demand for manufactured products was mixed during the current reporting period, with the strong dollar being cited as a headwind to more robust demand in a few Districts. Modest to moderate increases in capital investment are expected in several other Districts. Business service firms saw rising activity, especially for high-tech and information technology services. Reports from ground freight carriers were mixed, while port cargo increased. A majority of Districts reported higher retail sales, especially for apparel and furniture. New motor vehicle sales declined in most Districts, with a few Districts noting a shift in demand toward used vehicles. Tourism was mostly positive relative to year-ago levels. Residential real estate activity improved across most Districts. Single-family construction starts were higher in a majority of Districts, while multifamily construction reports were mixed. Activity in nonresidential real estate expanded in many Districts. Banking conditions were largely stable, with some improvement seen in loan demand. Farmers across reporting Districts were generally satisfied with this year's harvests. However, low commodity prices continue to weigh on farm income. Investment in oil and gas drilling increased slightly, while reports on coal production were mixed. A tightening in labor market conditions was reported by seven Districts, with modest employment growth on balance. Districts noted slight upward pressure on overall prices. 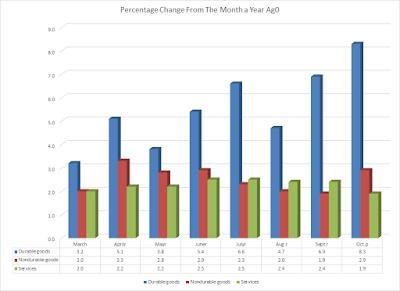