One of the hallmarks of Doomers is that a data series is only worth reporting if it shows that we are DOOOMED.  When it turns positive, it is no longer worth mentioning.

Such is the case now with the Cass Freight Index, a monthly trucking report.  It turned down badly early in 2015, and remained negative YoY since then, although it had gotten "less worse" in the past few months.

If this sounds familiar, it is because the weekly railroad loading report from the AAR has had the same trajectory. Basically the Cass Freight Index is useful as confirmatory of the much more timely AAR reports, but the AAR reports are much more timely, since they are reported weekly with less than a 7 day lag, which the Cass index is reported once a month somewhere in the middle to latter part of the ensuing month.

Since the weekly AAR reports had been tracking neutral to positive over the last month, I was waiting to see if the Cass Trucking report would confirm them -- and what the Doomer reaction would be.

Well, the wait is over, because here is the latest Cass Freight Index graph: 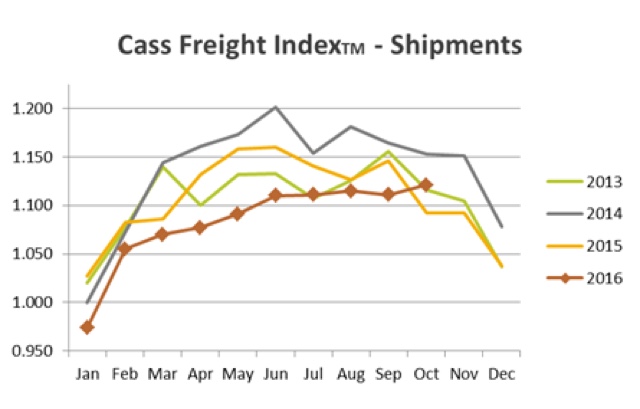 And the Doomer reaction -- radio silence.

The "shallow industrial recession" of 2015 is long gone, and the YoY measures are finally turning positive.  This is a good time to remind you of one of my consistent themes: that YoY data will lag turning points. My rule of thumb is that unadjusted YoY series have probably made a top or bottom when the YoY change is reduced to less than 1/2 of what it was at its maximum.

Meanwhile the Doomers will move on to the next metric which at the moment shows that we are DOOOMED!
Posted by New Deal democrat at 8:44:00 AM