Last week’s column focused exclusively on Chairperson Yellen’s most recent Congressional testimony where she convincingly argued for a rate hike in the near future.  Markets interpreted this to mean at the December meeting.  In this week’s column, I will look at the 4 primary coincidental indicators along with a broad selection of labor market and price indicators to demonstrate that the data supports a rate hike in the next few months.

Turning to the labor market, the Atlanta Fed’s Spider Chart shows a variety of indicators in a convenient format: 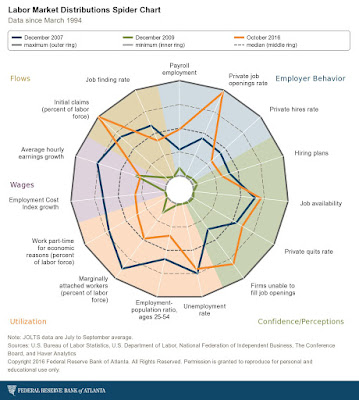 The chart above plots 15 different employment indicators covering 6 different labor market data categories at three different times: the height of the last expansion (dark blue), the depth of the recession (light green) and current levels (gold).  Clearly, current conditions are far better than the depths of the last recession.  Confidence, employer behavior and flows are as high as or just below previous highs.  But recent utilization and wage levels are below the heights of the previous expansion.  It’s more likely that weak utilization rates are causing weak wage growth.  This, oddly enough, helps the fed because weaker wages lowers inflationary pressure.  But weakness in these two areas aren’t sufficient to prevent a rate hike.

And finally, we have prices:

The above data, in combination with the recent rise in inflation expectations, all point to rate hikes in the future.