Marking my 2014 forecast to market: I plead the polar vortex

In my forecast for 2014 one year ago, I called for continued growth, but "A year of deceleration":


In conclusion, unless we expect deflation (and right now I don't), there is every reason to view the long leading indicators, under either method, as being in agreement that the economic expansion will continue through the end of 2014.

On the other hand, the deceleration of most of the indicators, and also the deceleration of the WLI, cause me to believe that the second half will be considerably weaker than the first half....  But ... I look for continued positive readings in employment, wages, industrial production, and GDP through the year.

My forecast for continued growth this past year was certainly borne out.  Both the short and long leading indicators one year ago were positive, and correctly forecasted continued growth -- with one obvious exception!  Thank you, Polar Vortex! - with an assist from the BEA in estimating the impact of Obamacare on health care spending.

Thanks to that same Polar Vortex, instead of "deceleration," the 3rd quarter was the third best quarter since turn of the Millennium 15 years ago, and the combined 2nd and 3rd quarters have only been exceeded one time - in late 2003 - during that period (at the moment, the Atlanta Fed's "GDPnow" function is forecasting about 3% growth in Q4): 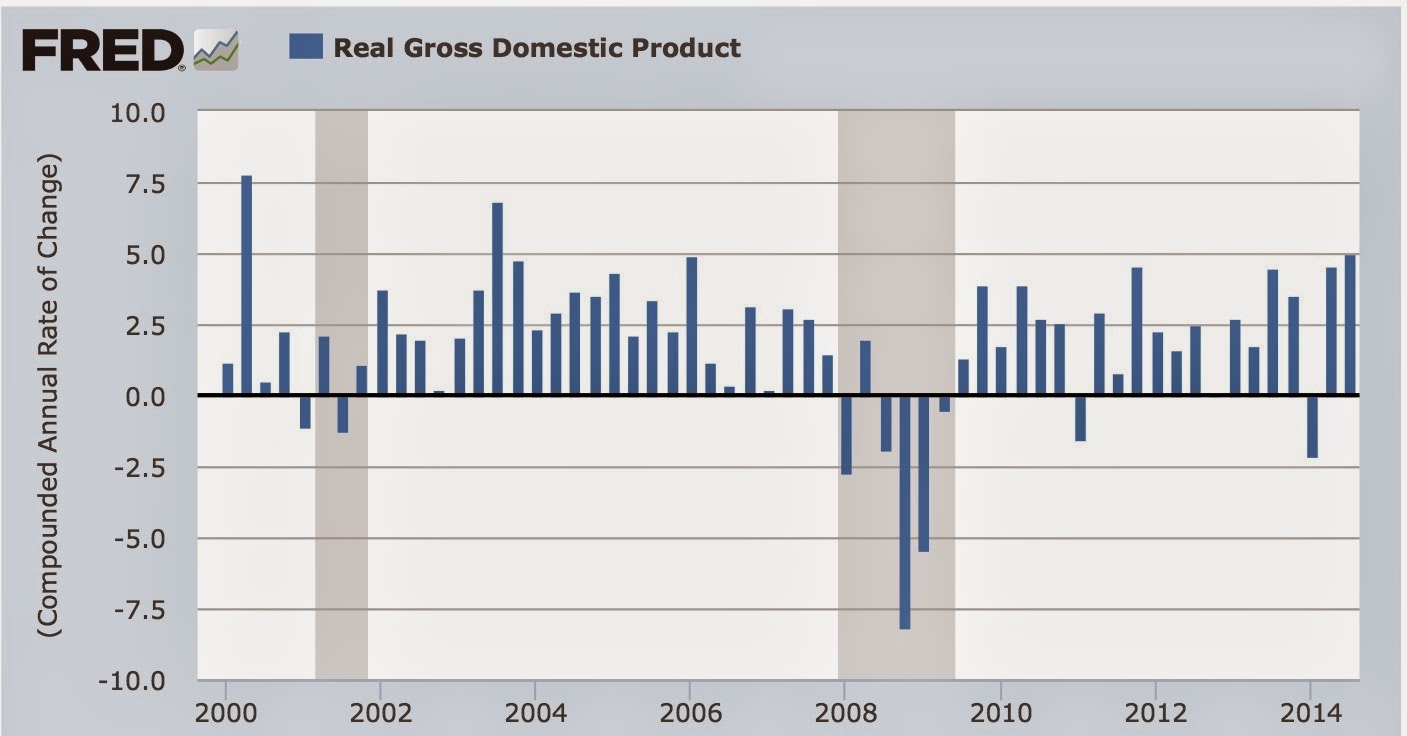 In short, as we all know, the economy did a total faceplant in the first quarter, due mainly to the infamous "polar vortex" - the worst winter in over a decade in most of the US - and secondarily by the BEA's attempt to estimate the impact of Obamacare on health care spending.

Obviously "deceleration" was out the window after a first quarter performance like that. So I plead the Polar vortex in my defense.

Next, let's look at the same GDP data as in the first graph, but YoY: 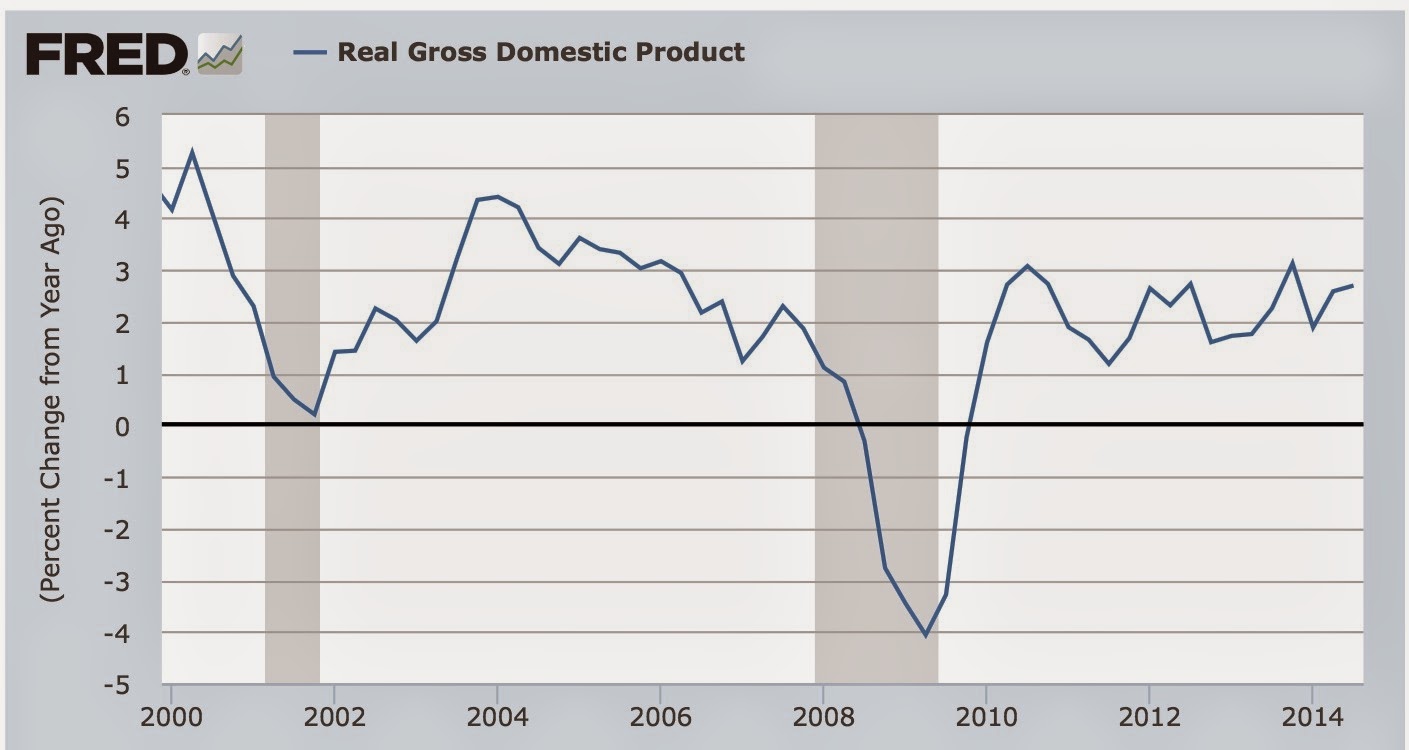 Now the first three quarters of 2014 don't look like much of a change at all from 2013.  Smoothed over a year, the Q1 debacle basically offset the Q2 and Q3 fireworks.  But that still isn't deceleration.  That's because there was a second major trend at work as well, and it is a trend that I expect to continue to (positively) affect the economy in 2015. That, dear reader, is our old friend government spending.

Here is a graph of spending on health care services (blue) and government expenditures at all levels (red): 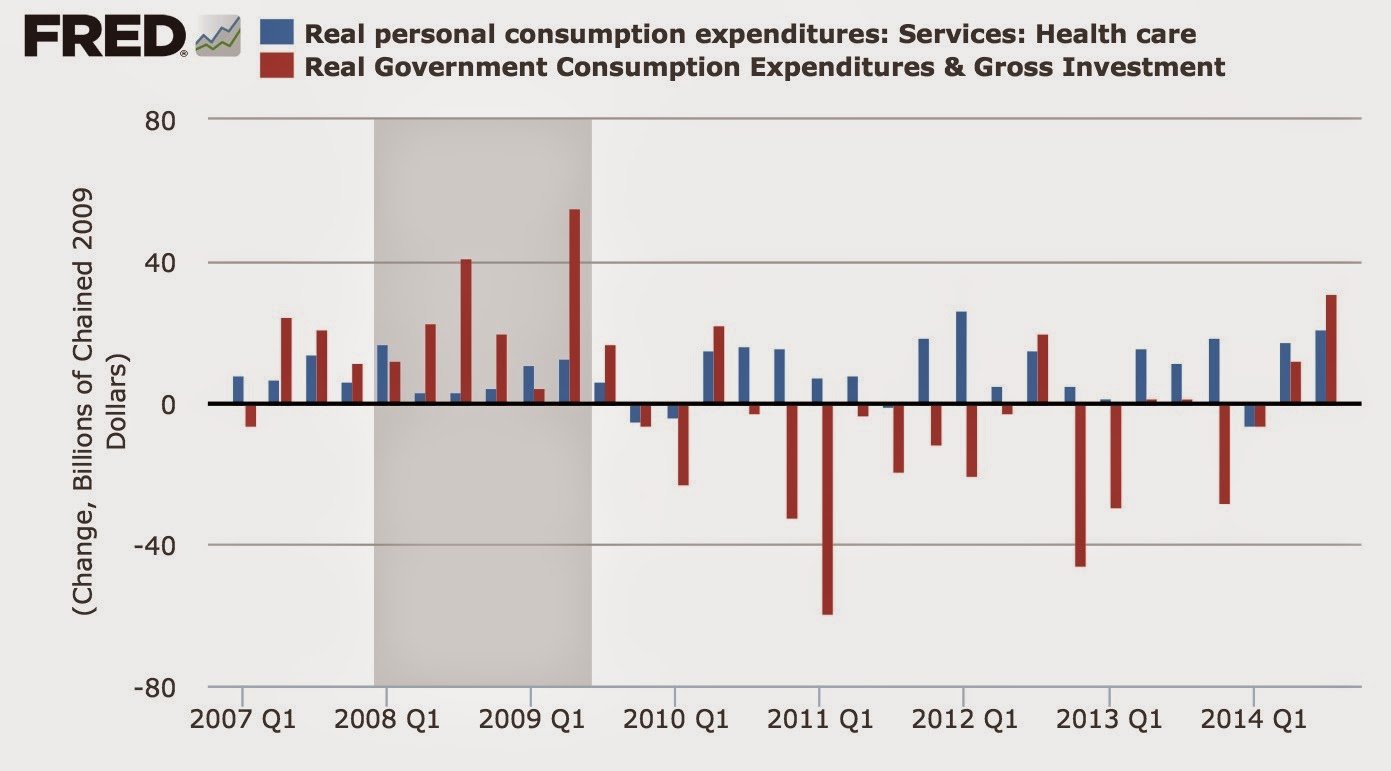 I saw a Doomer piece claiming that the government cooked the books as to health care expenditures in order to show great numbers in Q3 vs. Q1. Aside from being political nonsense (if you are going to cook the books, why make them look worse before the election, and only better after???), the above graph shows that health care expenses simply returned to their prior range of growth. The real, impactful change over the last year has been government spending. 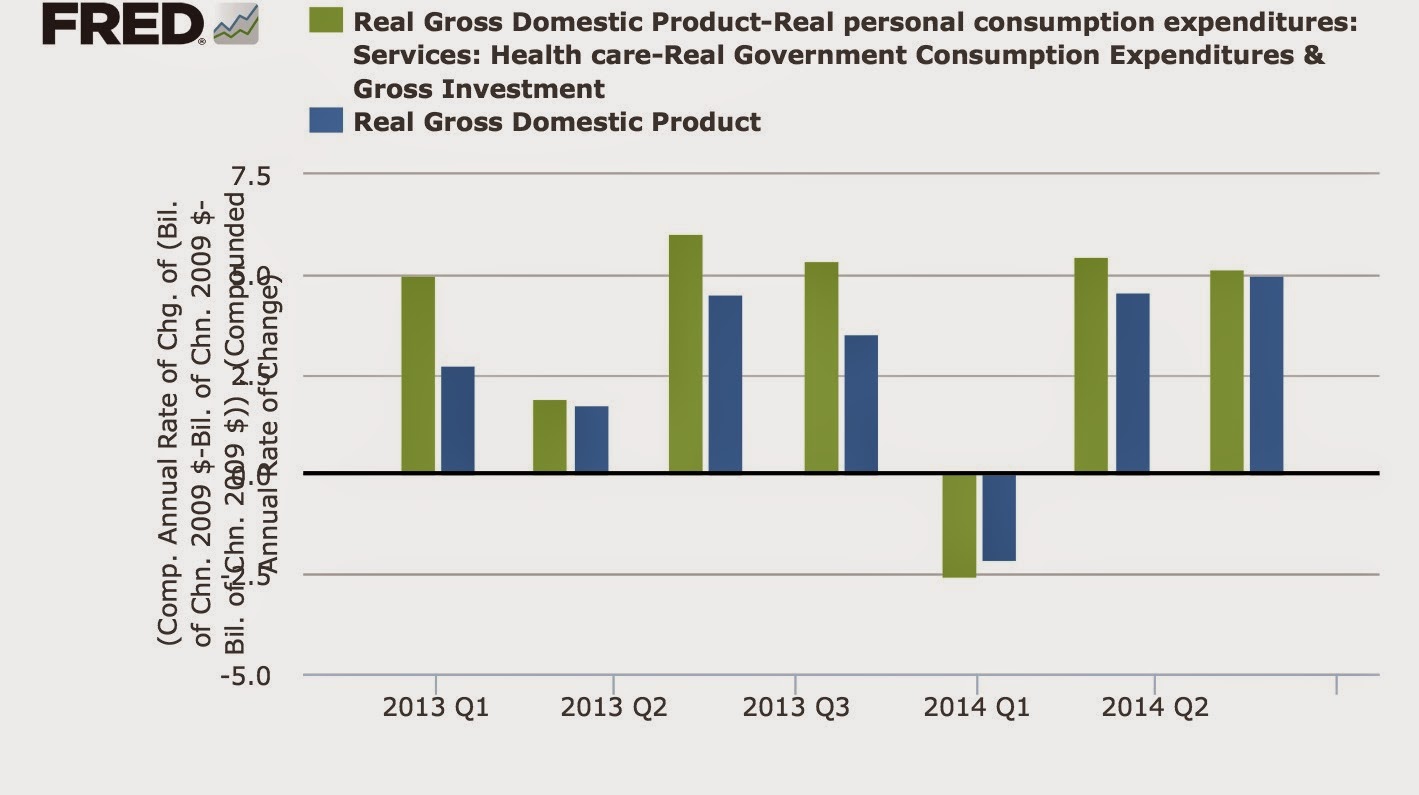 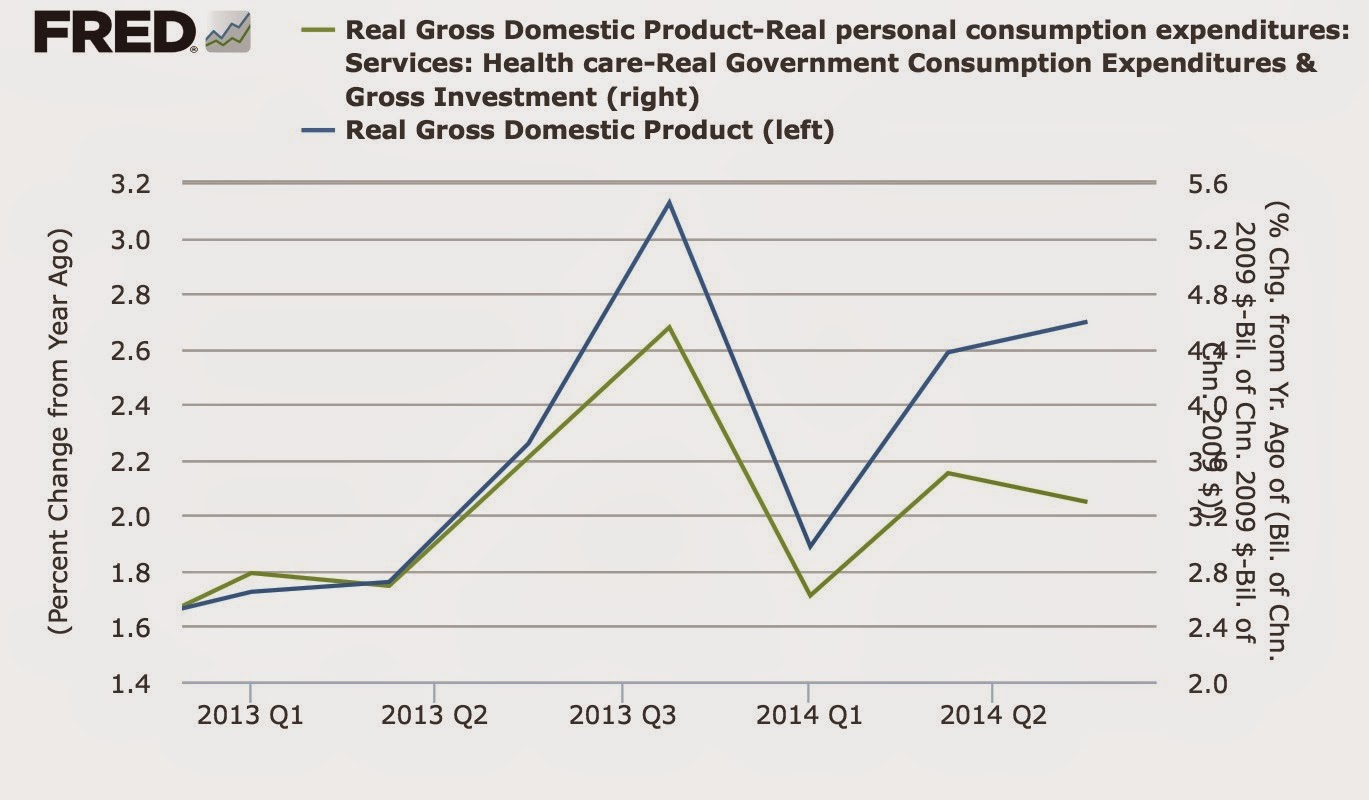 In short, take away government spending, and we DID have deceleration in 2014 compared with 2013, even ignoring the outlier first quarter.

Here is the breakdown of government spending between Federal (red) and state and local (blue): 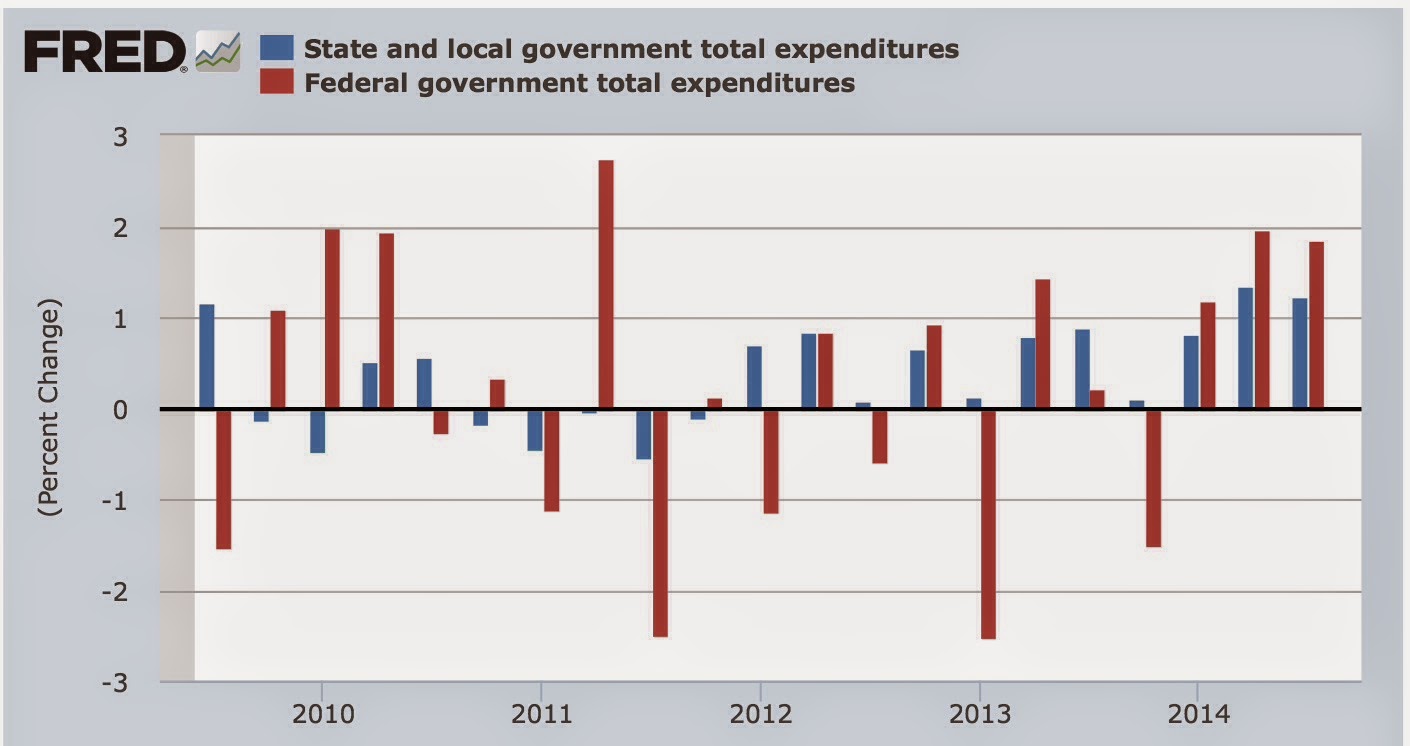 Both levels of government have helped, but easily the Federal level was the biggest change,and the biggest contributor.

Finally, let's add in private residential spending (housing) to the above graph: 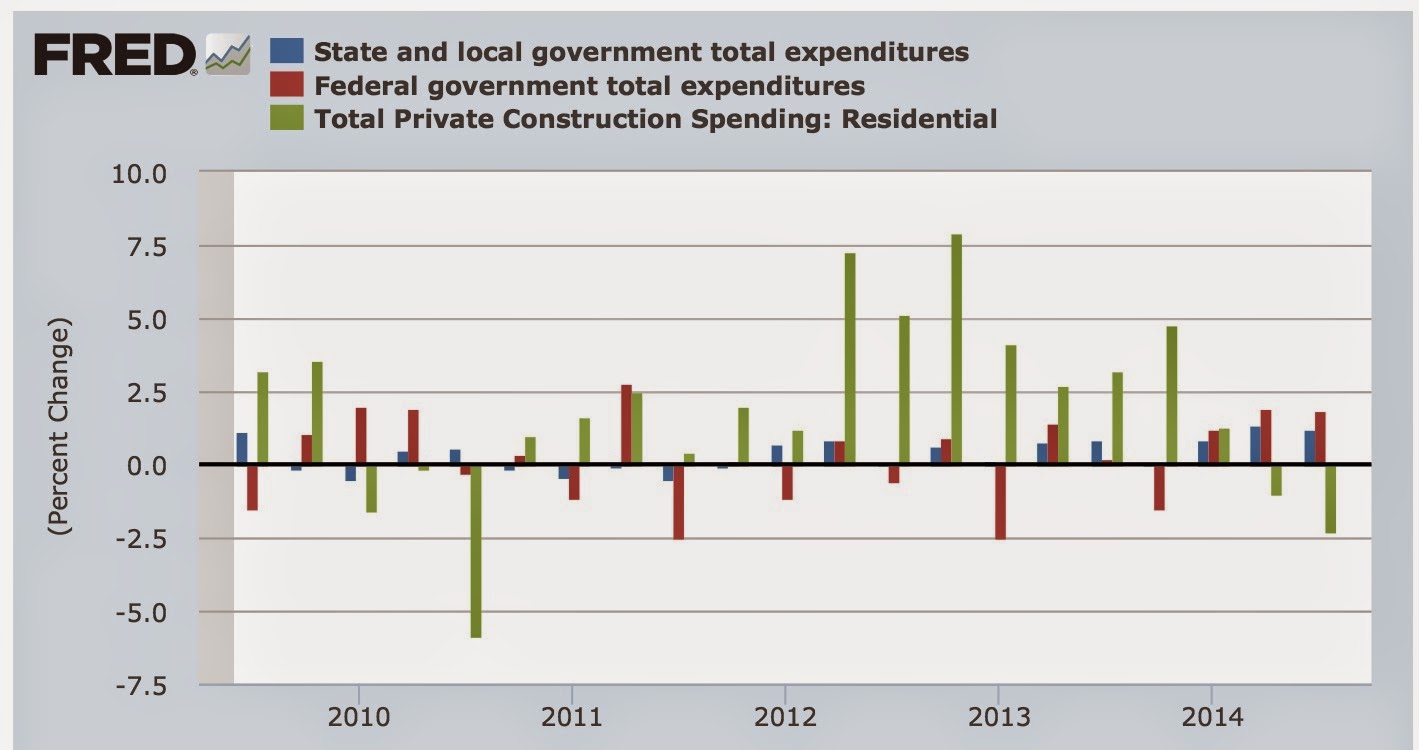 What happened in 2014, aside from a rebound from the first quarter Polar vortex faceplant, was that government spending completely offset the sharp deceleration in spending on housing.  This will continue to be important in 2015.
Posted by New Deal democrat at 8:30:00 AM