Civeo: Not Really A Value Play

Before reading any further: this is just my opinion.  I'm not asking anyone to buy or sell this security.  Do your own research and come to your own conclusions.

Over at Seeking Alpha, Connor Gannon has a very interesting article up about a company called Civeo, which is currently trading at a very deep discount to its book value.  Mr. Gannon is using standard Graham and Dodd valuation; total assets minus total liabilities equals book value which he then divides by the number of shares outstanding.  However, he goes a few steps further in his analysis by completely discounting goodwill and intangible assets to arrive at a more realistic valuation.  Personally, I have a strong dislike for goodwill; until you actually put a company on the market and allow suitors to deeply analyze a company, goodwill is at best a highly hypothetical value.  And doing the same for intangible assets is also prudent.

By my back-of-the-envelope numbers, the company has a per share book value of $11.47 (I'm using standard assets-liabilities with no adjustments) with the stock currently trading a bit under $4.  Even with some serious adjustments to the balance sheet assets to account for the distressed nature of this particular industry (for example, lowering the value of AR and inventory to account for potential "fire sale" valuations), I think it's safe to say we really do have a classic situation with the stock trading below book value.

However, by looking deeper into the situation, I would have to respectfully disagree with Mr. Gannon on the potential of this company.  First, what exactly does the company do?  According to their latest 10-Q:

We are one of North America’s and Australia’s largest integrated providers of accommodations services for people working in remote locations. Our scalable modular facilities provide long-term and temporary work force accommodations where traditional infrastructure is insufficient, inaccessible or not cost effective. Once facilities are deployed in the field, we also provide catering and food services, housekeeping, laundry, facility management, water and wastewater treatment, power generation, communications and redeployment logistics. Our accommodations support workforces in the Canadian oil sands and in a variety of oil and natural gas drilling, mining and related natural resource applications as well as disaster relief efforts, primarily in Canada, Australia and the United States. We operate in three principal reportable business segments – Canadian, Australian and U.S.

Let's place their business into the oil field development timeline.  The oil field is first developed which in turn attracts oil field workers, leading to a need for Civeo's services.  Conversely, when the oil companies cut back on expenses, Civeo is one of the first companies to be negatively impacted.  Or, they are one of the last companies on the way up to be brought in and one of the first to be hurt when the situation turns negative.

This timeline creates a big problem for the company because it compresses the time during which they can exploit a market.  Rather then being present for the entire development process, the company is only able to earn a return for a smaller sliver of time.  And, in the event of a price collapse like that which has already occurred, the company is hurt that much faster.

They also face a second problem that is geographic (again from the 10-Q):

Our business is predominantly located in northern Alberta, Canada and Queensland, Australia, and we derive most of our business from resource companies who are developing and producing oil sands and met coal resources and, to a lesser extent, other hydrocarbon and mineral resources. More than three-fourths of our revenue is generated by our large-scale lodge and village facilities.

Canada has some of the most expensive oil field development real estate in the oil world.  Consider this chart from the Econbrowser website: 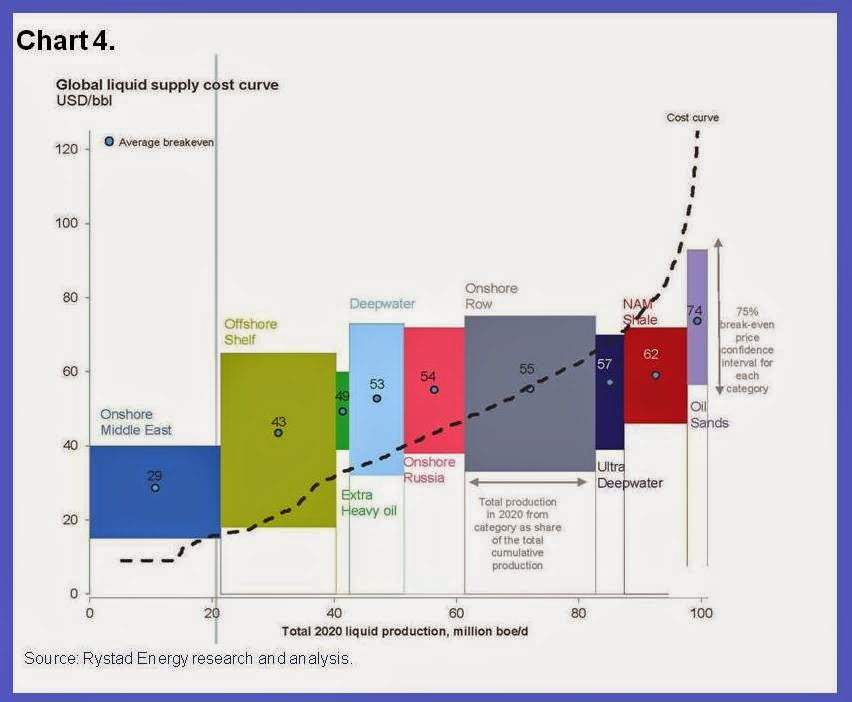 The oil sands of Canada have a roughly $74/bbl breakeven point for development.  Oil closed at $52.81 on Friday.   That does not bode well for CVEO's current operations.  And, we've already seen a fair amount of budget cut announcements from oil companies as highlighted in this Reuter's article.

Mr. Gannon's article highlights an often unspoken truth about "value investing."  In the modern market environment when there is a wealth of information available to all investors, finding a company that is actually trading below its book value is a very rare event.  In fact, it usually only occurs when there is either a fundamental problem with the company or an entire industry is going through a difficult period like the current situation in the oil market.  It is the latter situation that has lead to CVEO's weak price.   And, as Mr. Gannon correctly points out, the stock is trading far below its book value.  But, given the company's position in the oil field development timeline and its reliance on one of the most expensive oil fields to develop for company revenue, I don't think this is a good time to take a long position.