So why not just look at the unemployment rate and call it a day? Because special factors in play right now make the jobless rate an inadequate measure of slack....

There are at least two special factors that are distorting the unemployment rate’s signal....

Bernstein's column predictably unleashed another brushfire of  "the unemployment rate is phony" commentary by the usual Doomers.  While I respect Jared Bernstein and generally find his commentary interesting and accurate, in this case I strongly disagree. And I have data in support of my point.

Let me take his two "special features" in order.  He says:


First, there are over seven million involuntary part-time workers, almost 5 percent of the labor force, who want, but can’t find, full-time jobs. That’s still up two percentage points from its pre-recession trough. Importantly, the unemployment rate doesn’t capture this dimension of slack at all — as far as it’s concerned, you’re either working or not. Hours of work don’t come into it.

Every single month for the last 60 years, the Census Bureau has  counted those "who want, but can't find, full-time jobs."  During that time, on 9 occasions the economy has gone through a recession where the unemployment rate exceeded 6%.  Nine separate times, the unemployment rate has thereafter declined to under 6%.

So, let's do a true apples-to-apples comparison.   When the unemployment rate crossed the 6% threshold to the downside, what percent of the civilian labor force "wanted, but couldn't find, full-time jobs?"  That's what the below graph shows.  The unemployment rate is in red, and I've subtracted 6 so that it crosses the black 0 line at 6% unemployment.  The percentage of the civilian labor force that is working part-time, but wants full-time work is in blue.  As of yesterday, that was ~4.55%, so I have subtracted that percentage to place that at zero as well: 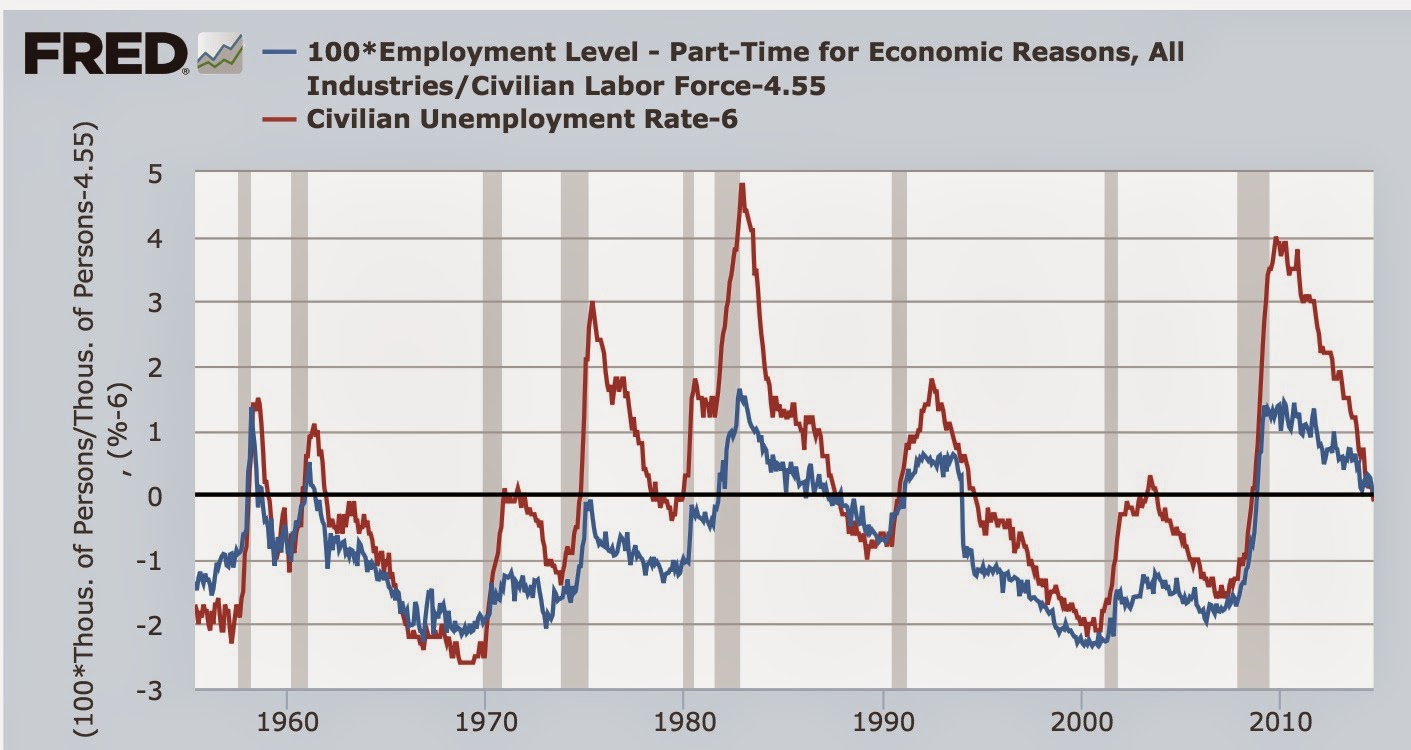 In 7 of the 8 prior cases, when the unemployment rate crossed 6%, involuntary part-time employment was about 1% less than it is now.  The 8th time is telling:  following the 1982 recession, which at its trough featured an employment rate even worse than that of the Great Recession, it took until August 1987 for the unemployment to fall to 6%.  That month the percentage of the labor force that were involuntarily working part time jobs was ~4.43%, only 0.1% lower than yesterday's rate.

In other words, what we are seeing now is conquerable to what we saw in the recovery from the severe 1982 recession, and only 1% higher than during recoveries from less severe recessions.  If we use a back-of-the-envelope approximation that part time workers are averaging about 1/2 the number of hours of full time workers, that gives us an increase in the unemployment rate compared with recoveries from more typical recessions of about 0.5%, or a hypothetical 6.4% unemployment rate with a typical mix or full time to part time employees in an apples to apples comparison.


The second special factor masking the extent of slack as measured by unemployment has to do with participation in the labor force. Once you give up looking for work, you’re no longer counted in the unemployment rate, so if a bunch of people exit the labor force because of the very slack we’re trying to measure, it artificially lowers unemployment, making a weak labor market look better.

While we only have data going back 20 years, still in every single month since then, the Census Bureau counts those who have entirely stopped looking, and dropped out of the labor force, but want a job now.

In the graph below, I have again subtracted 6 from the unemployment rate, so that it crosses the 0 line at 6%.  Percentage of those who have left the civilian labor force, but still want a job now, compared with the labor force (blue) as of yesterday was about 4%, so I have subtracted that percentage to show it at 0 as of yesterday: 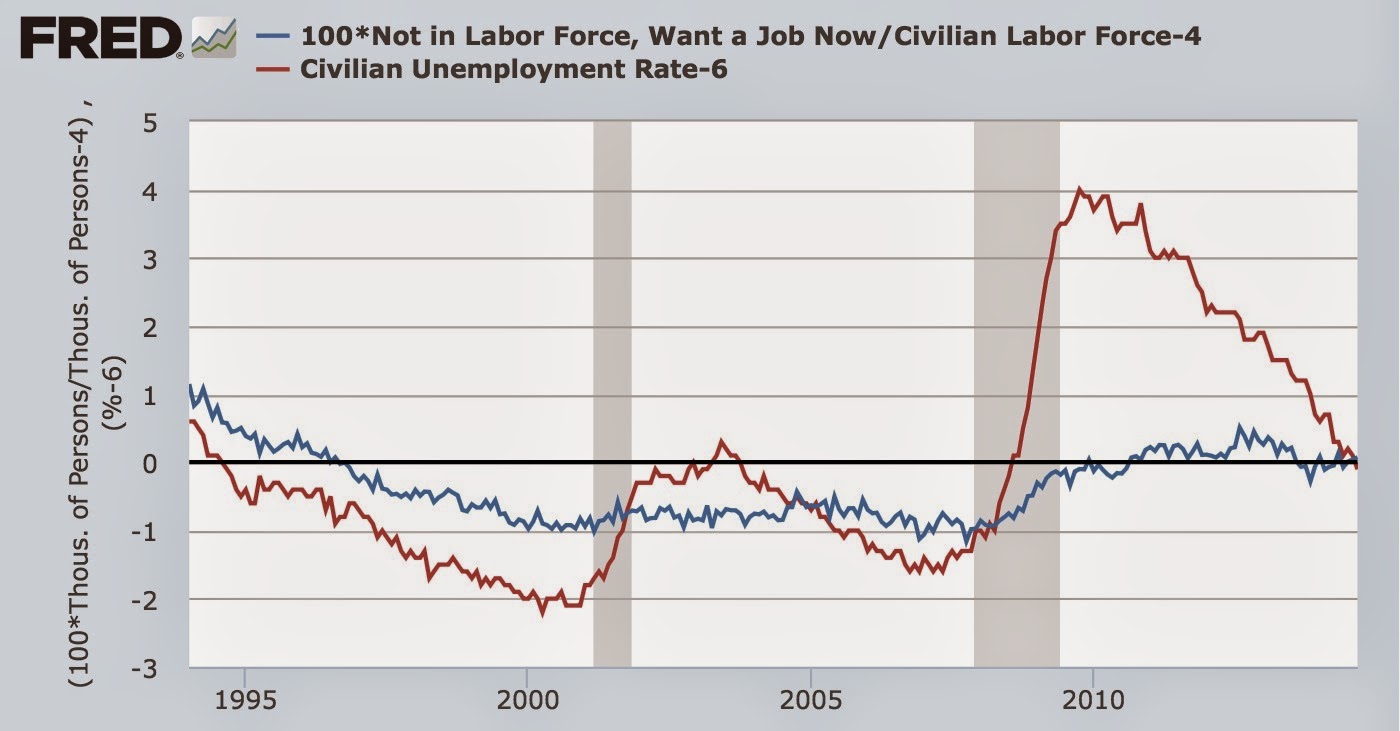 Note that while there are about 0.8% more who fit in this category now compared with 2003, the percentage of those who are so discouraged that they have left the labor force altogether is about 0.5% lower than it was in 1994.   In other words, there is no reason to think this is unusual at all, in an apples to apples comparison with other times of 6% unemployment.

In summary, there is no reason to think that the unemployment rate is underestimating labor slack compared with prior severe recessions, and in is likely only undercounting slack by about 0.5% compared with recoveries from milder recessions.