US Market Review For the Week of September 29-October 3

Although the uptrend is still in place for both the SPYs and QQQs, weakness in the IWMs, mid-caps and micro-caps is at minimum adding to downside pressure.  Changes in the international risk calculus (see here) are also adding to concerns.

From a fundamental perspective, there are few indicators pointing to anything but a continued moderate expansion in the U.S..  Let's start with the long leading indicators.  The worst of the four is building permits which have been moving sideways for about a year.  Corporate earnings dropped in the first quarter largely as a result of a very bad winter, but they rebounded in the 2Q.  M2 Y/Y growth is hovering around 5% and the inverted corporate yield curve is still in an uptrend.  The leading indicators have been in an uptrend for the last 6 months, and all concurrent indicators (industrial production, establishment jobs, income less transfer payments and real manufacturing and trade industry sales) are moving higher.  The total effect of these data points is one of continued growth for the US.

Also, consider last weeks ISM manufacturing and service sector reports, both of which were solidly positive, especially the anecdotal comments.

I asked NDD to add some comments about the market as well; here are his thoughts:

I rarely comment on the stock market from an investor point of view.  Normally I look at it from the point of view of a short leading indicator for the economy.

The selloff this week has been pretty tame - less than 5% of the value of the market.  And while there are a few divergences, I see only one issue qualifying as a genuine yellow flag.

The first divergence is the cumulative advance decline line.  I would expect a significant decline in the a/d line before I would expect to see a major market decline.  In prior recent selloffs, the a/d decline, like the market, moved to higher highs and higher lows.  This time it has established a lower low than the selloff in August: 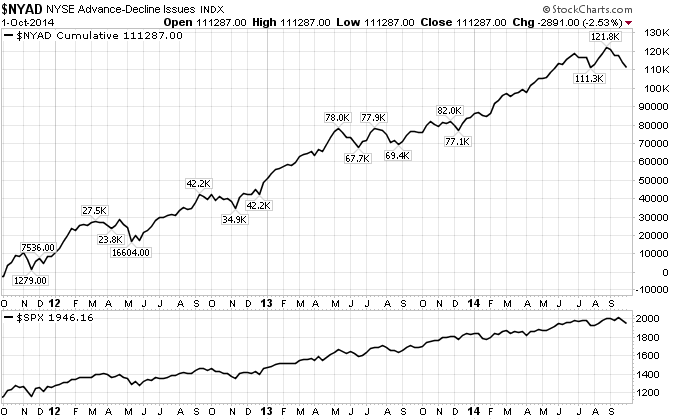 Still, it's not anything major at this point.

Next, consider bond yields compared with the S&P index.  Since 1998, bond yields and stock prices have typically moved in tandem.  Only when the economy has been strong, as in 2004-05, have yields moved sideways or lower when the market moved higher.  But that is what has happened for nearly all of this year: 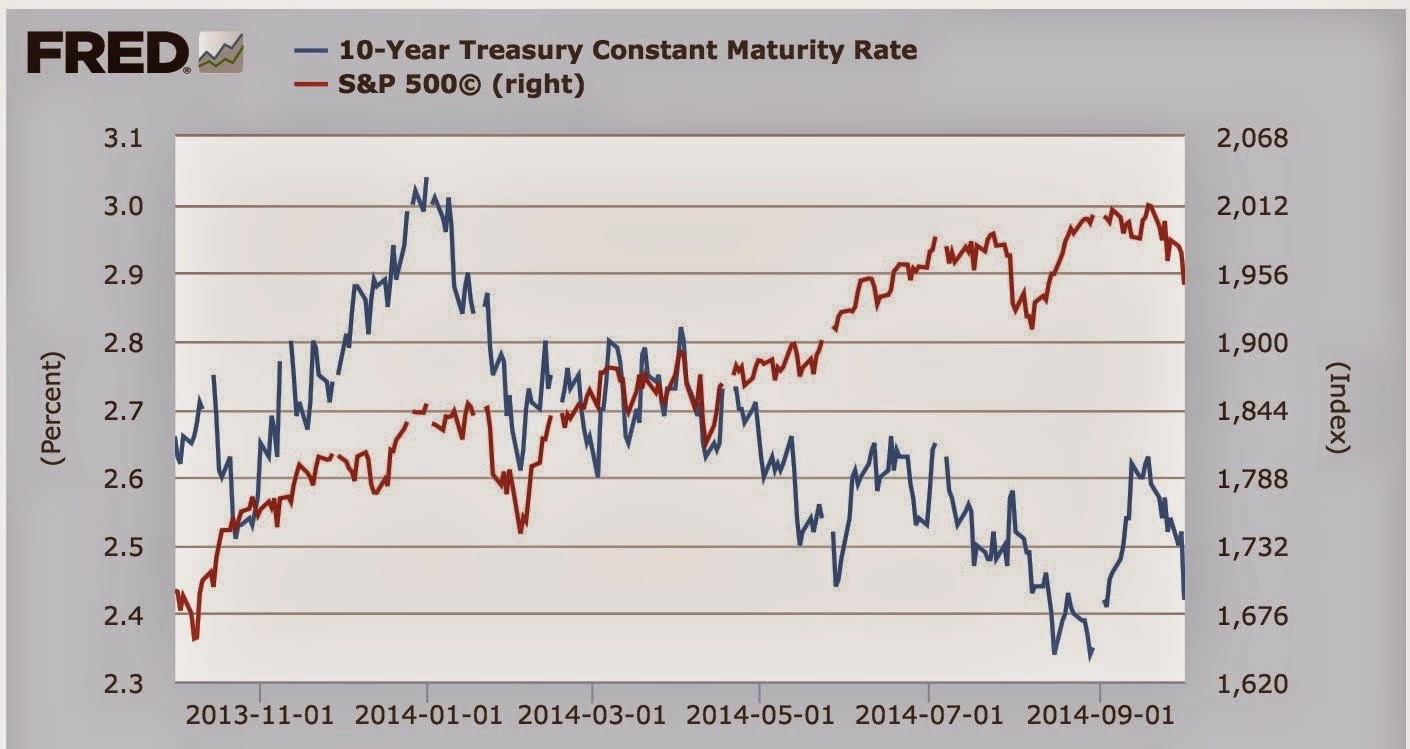 The S&P is up about 20% from a year ago, while yields have been generally declining since January. Only briefly during the August selloff, and again this week, have bonds demonstrated a"flight to safety" downturn in yields matching stock rice declines.

Again, a divergence, but hardly an established trend at this point.

Next, I am not seeing a big divergence between insiders and the public.  If I saw insiders selling hand over fist, coupled with a complacent public, I would be more concerned.  As you can see from this graph taken from last saturday's Barron's:

insiders really aren't hoisting a red flag  Again, at least not yet. 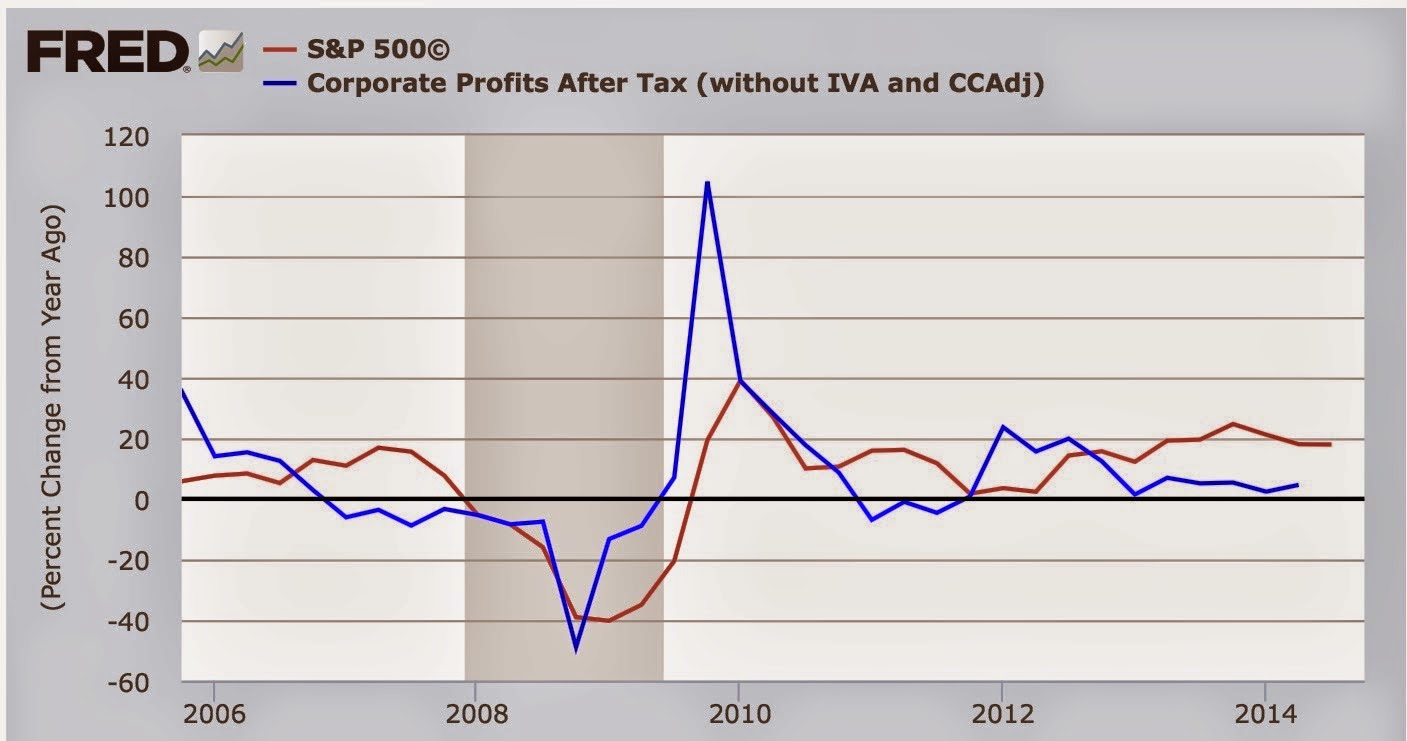 Typically stocks follow bonds with a lag of several quarters.

Only twice has that not been the case: in 2006-07 and this year.  Since corporate profits have only been up by about 5% YoY for the last 4 quarters, stocks should follow, but they haven't -- so far.

I fully expect stocks to revert to that mean.  Like 2006-07, there are signs that this might be a blowoff top.  But the same was true 3 and 6 months ago (remember the great margin scare of March 2014?). This last divergence is worthy of a yellow flag.  But that doesn't mean the correction is going to happen right now.

Now, let's start with the charts that are sending warning signals. 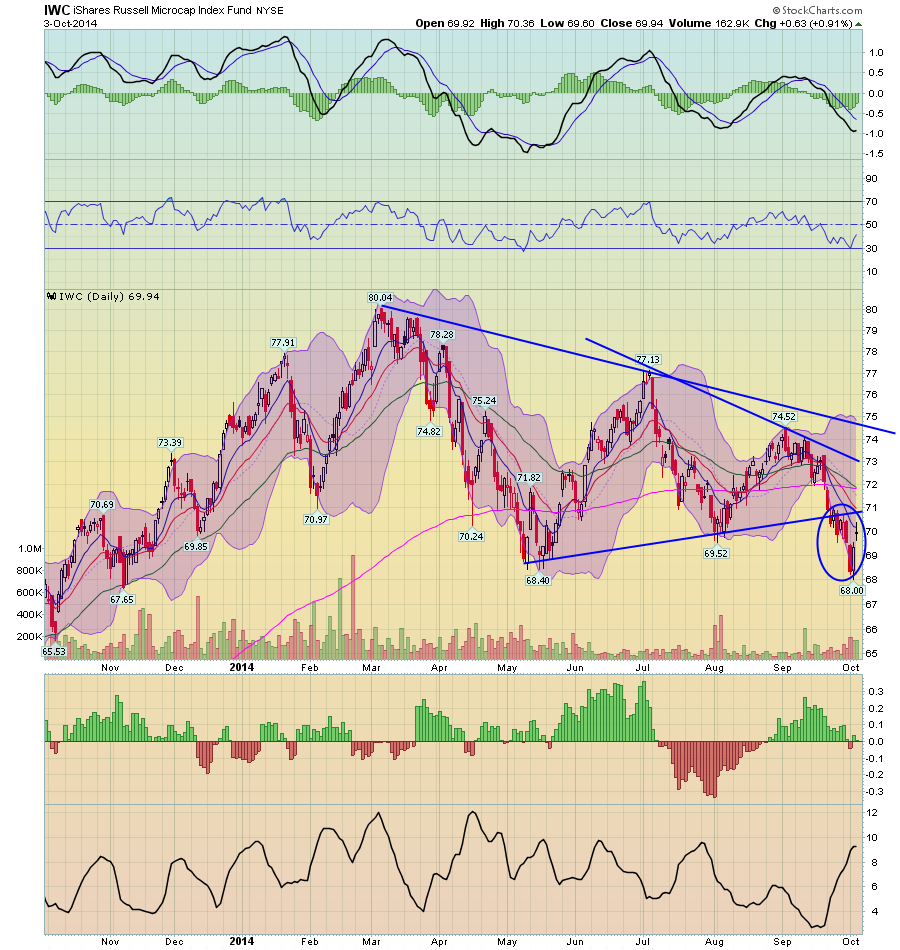 The micro caps were trading in a symmetrical triangle pattern for most of the last year.  Prices moved through the lower trend line a few weeks ago on higher volume and are now below the 200 day EMA; momentum is declining and volatility is increasing.  And, once prices broke through support, momentum to the downside increased as indicated by the longer candles. 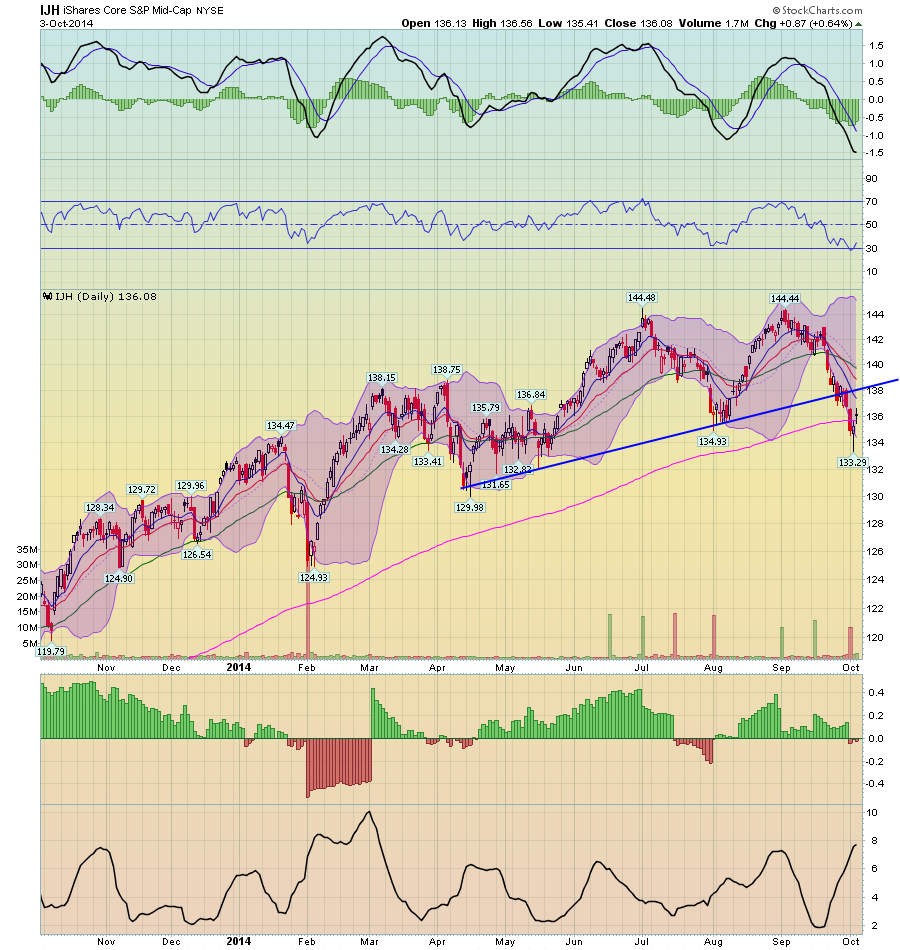 The mid-caps were still in a slight uptrend until this week.   But prices have moved through support.  They also dipped below the 200 day EMA before rebounding a bit on Thursday and Friday.  But the last two candles are weak and printed on declining momentum and a weakening price structure. 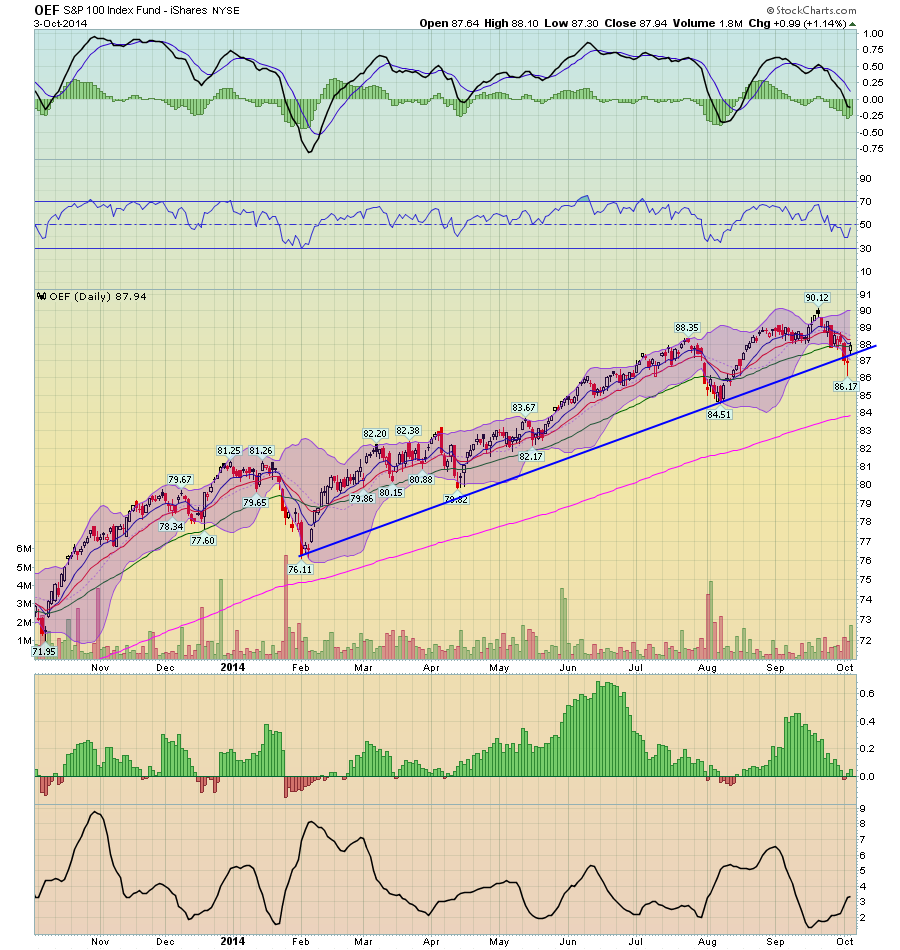 And the mega-caps (S&P 100) were not immune either, as they too briefly fell below their long-term trend line. 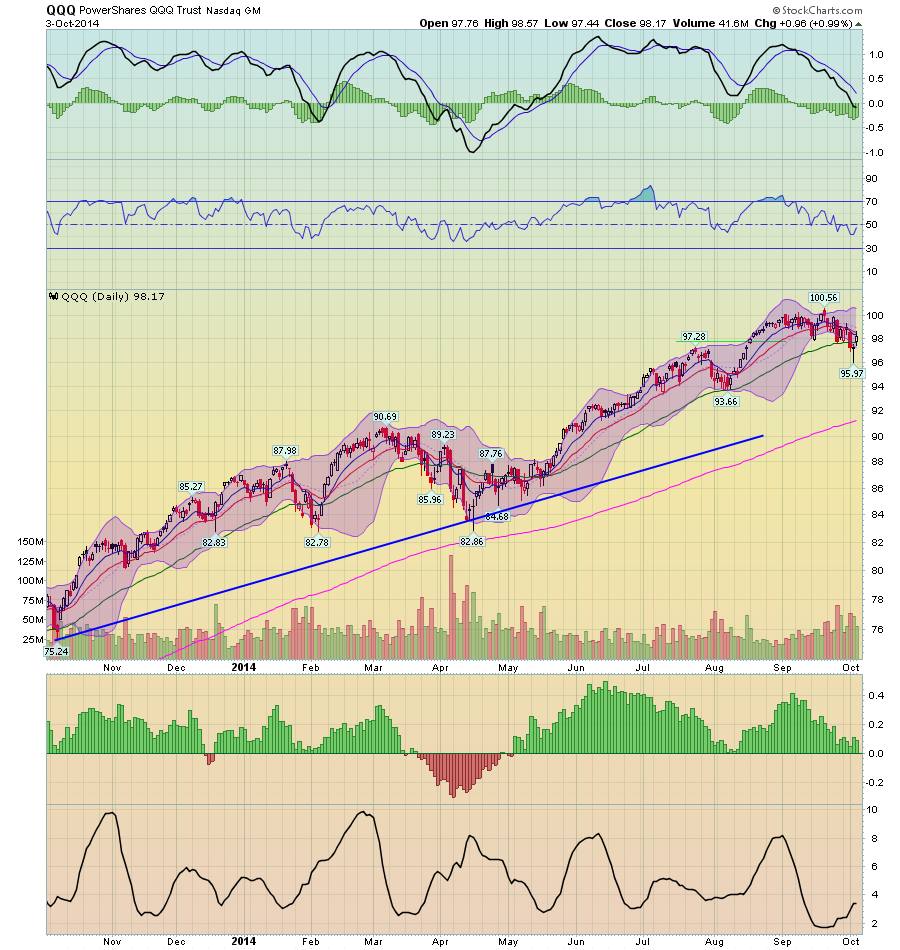 But on the plus side we have the NASDAQ which is still in very solid technical shape.  Prices are over 5% above the long term trend line.  While the underlying technical indicators are declining, prices would have to fall a fair amount before this average was in any way endangered.  And the fact it didn't drop sharply last week when other indexes were tells us traders are not so concerned as to sell their larger tech positions (at least not yet).

And, considering that the underlying backdrop is still at least moderately bullish, the number of stocks below their 200 day EMAs is at a bullish level: 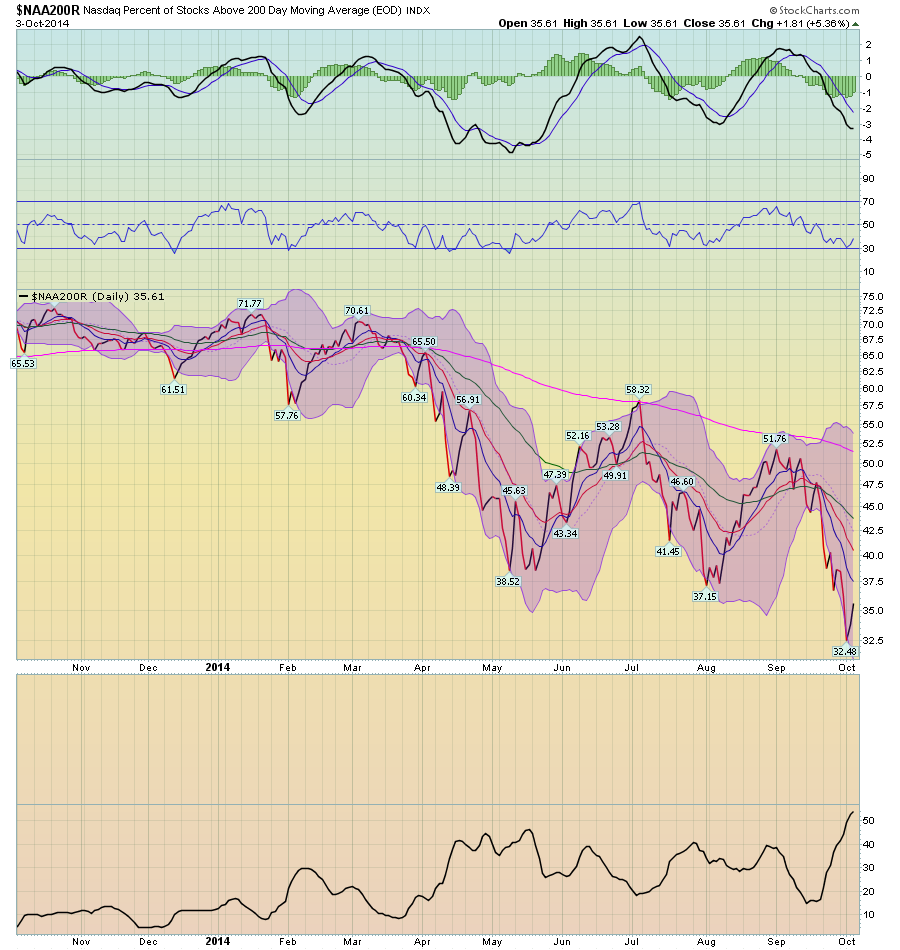 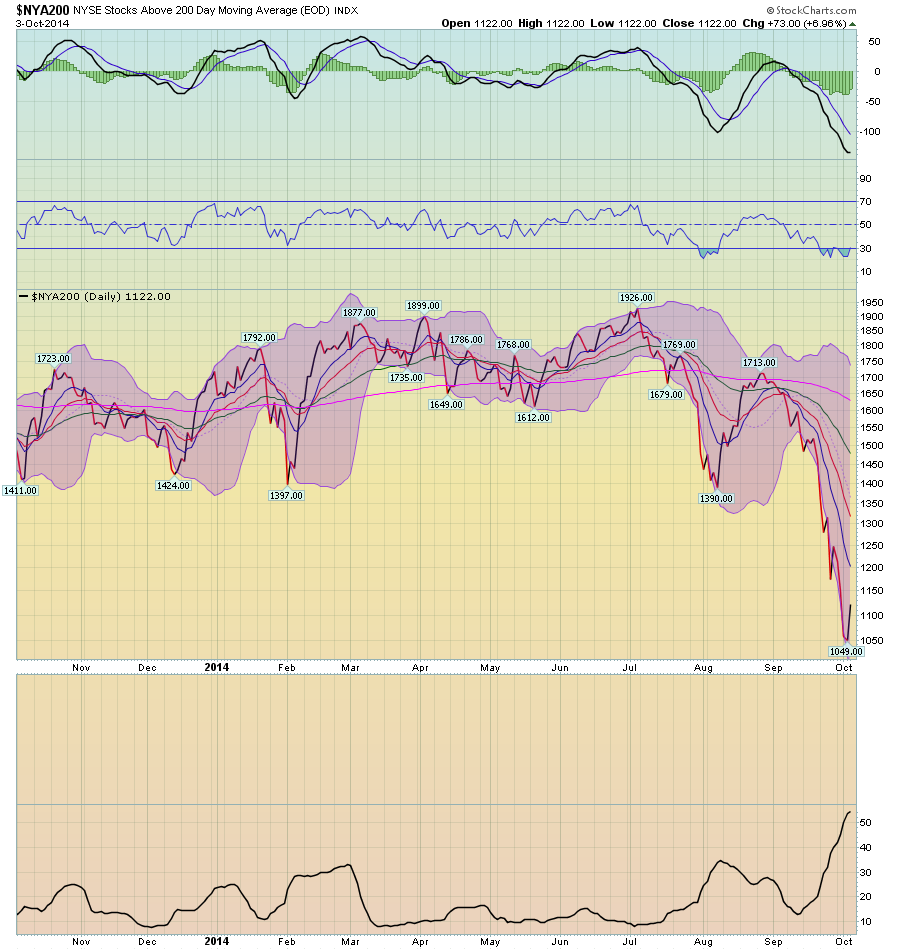 So, let's sum up the basic points from above.  First, the underlying US economic condition is still positive.  No series of economic indicator (long, leading and concurrent) is pointing to a contraction or even recession.  Last week's ISM numbers for both sectors of the economy (manufacturing and service) point to continued expansion.  There are concerns about several other economies, most notably the EU and Japan.  But the core of the US is still solid.  And given its size, it can continue to grow at a moderate pace while other world regions experience a slowdown.

There has been technical degradation of several sub-indexes.  This sell-off was triggered by international concerns and a re-calibration of traders risk calculus.  The charts indicate the sell-off is most likely to continue for at least the coming week, based on the weakening micro and mid-cap indexes.  But several other indicators (stocks below their 200 day EMA) indicate the market is approaching over-sold territory.  And when we place that data point against the fairly decent US economic environment, it's difficult to see the sell-off reaching panic proportions.