In case you're wondering, John Hinderaker was one of the many people who said the Fed's policies would lead to hyper inflation and spiking interest rates.  Bloomberg calculated the net investment returns a Hinderaker portfolio would have earned and came up with a net loss of $1 trillion.  Hence, from here on out, I will refer to Hinderaker as Mr. Trillion Dollar Loss of Mr. TDL for short.

Now we have Mr. TDL using Senate Republican slides to demonstrate how bad things are.  As you might guess, they are extremely misleading.

Let's start with this: 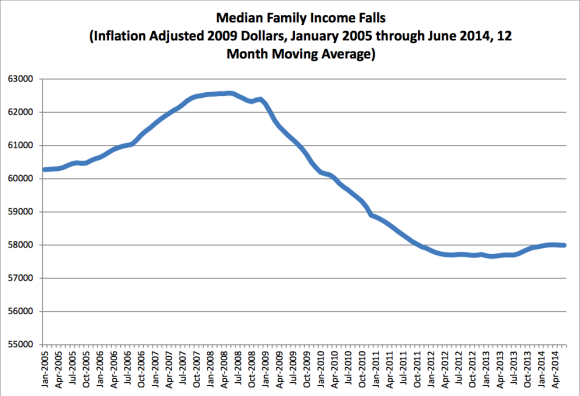 Notice very carefully the starting date for the graph: 2005.  Yet just a few weeks ago, Hinderker posted a more complete graphs of the same data: 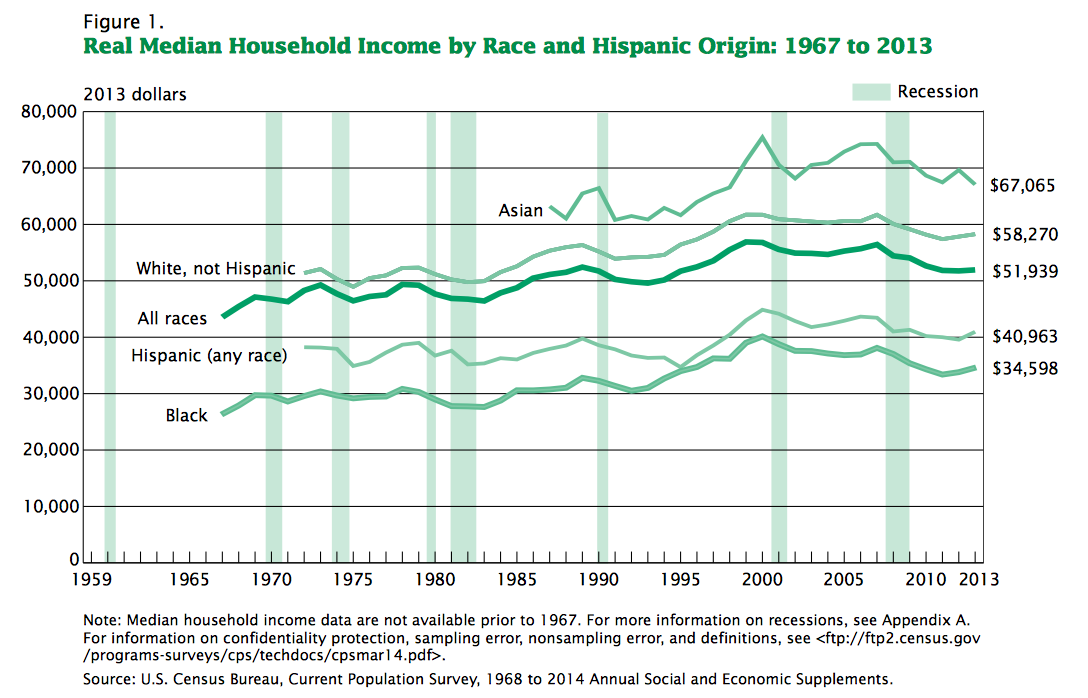 As I wrote at the time:

Except, of course, that isn't what the graph shows.  It shows the incomes rose in the 1980s and 1990s (Democrats and Republicans) and then moved sideways under Bush (who Hinderaker called a genius) and down under Obama.   In other words, it rose under a Republican and Democrat, stagnated under Bush and fell under Obama.  This is called chart reading, which Hinderaker obviously can't do.

Notice that Hinderaker's hero Bush also had a drop in median income.  Interesting that nothing was mentioned about that.

And then there is this: 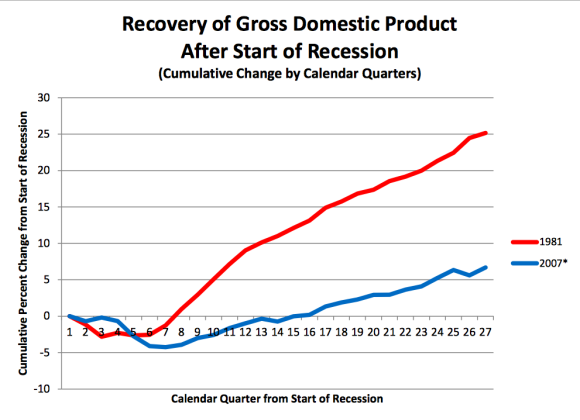 Obama is no Reagan!  Of course, this is also a misleading graph.  I'll let Barry Ritholtz explain why:

Consider an ordinary recession: The economy begins to heat up as wages rise and consumers borrow and spend. The Fed, concerned about increasing inflation, raises interest rates. As credit becomes more expensive, sales slow, putting the economy at risk of slipping into a recession.

But fear not! After six months or so, the Fed then lowers rates, unleashing all that pent-up demand. Consumers and businesses begin spending again, folks get hired and the entire virtuous cycle begins anew.

That approach is what we have seen in the 15 or so post-World War II recession-recovery cycles. An overheating economy leads to rising rates leads to a slowdown leads to falling rates. Rinse, lather, repeat.

That isn't what occurs after a credit crisis such as the Great Recession. Assets purchased with cheap and widely available credit become worth significantly less once the bubble bursts. But the debt remains. All of that leverage used to purchase all of those assets -- regardless of whether it's subprime mortgages or dot-com stocks -- sticks around.

Hence, a post-credit-crisis recovery is dominated not by the release of pent-up demand, but by massive corporate, household and government deleveraging. Even before the financial crisis, Reinhart and Rogoff were detailing how and why recoveries from such events were such slow, protracted and painful affairs.

It's an apples to oranges comparison.