For the first part in this series on EBay's balance sheet, please go to this link.

When looking at a large, established company's earnings and cash flow statements, the main thing I want is predictability and consistency.  While I don't expect the numbers to be completely uniform, lots of jumping around indicates the underlying economy is weak or that management may be having problems.  With that in mind, let's start by looking at Ebay's Margins: 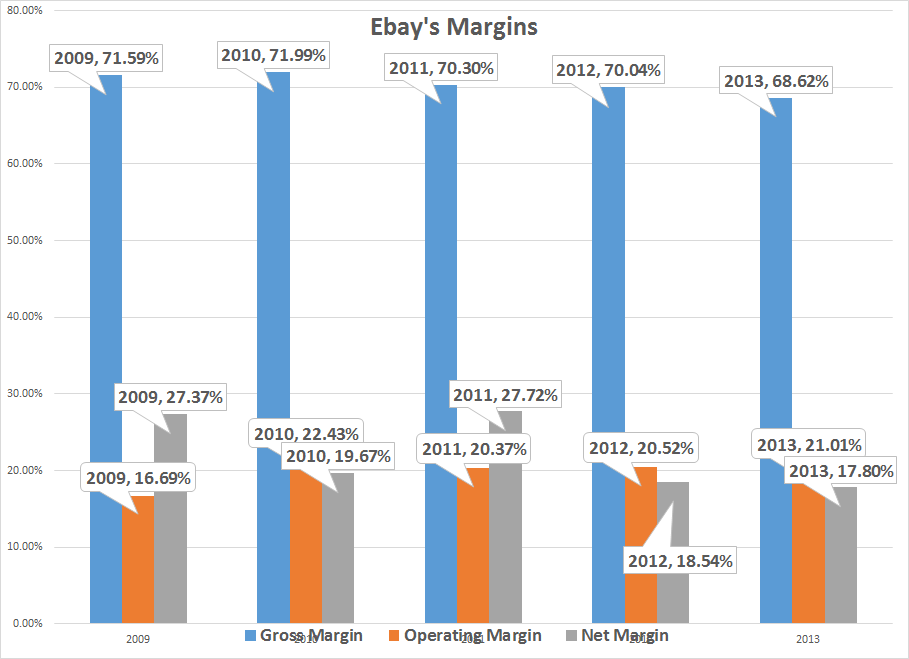 The decrease in the SGA expenses is encouraging, as it indicates costs are clearly under control.  That's always a good sign.  And the overall consistency in the revenue statement's margins also tells us management has a steady and disciplined hand.

Next, let's take a look at the company's overall revenue growth: Coming out of the recession, growth was slow at a bit under 5%.  2011 and 2012 had some strong growth (perhaps pent-up demand kicking in) while 2013's figure was a bit more subdued.  However, for a maturing company like Ebay, 14% is certainly nothing to sneeze at.  Given Ebay is a mature company, top line revenue growth in the 14%-20% is far more likely.

Let's turn to the cash flow statement, starting with the relationship between operating earnings and investment activities.  A mature company like Ebay should be able to derive investment funds from its operations, thereby freeing it on the financing side.

Here's a chart of the difference between operating cash flows and investment expenditures: 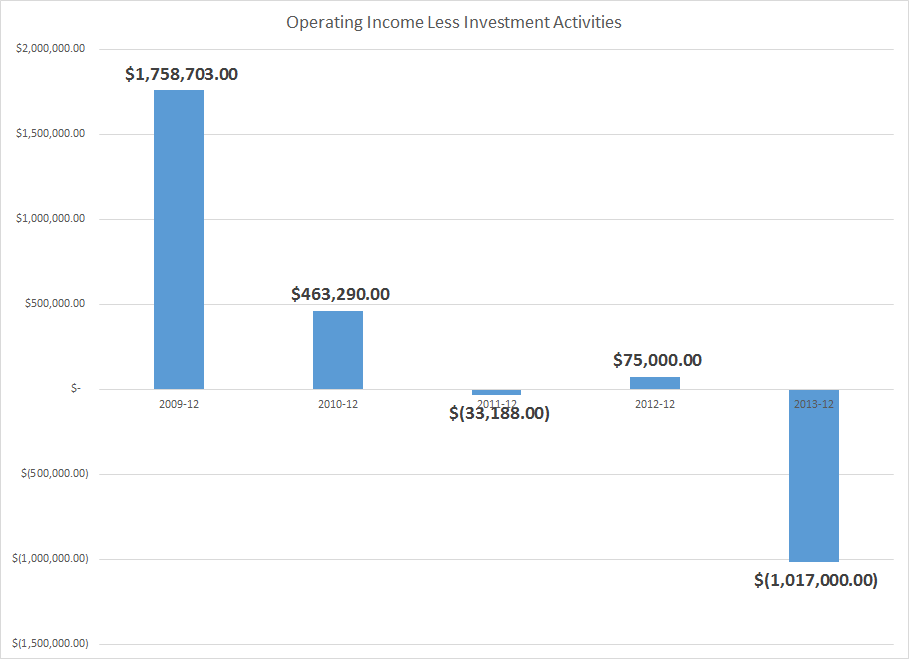 Ebay received a big cash infusing in 2009.  In that year, they had $2.9 billion in operating income but only $1.1 billion in investments.  Then they only had $567 million in PPE investments which was 19% of operating revenues.  It's also highly probably management invested minimally as the economy was just emerging form the recession and growth was low.  In 2010, there is still a net increase in cash, again with the most likely reason being conservatism on the part of management; their biggest investment expense was still PPE, but that total was only 26% of operating expenses.  In 2011 and 2012, Ebay ramped up PPE investments, which totaled $963.5 million and $1.257 billion, respectively.    The growth in their overall PPE expenditures is expressed in this chart: 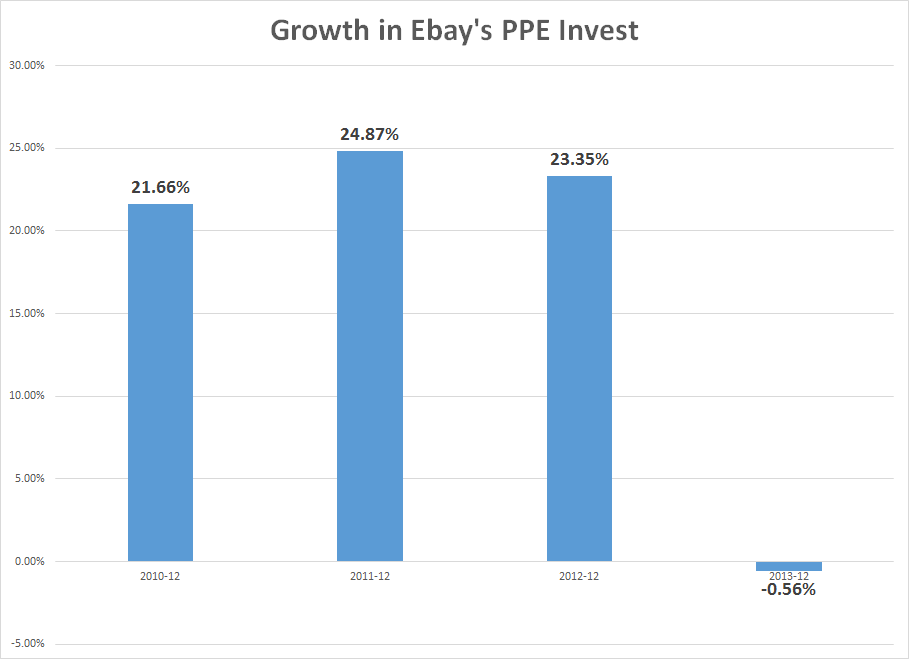 In addition to strong increases in PPE, Ebay has been adding to their overall investment portfolio at a strong pace on an annual basis: 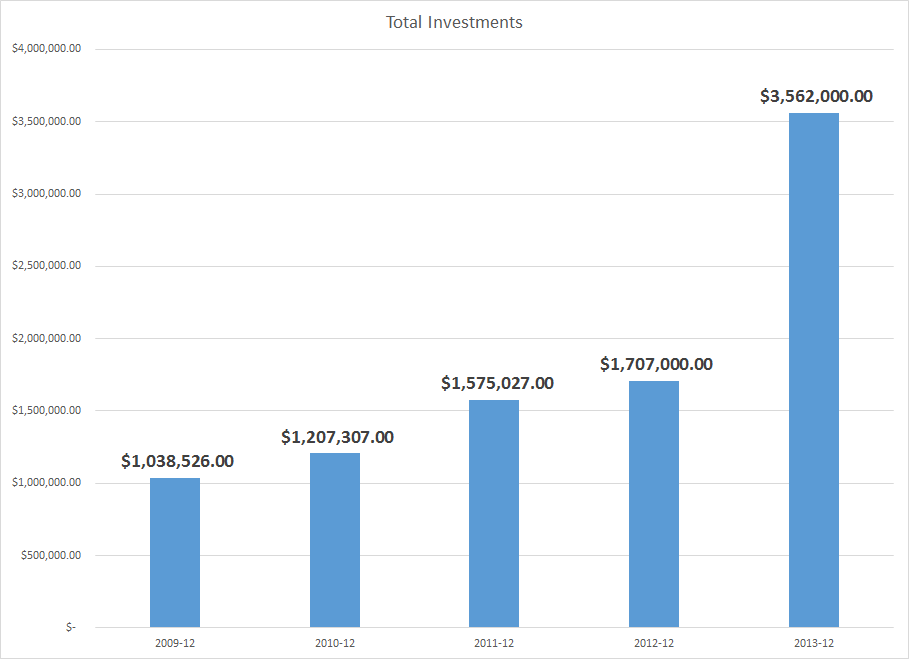 These investments have gone both to cash (in the form of short-term securities) and overall investments.

Finally, let's turn to the financing section of the cash flow statement.  It shows two points.

2.) Ebay has repurchased a little over $4 billion in stock.  Overall treasury stock has increased from $5.3 to $9.3 billion.

This leads to an interesting question: if and when Ebay will pay a dividend.  Consider EBay's retained earnings: 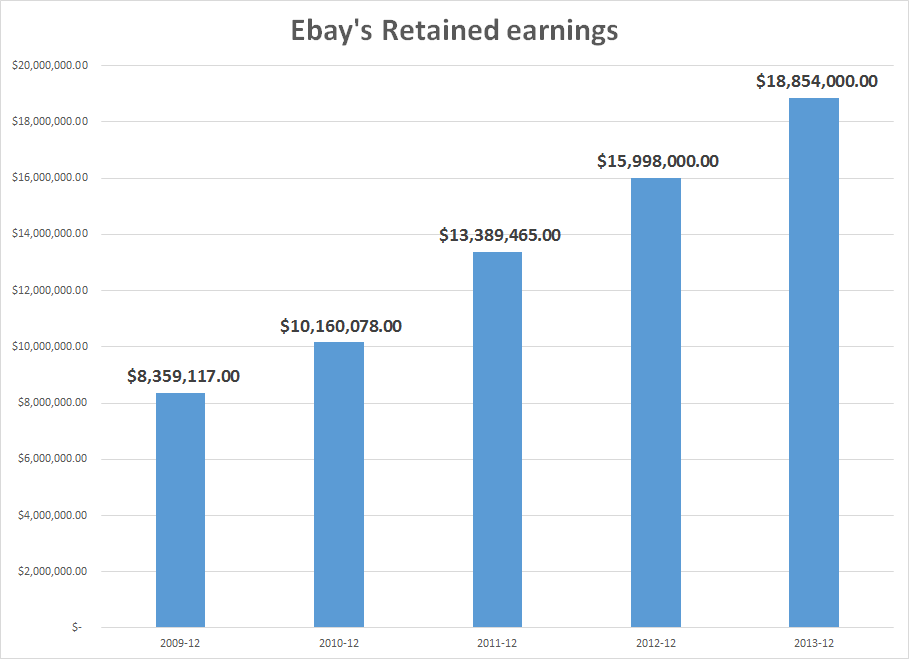 So, to conclude, EBay's management has costs under control as evidenced in the income statement.  Margins have been constant and growth has been steady.  I would expect a drop in annual growth rates to the high teens in the future.  The cash flow statement indicates the company has the ability generate a large percentage of its investment needs through ongoing sales, freeing the company up when it comes to structuring their financing.