A thought for Sunday: towards a leading index for wage growth

A nerd's work is never done.  I owe XE.com a column on margin debt from 3 months ago.  I owe Angry Bear a column on 401(k)'s that is still in its first draft stage.  I haven't finished comparing low vs. high wage job historical recoveries to see if this expansion has been different in quality, or just severity, in terms of the distribution of jobs creatted.  As I've mentioned before, if you knew how little time I really have after regular obligations, you'd be surprised I am able to post at all.  Despite that, I am going to add on a new challenge.

The two most important economic issues to average Americans are jobs and wages.

A lot of work has been done as to leading indicators for jobs.  For example, the Conference Board has an Employment Trends Index which it calculates from public data sources, and leads the jobs report by about 6 months (It's still rising, by the way).  Back in 2009, I wrote extensively about other economic indicators which telegraphed subsequent jobs growth (in particular real retail sales and the ISM manufacturing index), and used them to predict that jobs would hit bottom at the end of that year.  Depending on which data revision is current, I was either spot on or off by two months.  Since job are one of the four big coincident indicators, the Index of Leading Indicators itself is a decent first approximation of what will happen with job growth in the near future.

But almost no publicly available research appears to have been done to determine reliable leading indicators for nominal or real wage growth.  Most of the discussions about wages tend to be negative, as in, "when will wage growth require the Fed to raise interest rates?"  Even the one allegedly leading index I found, the "Bllomberg BNA wage trend indicator" (blue in the graph below), actually lags wage growth (red): 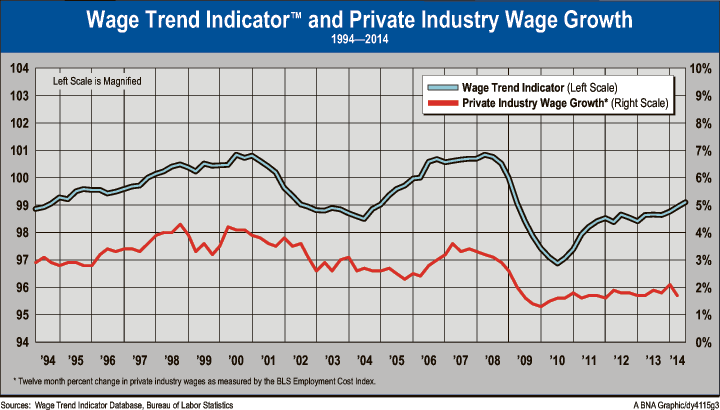 Secularly wages have been stagnant for almost 15 years.  In fact, wages now are below wages in the 1970s in real terms.  Cyclically real wages actually rose during the Great Recession due to the temporary collapse in gas prices.  With the rise in gas prices, real wages fell into 2012, and with the general sideways movement in gas prices since, real wages have very slowly risen.

It would be valuable to be able to confidently forecast the direction of real wages over the next 6 to 12 months.  Along with jobs, it is the big concern of most average Americans.  I've done some preliminary work, and found a few surprising correlations, enough to be able to at least make a back of the envelope forecast.  As time permits, I hope to lay this all out for you in the next month or so, and do a lot more research during the rest of this year to refine an approach towards establishing a leading index for wage growth.