The best measure yet of labor utilization?

I think I have found a better measure of labor utilization than Paul Krugman's employment to population ratio of people aged 25-54. It is also a measure which fully responds to the one notable weak point in today's employment repart.

ZH and a few Doomer dead-enders have touted the increase in involuntary part time jobs and the decline in full time jobs in the more volatile Household Survey.  There is an easy rejoinder to this, and that is to take a more granular look by examining the aggregate hours worked in the economy, which I've indexed to 100 at its December 2007 maximum in this graph: 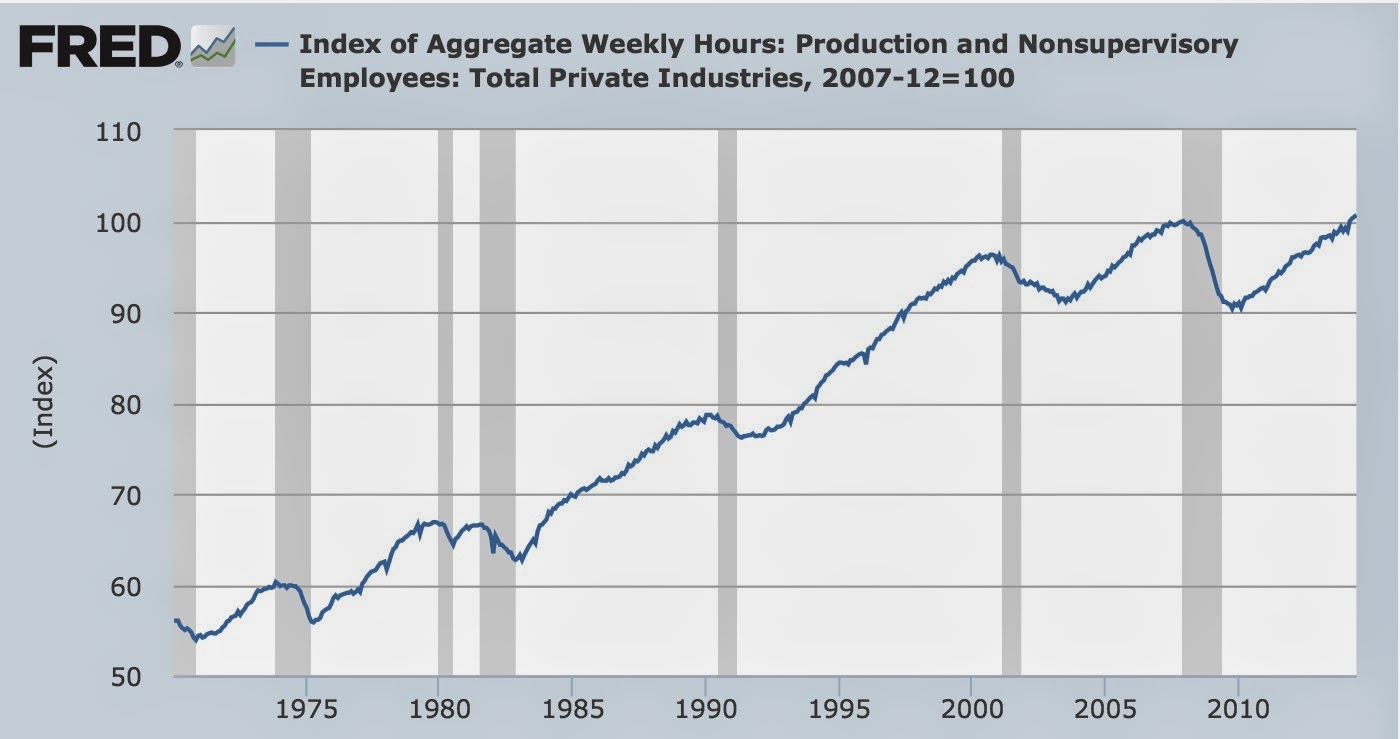 More hours were worked in the economy in June vs. May.  As usual, in the real world DOOM has failed to appear.

Now let's take out demographics (mainly Boomer retirements).  Here's the number of persons in the age group 15-64, normally thought to be the ages of employment: 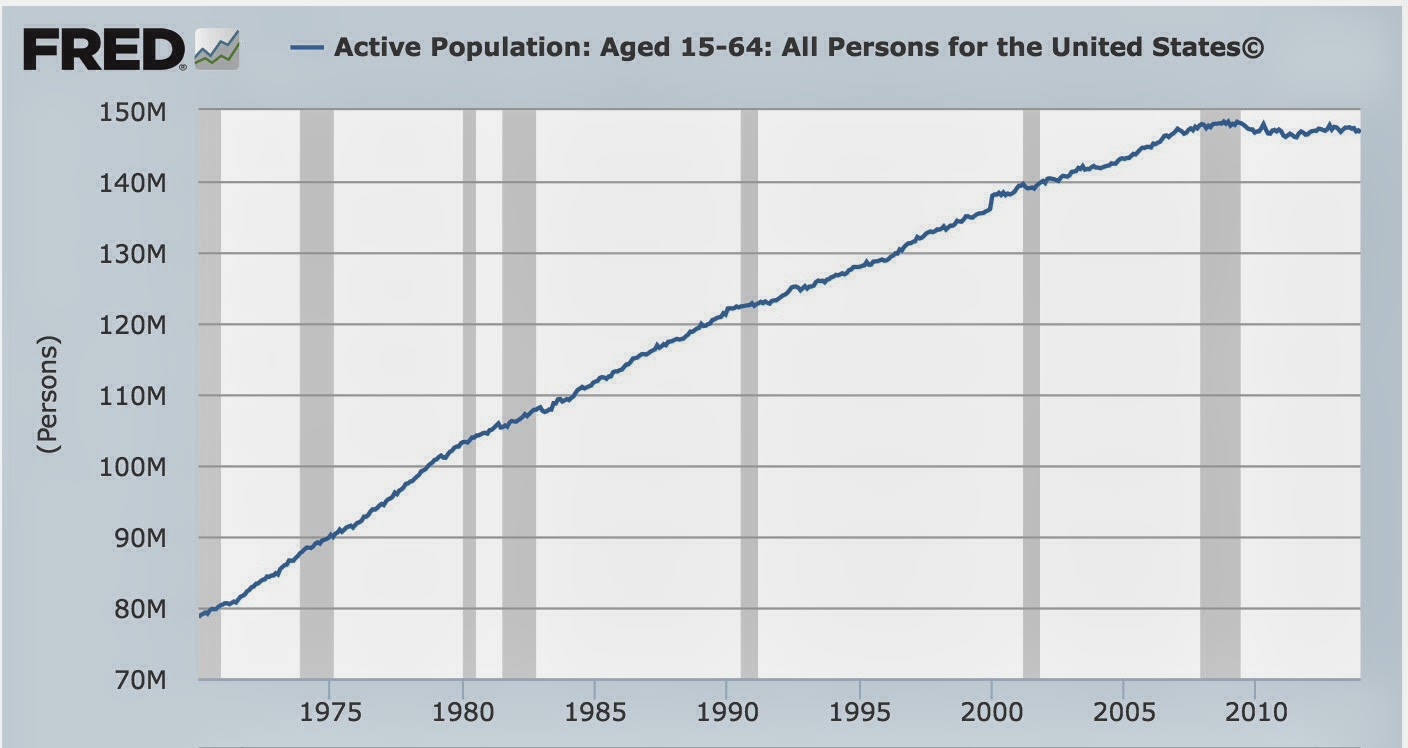 Now, we divide the aggregate hours in the economy by the working age demographic group: 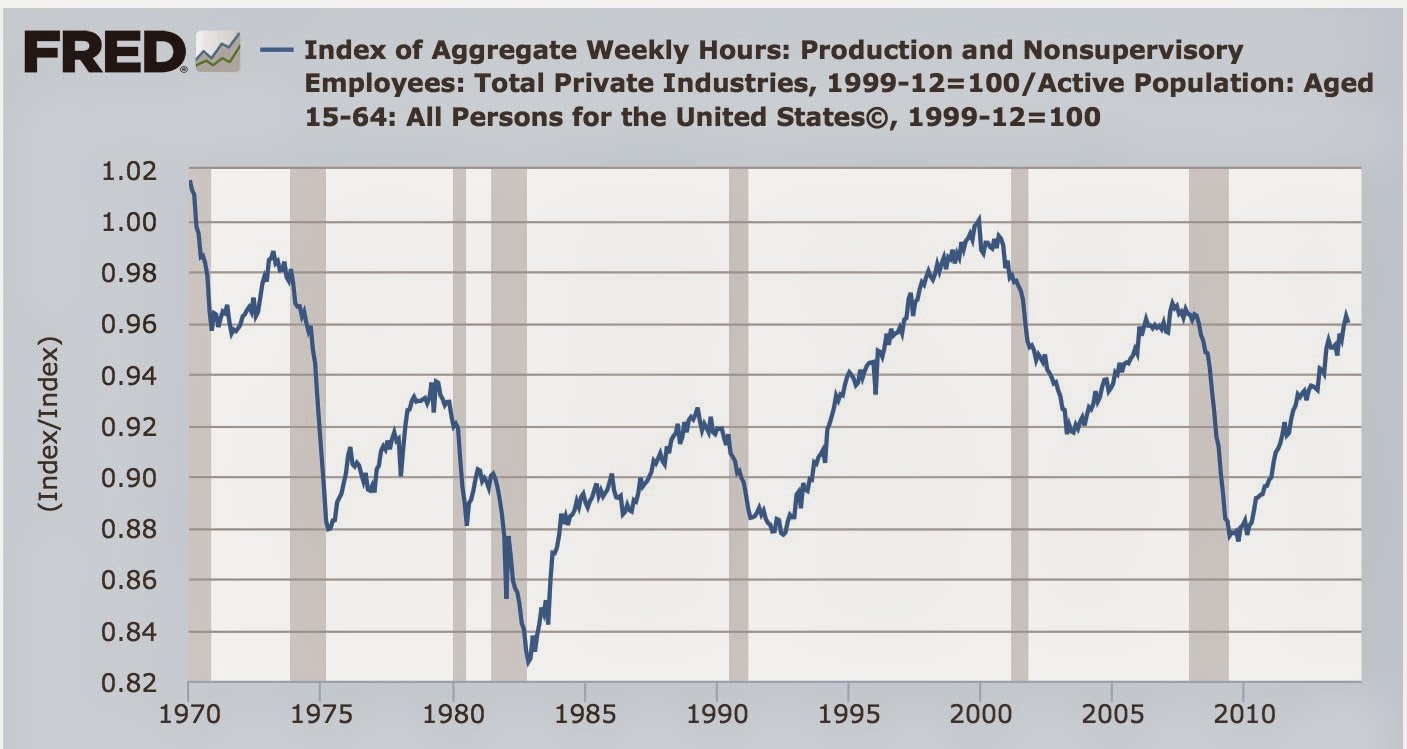 This tells us the number of working hours available in the economy to those in what is usually thought of as the working age demographic.  It clearly shows that the economy was at its best ever in the 1960s, and had its biggest boom in the last 40 years during the tech boom of the late 1990's.  It also shows that the worst times for labor were in the 1973-74, 1981-82, 1990, and the 2008-09 tecessions.

Interestingly, this shows just how significant an impact on the employment population there has been  by Boomers working past age 65, shown in this graph:

The number and percentage of people over 65 staying in the labor force force past age 65 has been increasing for 20 years, showing the effects of increasing healthy longevity.  This even affects Krugman's preferred metric of the employment to population ratio of those ages 25-54, because the longer Boomers stay in the work force, the fewer job openings there are for members of Gen X and the Millennials.

In short, since 1973, only the top of the tech boom, and 2007, were the only times in which the work available to the prime working age labor was higher than it is now.  If more Boomers can be enticed to really retire, the lot of the prime age working population will improve substantially.