Republican Minority Decides To Send US Into Recession

The federal government has shut down, largely as a result of a minority of Republicans bullying the Speaker of the House into a no compromise position.  While Boehner does have the votes in the House to pass a continuing resolution to fund the government, he would have to do so with a majority of Democratic votes.  Should he do this, the consensus among political analysts is he would lose the speakership (which is probably a correct assessment).

However, what has been completely lost among the Republican rump is that government spending is essential to the economy.  In addition, it has been essential for an incredibly long time and the low level of federal spending over the last few quarters has been a primary reason for slow economic growth in those quarters.

Let's start with the simple GDP equation: GDP=C+I+X+G.  Yes, the "G" stands for government spending.  Using basic math analysis (lost on the rump), if you remove one element from one side of the equation involving addition, you lower the value on the other side.

Now, let's look at historical data from the CBO. Below is a chart that shows the percentage of government spending relative to GDP: 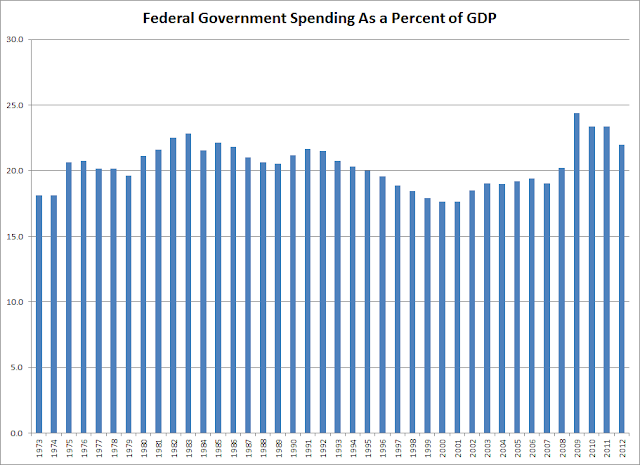 Federal government spending -- under both Democratic and Republican administrations -- has in general comprised about 20% of GDP.  And yes, the total did go up as a result of the worst recession in the last 70 years, but the percentage is in fact going down. 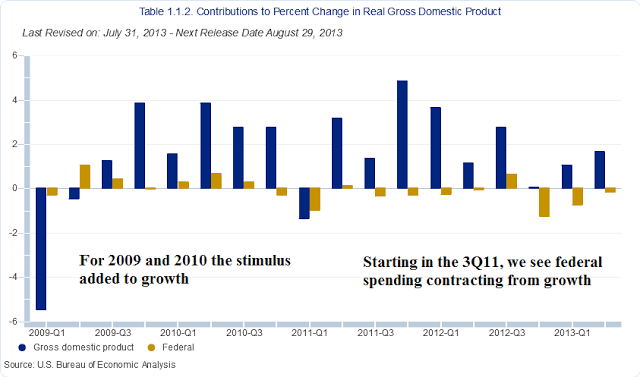 No economy can afford to have this much of an economic hit.  More importantly, an economy recovering from a financial crisis -- which will inherently lead to slow growth -- can afford a shut down even less.

There is only one conclusion: the Republican rump wants to cause a recession.