A thought for Sunday: an undemocratically elected minority of anarchists

An old cynical political saw says that, "in a democracy, people get the government they deserve." As it appears more and more likely not just that the government will shut down, but the United States will actually default on paying its debt obligations, it is worth recognizing that in this case, the old saw is wrong. In this case, a majority of voters cast their votes against the party that has vowed to shoot hostages if it does not get its way.

Simply put, we do not have a representative Congress. An extremist minority has erected barriers against actual majority representation. The elections of 2010 through 2012 have shown that electing a GOP majority at the state level is the last fair election that a state will have. This extremist party will redistrict - even in mid-decade - to ensure that it will retain control of the state legislature, and House Congressional districts representing that state, even if a solid majority of the population of that state votes against them in future elections.

That means that the Congress which is about to close down the federal government - which will cost billions of dollars by itself; the Congress which appears ready to default on payment of debts it already contracted for; is not a representative democratic body. It is a fundamentally unrepresentative body of a determined anti-democratic minority. It is and ought to be universally understoods as anathema.

Let's start with the Senate. According to the blog Matlab Geeks, a higher percentage of the US population has been represented by democratic Senators in all but two elections since 1980: 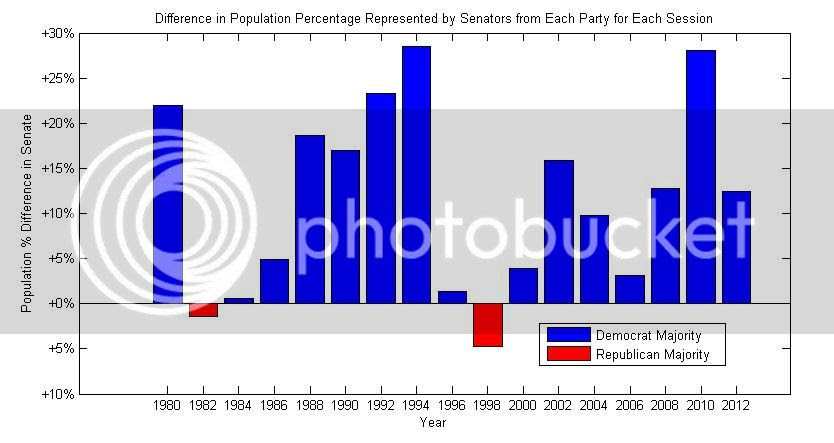 But because of the filibuster, that 55% consistently has its will thwarted. As set forth by Middle Class Political Economist:

Although the filibuster has become an inexcusable anti-democratic tool, at least it can be said that by design the Senate was erected as a federalist check on the direct popular will.

No such excuse can be made as to the House of Representatives.

Because of gerrymandering, the House also has become perversely unrepresentative of the US population. The democratic party in this Congress has 35 fewer seats than the GOP, even though the democratic party won an outright national majority of the the House vote. Here's how unrepresentative the House vote in 2012 was, as shown in a graph prepared by Princeton Neuroscience Professor Sam Wang: 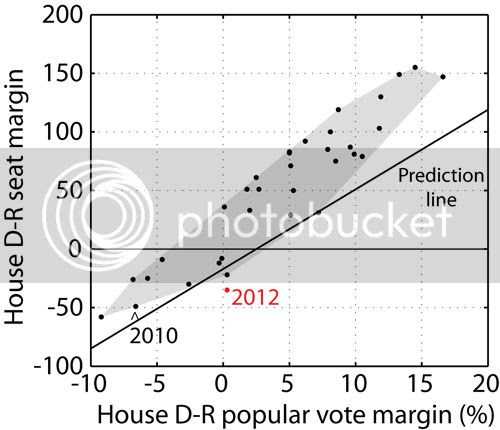 Just how undemocratic is the representation in the House of Representatives? Based on his calculations, Wang concluded:

Based on how far the red data point is from the black prediction line, the “structural unfairness” may be higher – as much as 5% of the popular vote. That is incredible. Clearly nonpartisan redistricting reform would be in our democracy’s best interests.

So it cannot be said in any fair sense that the Congressional hostage-takers are at least representing the will of the people. They are not. In the Legislative Branch of government, the US is no longer a representative democracy. It is under the control of an unrepresentative, undemocratically elected minority of willful extremists. That is why the US is on the brink of a fiscal crisis.
Posted by New Deal democrat at 7:01:00 AM