Last week, we received a broad swath of information on the US economy, starting with the third and final GDP statement for 2Q13.  According to the BEA:

Real gross domestic product -- the output of goods and services produced by labor and property located in the United States -- increased at an annual rate of 2.5 percent in the second quarter of 2013 (that is, from the first quarter to the second quarter), according to the "third" estimate released by the Bureau of Economic Analysis. In the first quarter, real GDP increased 1.1 percent.
.....
The increase in real GDP in the second quarter primarily reflected positive contributions from personal consumption expenditures (PCE), exports, nonresidential fixed investment, private inventory investment, and residential fixed investment that were partly offset by a negative contribution from federal government spending. Imports, which are a subtraction in the calculation of GDP, increased.

There was a relatively broad amount of improving data -- PCEs, business investment and exports all contributed to the increase.  As has been typical of the last four quarters, federal government spending contractions were responsible for the negative contributions.  Overall, it was a fair report with the primary problem being the lack of +3% top line growth.

We also learned that personal income increased as well:

Real DPI has increased at modest rates over the last few months, another encouraging sign.

The Chicago Fed National Activity Index (FCNAI) "increased" from -.18 to -.14, indicating the US economy is expanding below its potential.  The index has been printing negative numbers for the last six months.

We had four manufacturing related numbers come out last week.  First, Markit's US number printed at 52.8, down from 53.1.  While output and new orders were both positive, new export orders came in below a reading of 50,  indicating a contraction.  This is only one month of data however, meaning we should keep an eye on it for the time being.  The Richmond Fed's manufacturing index dropped to 0, while the internal readings for new orders and production also fell sharply.  The Kansas City Fed manufacturing survey came in at 2, which compares to readings of 8 for August and 6 for July.  Finally, new orders for durable goods increased .1% last month.  Looking at the number ex-transports, we see increases of .1, -.5 and -.1 for the last three months, which indicate some weakness.

We also had two data points from the housing market.  First, the Census Bureau reported that:

Conclusion: at the macro level, the US economy is still growing and generating income growth, although at weak levels.  However, these levels are consistent with numbers we've been seeing for the duration of this recovery.  Manufacturing is still expanding, although some of the numbers from the regional surveys indicate some short-term weakness.  Housing continues to improve and, most importantly, consumers seem to be getting used to the higher interest rates on loans.

Let's turn our attention to the markets: 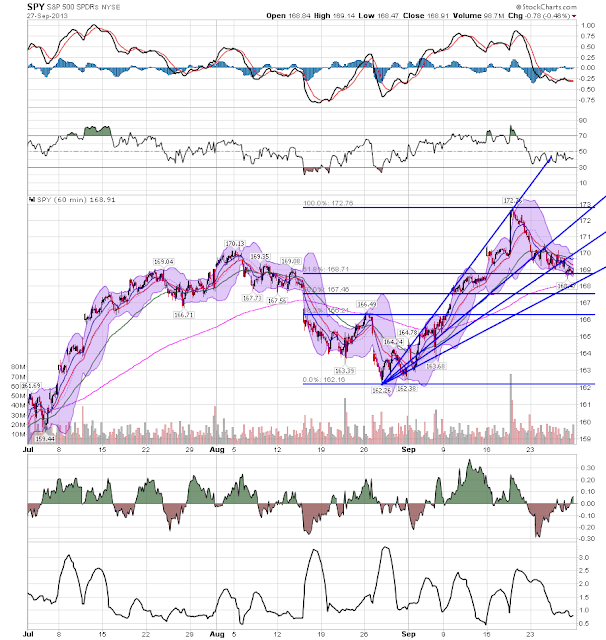 The 60 minute SPY chart shows that last week's price action was simply a sell-off from the rally that lasted from the end of August through mid-September.  Momentum is weak and there isn't much volume flow into the market. 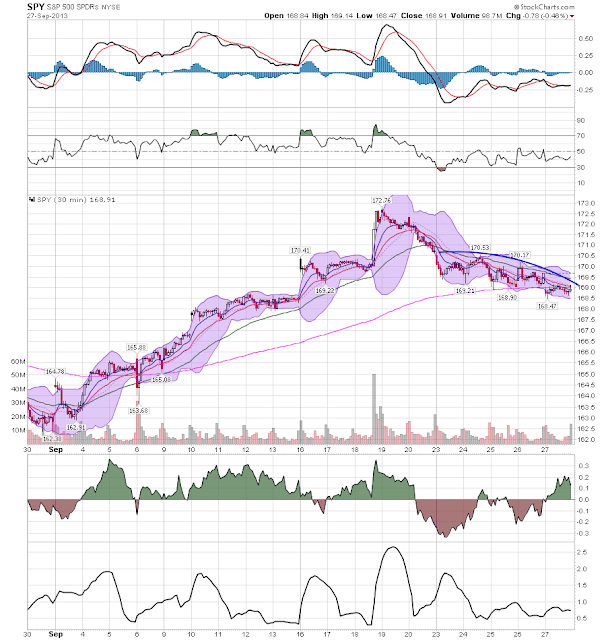 The 30 minute chart shows the heavy technical damage was done at the end of the week of September 10-23; last week's price action was really more of a gentle move lower. 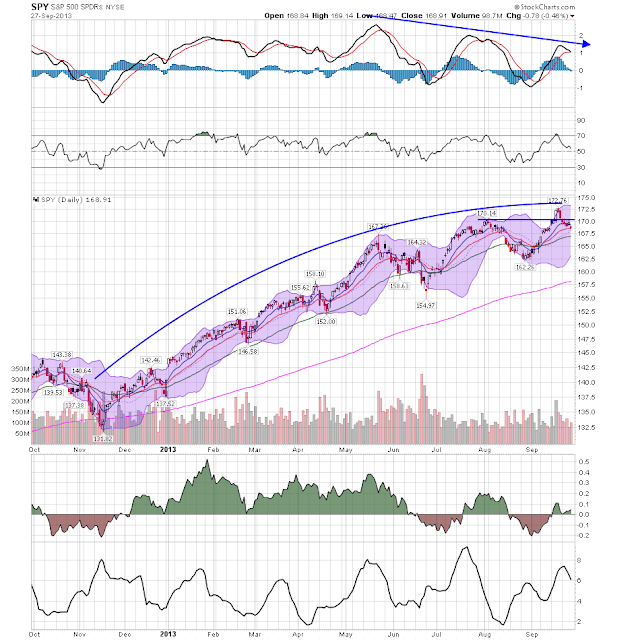 Remember that on the daily chart, we have two somewhat bearish trends in play.  The first is a weakening of momentum; note the decrease in the MACD's highs over the last 3-4 months.  Second, the price arc is moving a bit more sideways now rather than printing an increase. 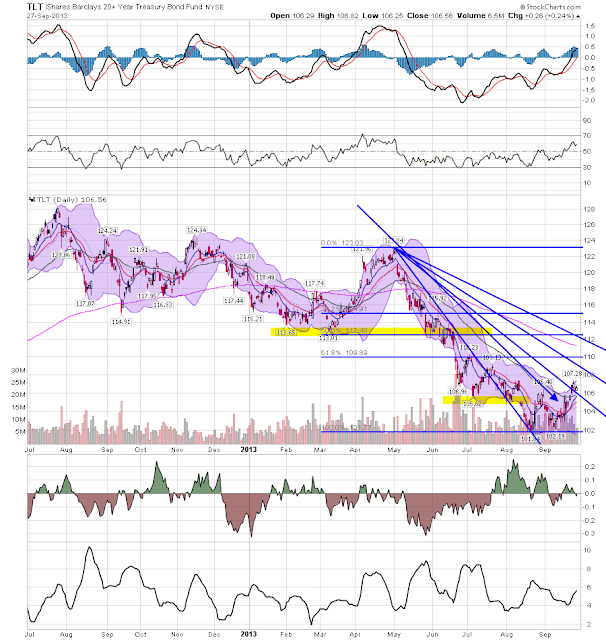 There are two technical events occurring in the long end of the treasury market.  The first was the sell-off caused by the Fed's taper announcement.  Here we see prices drop from 123 to 101 (a drop of about 18%) which included a move through the technically important 113 and 105-106 level.  Since then prices have "rallied" and are looking for a natural upside resistance point.  But remember that this is a technical bounce, nothing more.