Is France Turning the Corner?

For the first part of the this year I was bearish on France (see here).  But over the last few months we've seen the economic numbers move from contraction to expansion (see here ).  The recent GDP print is another reason for guarded optimism.

Let's take a look inside the numbers: 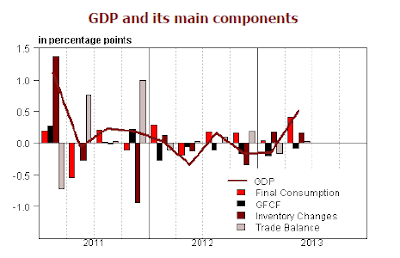 This chart shows the percentage chance in GDP and the contributions from various GDP components.  First note that overall top-line growth (the red line) has been printing around 0 since the 2H11; last quarters .5% print was the best reading we've seen in over a year and a half. 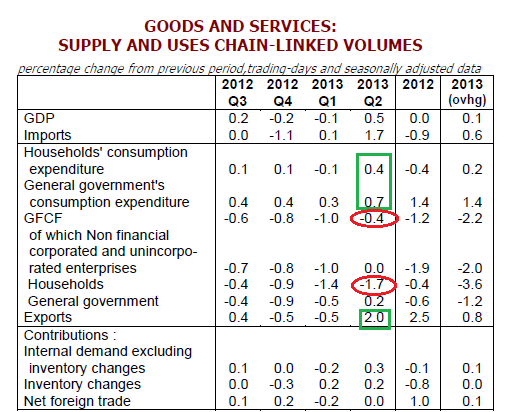 The table above shows the percentage contributions from various GDP components; I've placed the positive contribution in green and the negative in red.  Notice the decent bump in consumer increases (up .4%) and government purchases (up .7%).   However, the biggest and most surprising figure is the exports number which increased 2%.  This shows that other economies are also growing.  In contrast, notice the household investment subtracted 1.7% from overall growth last quarter.

At this point, the standard economic caveat should be stated: this is one quarter of data, and France has had a very difficult road over the last few years, so we need to see several quarters of additional data before arriving at a firm conclusion.  However, this month's data is encouraging.