Following our non-standard monetary policy measures and action by other policy-makers, a broadly based strengthening in the deposit base of MFIs* in a number of stressed countries was observed. This allowed several MFIs to reduce further their reliance on Eurosystem funding and helped to reduce segmentation in financial markets. M3 growth was also supported by an inflow of capital into the euro area, as reflected in the strong increase in the net external asset position of MFIs.

Draghi'a primary assumption in the above statement is that when banks rely on the central bank for the primary source of their overall funding there is an inherent problem in the system.  The reason is that depositors have withdrawn their money from the banks and placed these funds elsewhere, which indicates a deteriorating confidence in the financial sector.  Conversely, when depositors begin placing their deposits back in banks it indicates more confidence in the financial system and, hence, a better underlying situation.

With that in mind, consider the following chart from the latest monthly ECB bulletin: 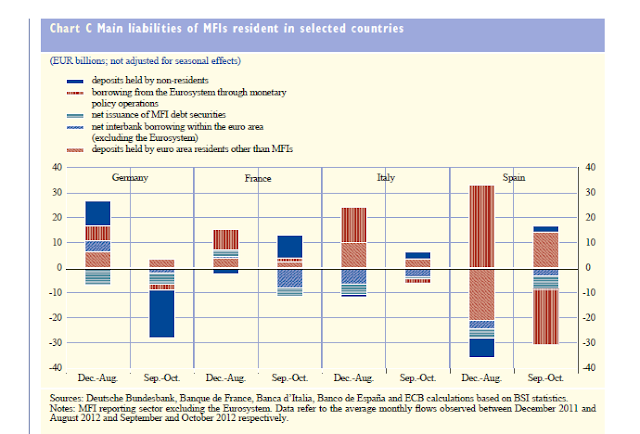 As the report notes:

The improvement in banks’ funding situation is also reflected in positive flows for domestic and non-resident deposits in France, Italy and Spain (see Chart C). Meanwhile, German banks have seen a decline in deposits held by non-residents, suggesting some moderate rebalancing of portfolios by international investors. Consequently, German banks reduced their claims on the Eurosystem in September and October, while banks in other countries (especially Spain) have
reduced their borrowing from the Eurosystem. The results of the October 2012 bank lending survey also show that banks’ access to retail funding improved in the third quarter of 2012.1 Overall, these developments suggest that the degree of financial fragmentation in the euro area may be declining. That can also be seen in the stabilisation of TARGET2 balances since mid-2012.

At the same time, the improvement in funding -- and low cost of capital -- is not being transmitted to the private sector: 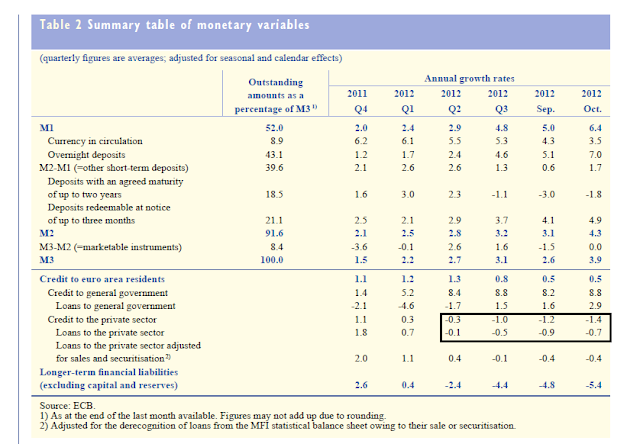 Notice the negative credit growth in the system for both the second and third quarter of 2012.