2013 forecast: housing and refinancing vs. Oil and austerity, part 2

In the first part of my 2013 forecast, I said that the short leading indicators point to the economy shambling along and just avoiding recession in the first half of 2013, but that the monkey wrench of the 2% payroll tax hike just enacted is likely to tip that into contraction unless a new refinancing opportunity via even lower interest rates bails out consumers again.

The second half of 2013 shuold feature renewed, or stronger, growth

Fortunately, these are almost all in agreement in suggesting improved growth. It may be growth from a new bottom due to contractionary fiscal policy, but if Washington can manage to keep its hands off the economy by not enacting any more austerity measures (yeah, I know, and pigs can fly), it should be renewed growth nevertheless. 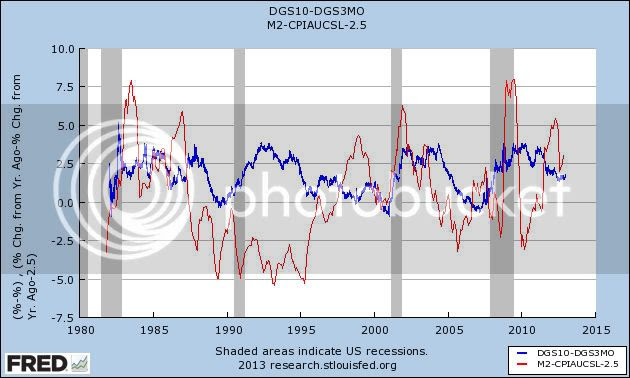 As I said at the beginning of this forecast, unless we expect actual deflatioin, a positive yield curve and postive Real M2 of greater than +2.5% reliably signal economic expansion 12 months later. Although low wage growth is a real longer-term concern, the only thing that I can foresee that would lead to actual deflation in 2013 is if there were to be a 2008-style gas price spike, say, to $5 or more. Since that doesn't look very likely, actual deflation is not likely, and the K.I.S.S. signal of a positive yield curve and positive M2 suggest that the economy continues to grow throughout 2013.

While Prof. Moore did not use the yield curve as a component of his long leading index, he did make use of Real M2. Let's look at the other components. Here are housing permits: 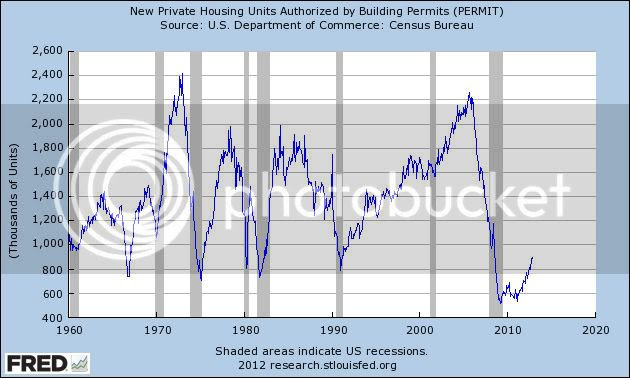 Permits have risen sharply from their bottom over the last nearly 2 years. We've never had a recession with permits rising like this. 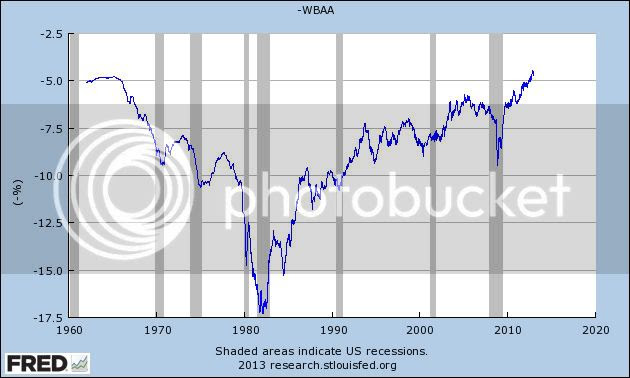 Next, here are corporate profits after taxes (log scale). These have also continued to rise as of the latest data, from the 3rd quarter of 2012: 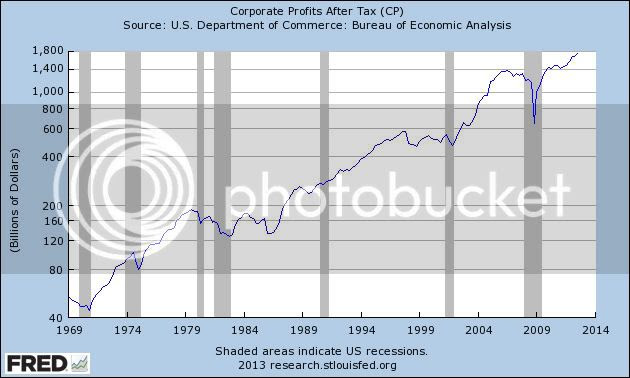 In summary, all of Professor Moore's long leading indicators have been improving throughout 2012, suggesting continued growth throughout 2013.

Finally, let's look at a long leading indicator I found several years ago -- the real personal savings rate. This is a proxy for how comfortable consumers feel spending money. When it declines more than 5%, that is an indicator that consumers are more fearful and feel the need to save more, and has frequently been a harbinger of recession about a year or so later. The end of the recession has generally been signaled by a rise of 2.5% in the real savings rate, as consumers loosen the purse strings somewhat. Here the indicator is more ambiguous: 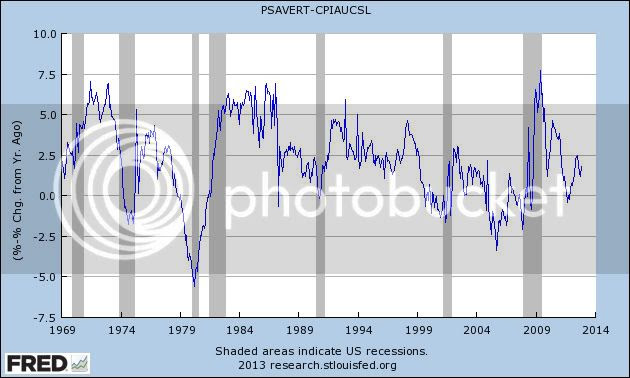 This indicator did indeed decline by more than 5% between 2010 and the end of 2011, but only briefly, and rose more than 2.5% during 2012, before declinng slightly again. If anything, it suggests a mild contraction right about now followed by improvement.

Taken together, the long leading indicators all appear to suggest more growth in 2013, especially as the year progresses.

In conclusion, this first year of a presidential term, like other such years, looks most vulnerable to at least a technical recession. Increasing gas prices, an apparent seasonal distortion in the statistics since 2008, and the immediate loss of 2.0% of disposable income due to the payroll tax increase make spring of this year especially likely to see actual contraction.

But the resurgeance of the housing market, and the continuing accomodation in interest rates and moentary policy, look like they will come to the rescue again later in the year, provided Washington can avoid burdening the consumer with further austerity measures taking effect this year.
Posted by New Deal democrat at 9:00:00 AM