While most of Europe has been hit by the slowdown, Germany for the most part appears to have weathered the storm pretty well.  Until the last month, that is.  Recent statistics indicate the European stalwart is being bit by a slowdown. 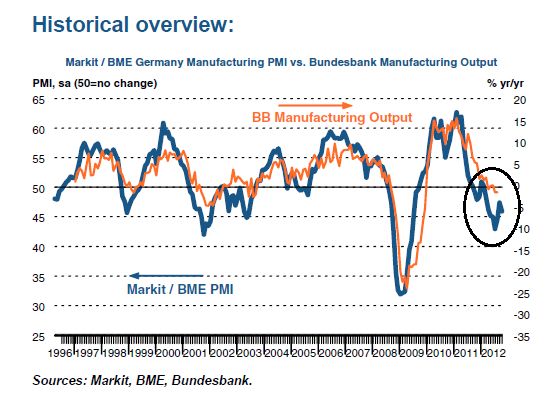 The manufacturing PMI issued by Markit has been in contraction for most of 2020.  And while this number rebounded a bit over the year, the recent readings have been lower.  New orders are down, and new export orders dropped sharply.  Backorder work also decreased, indicating manufacturers may start running out of things to do, leading to layoffs. 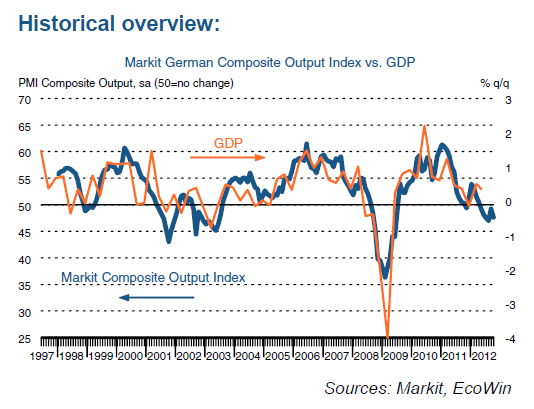 And now, the services sector is following the manufacturing sector into contraction territory.   While the overall reading has only registered a negative number over the last three months, new orders have been dropping for 7.  Like the manufacturing sector, employers are focusing on their backlog of orders, which has fallen in each month since March.


A month-on-month fall in German industrial output, driven by a weakening manufacturing sector, and a sharp cut in European Commission growth forecasts on Wednesday exacerbated fears that the eurozone’s biggest economy is slipping closer to stagnation.

The seasonally adjusted 1.8 per cent month-on-month fall in industrial production was worse than expected and followed other data published by the German economy ministry on Tuesday that showed factory orders fell 3.3 per cent in September.

Here are the charts from the German Statistics Bureau: 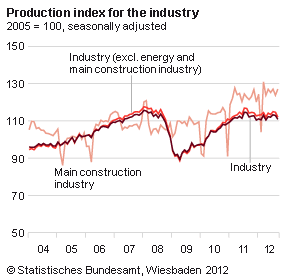 Overall production has been stable for the last year, but we haven't seen a strong advance.  On the good side, there hasn't been a strong decrease, either, which considering the overall EU situation is pretty good. 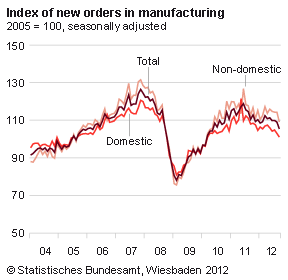 The overall new orders number is also not encouraging.