There has been a lot of ink (both digital and otherwise) spilled over the current situation in China.  However, it's been a bit since I've looked at the overall macro situation.  So, let's simply see where the Chinese economy is in terms of its macro-level statistics.

The top chart shows the overall growth rate for Chinese GDP.  While it has slowed down over the last few years, it has done so from a very high pace  (11.9% at its peak).  But, what's also important to remember is that with a very large and growing population, China needs to maintain a fast rate of growth, simply to continue creating enough overall wealth to increase the benefit received by all Chinese.

The bottom chart shows that the overall total amount of GDP -- despite the slowing -- continues to grow as well.

The above chart shows that total GDP per capita is a little over $2500 US dollars/person.  This data does not take into account income inequality, but it does give us an idea from the amount of wealth created via the government's overall policies

Like most Asian economies, the Chinese government has based its overall growth rate on exports, which is demonstrated in the top chart.  Exports have continually risen over the last four years.  The lower chart shows imports -- some of which are used to create goods for export.

The top chart shows the current account to GDP, which peaked at the height of the global crisis, but has since moved to more reasonable levels.  This chart shows the net exporting is still central to the overall economic model of the Chinese.

There is good and bad news in the inflation chart.  The good news is that it's been moving lower, giving authorities more room to change policy.  However, lower inflation usually translates into lower growth, as evidenced by the above discussed GDP charts.

China is in the process of trying to change from an exclusively export driven economy to one with a higher internal demand component.  This is actually a lot harder than they thought it would be originally.  The good news is they have  plenty of space to work with -- their GDP is still high and inflation is low.  And, the latest statistical releases shows its happening:

CHINA, you may have heard, announced its latest growth figures on Thursday. The speed of growth attracted most of the attention, but the source of growth is perhaps more striking. At a press conference (in Chinese; see an FT report here), the National Bureau of Statistics pointed out that in the first three quarters of this year consumption* contributed over half (55%) of China's growth, exceeding the contribution from investment. If that pattern holds, China's growth this year will not be investment-led (let alone export-led), but consumption-led.**

That hasn't happened for over a decade. Or so I thought. Until recently, the official statistics showed that investment made the biggest contribution to China's growth in every year since 2001. But earlier this week the new edition of the China Statistical Yearbook arrived on my desk with a thud. Its revised figures show that consumption contributed 55.5% of China's growth in 2011; investment contributed only 48.8%. (Net exports subtracted 4.3%.) In other words, China's growth was consumption-led last year as well. 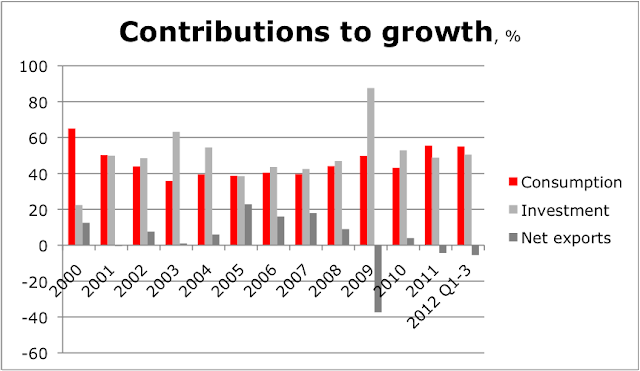