I've been speculating that the surprise increase in gas prices over the late summer would lead to an increase in initial jobless claims, a test if tge energy choke collar in action. Here's the latest data, whowing gas prices in red (right scale) and new jobless claims in blue (left scale): 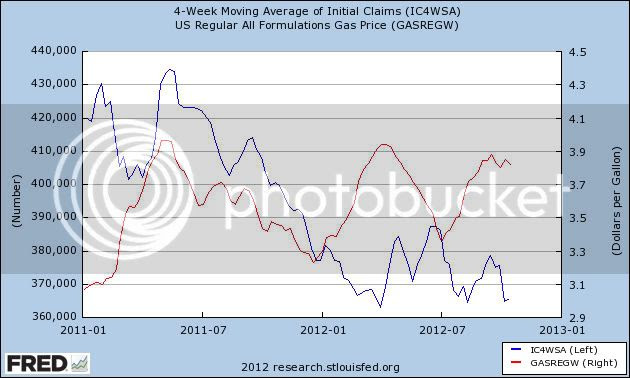 It's hard to tell. It does look like there might be a correlation with about a 3 month lag, but if so it doesn't exactly jump out as being a tight relationship. And it certainly didn't lead the last couple of weeks (note this is the 4 week moving average, so the anolomies due to California don't affect the data very much).

If gas prices decline into winter, it will be interesting to see if we finally get a new low in iniial jobless claims - something we haven't had since the end of March.
Posted by New Deal democrat at 10:30:00 AM