The Difference Between Slack Supply and Slack Demand

From the latest IMF report:

Cyclical indicators point to ample slack in many advanced economies but to capacity constraints in a number of emerging market economies (Figure 1.9).  WEO output gaps in the major advanced economies are large, varying from about 2½ percent of GDP in the euro area and Japan to 4 percent in the United States for 2012 (see Table A8 in the Statistical Appendix). These gaps are consistent with weak demand due to tight financial conditions and fiscal consolidation. By contrast, most emerging market and developing economies that were not hit by the crisis continue to operate above precrisis trends.  However, their potential growth rates in recent years are judged to have been higher than indicated by the 1996–2006 precrisis average, and therefore WEO output gap estimates do not signal much overheating.

I realize that we keep hitting on this point over and over again.  The question is, why?  The answer is simple; lack of supply and lack of demand lead to two different policy prescriptions.

Lack of supply -- in its simplest terms -- means there is insufficient "stuff" at either the individual market level or at the macro level.  Take, as an example, computers.  Suppose the entire market were clamoring for computers but there was only one domestic company making them.  Solving this problem from a policy perspective would involve tax breaks and or credits for the industry (for example advanced depreciation credits or deductions or decreased overall corporate tax rates), backstopping the financial industry to increase loans (creating a federal loan guarantee program) and opening up trade treaties with other countries that also produce computers.

Lack of demand means we have plenty of stuff, but not enough people are buying that stuff.  Returning to the computer example from above, suppose we had plenty of computers, but there was a big inventory overhang.  Let's assume this doesn't mean the industry has matured and is on the way out.  What this means is there is either insufficient income to purchase these computers or insufficient credit to be expanded.  That means that at the macro level we need to create income or increase the credit and or lending facility inherent in the overall system.  Hence, the policy prescriptions between lack of supply and lack of demand are entirely different.

How do we tell the difference between these scenarios?  There are two pretty good indicators -- inflation and employment.  Higher inflation -- especially in a particular market  -- probably means there is insufficient supply.  The reason is simple: supply is constrained and more people are bidding for that restrained resource.  Hence -- prices rise.  A good example of that currently lies in both the agricultural and energy markets.

High unemployment typically means decreased income and hence a lack of demand.  This is simple, macro-level economics.  The primary way to deal with this problem is to increase employment.  Hence, the standard policy proscription of increased macro-level spending on infrastructure.   This increases incomes at the macro level, and thereby increases demand. 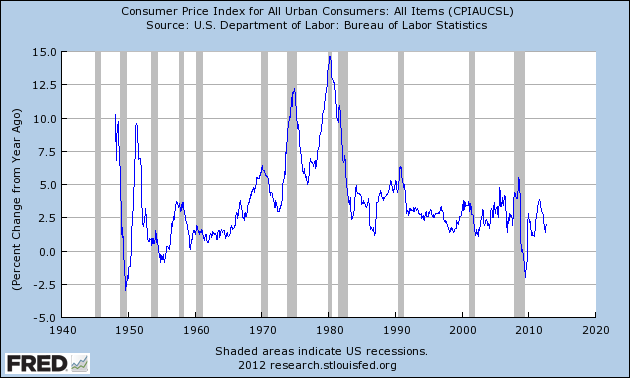 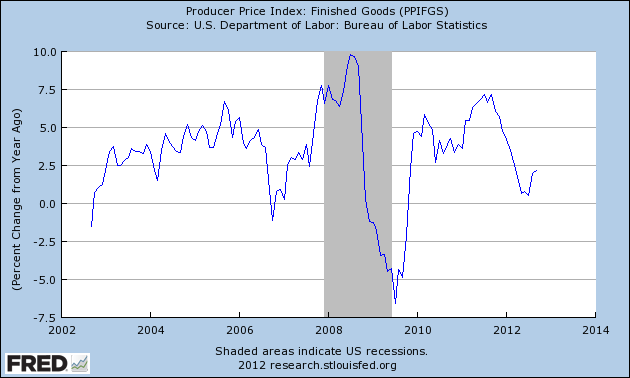 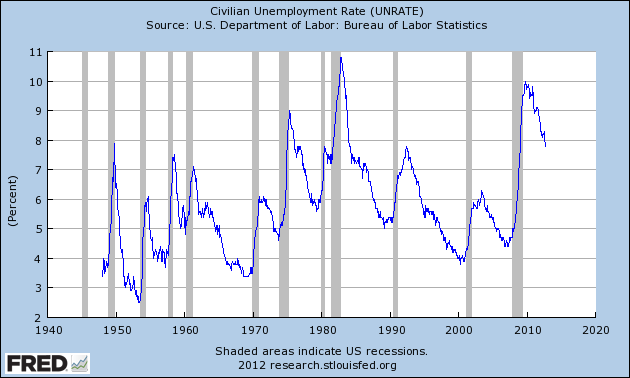 Consumer prices (top chart) and producer prices (middle chart) are tame.  Unemployment (bottom chart) is high. It's lack of demand that is driving the market.