Last week, both NDD and I were very pleased with the latest building permits number.  Let's look in a bit more detail about why that is.

First, housing downturns have preceded a majority of post WWII recessions.  Hence, the reason for the concern before the recession about the impact of the housing bubble both on the downturn and the the subsequent recovery.

In addition, consider the following chart of building permits: 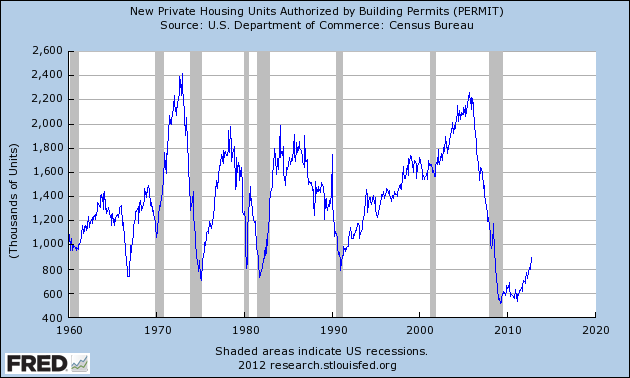 In addition, notice the importance of a rebounding housing sector to subsequent recoveries.  We see increasing building permits occur during the following expansions: early 1970s, mid-1970s, 2980s, 1990s and 2000s  Correlation does not equal causation, but clearly the two events happening at the same time is very important.

When looking at the leading indicators, we see that building permits are a small component thereof:

However, we see the disproportionate impact of the latest readings on the latest LEIs release: 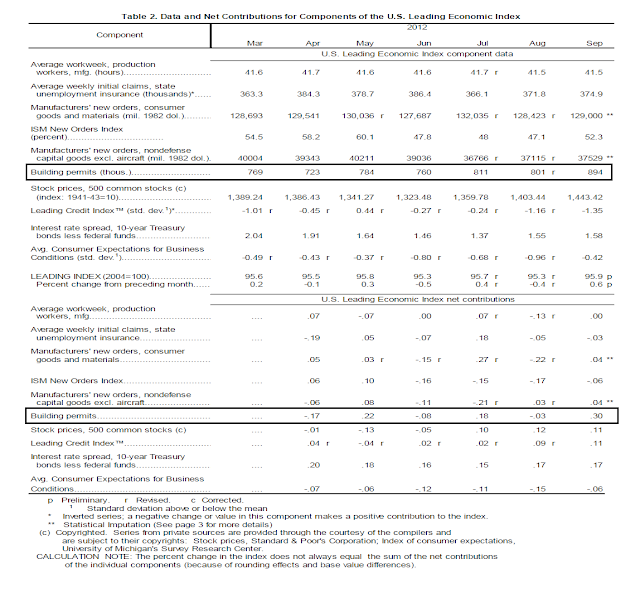 Although they account for a small percentage of the LEIs, last months number accounted for a .30 increase in the index, leading to a strong increase (.6).  Here's the money quote from the Conference Board's release:

The Conference Board LEI for the U.S. increased in September after declining in the previous month. Large positive contributions from building permits and the financial components offset the negative contributions from ISM® new orders index, consumer expectations for business conditions and weekly initial claims for unemployment insurance (inverted). In the six-month period ending September 2012, the leading economic index increased 0.3 percent (about a 0.6 percent annual rate), much slower than the growth of 2.6 percent (about a 5.2 percent annual rate) during the previous six months. In addition, the strengths and weaknesses among the leading indicators have become balanced in recent months.
Posted by Unknown at 10:00:00 AM