OUCH! Did durable goods just jump off the fiscal cliff?

There's no getting arouind the ugly durable goods numbers this morning, shown below in blue, and "core" capital goods ex-military and transportation (mainly Boeing plane orders) in red: 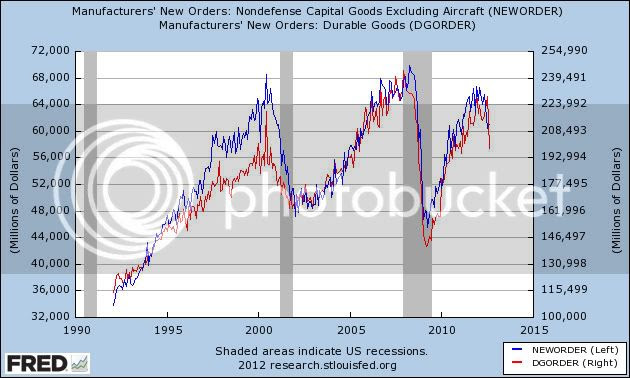 It looks nearly certain at this point that manufacturing is in a recession.

But note the difference between 2000-01 and 2007-08. The "great recession" was a consumer-led recession, brought about by as energy spike together with a collapse in housing construction, and too much consumer debt. Durable goods did not meaningfully decline until well into that recession. By contrast, in the business investment led recession (internet bubble, anyone?) of 2001, durable goods spending declined well before a recession started.

The four week average of unemployment claims as of this morning is only about 3% above its March low, an unlikely event if a recession had already begun. Meanwhile the stock market just made new highs within the last couple of weeks, also not typical after a recession has already begun (more on that in another post).

So I am not convinced that, even if we have entered a manufacturing recession, it has bled over into the general economy enough to be consistent with a consumer recession as well. As I noted a few days ago, sadly it appears that the terrorist attacks of 9/11 were what pushed the economy in 2001 into enough of a tailspin to qualify as a recession. In the present case, one potential culprit is the "fiscal cliff," which must be factored into business decisions as to ordering and building early next year. Do we really have confidence that this Congress and this President will not repeat the debt ceiling debacle of July and August 2011? If we don't, should businesses?
Posted by New Deal democrat at 12:00:00 PM