A look at employment since the recession, measured 2 ways

A few months ago, Karl Smith of Modeled Behavior showed that there has been a stark bifurcation in the recovery of private sector service employment vs. the complete non-recovery of goods producing and government employment. Even with the generally poor employment reports of the last half a year, that stark difference remains.

First, here is the update of the comparison as of the most recent payrolls report. Blue is private sector service employment, red is manufacturing, construction, and government: 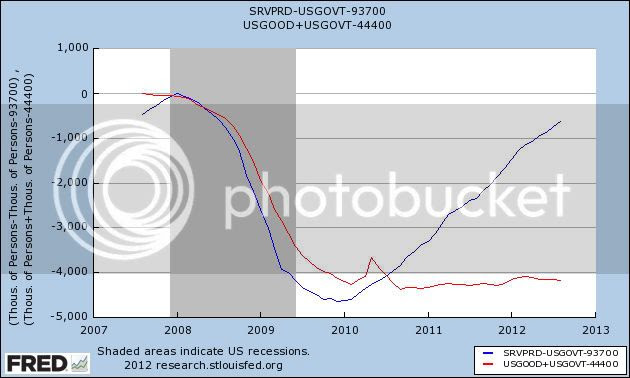 Private sector service employment has almost completely recovered since the recession. While there is no certainty that the trend will continue, if it does the recovery will be complete by early next year. Meanwhile, there has been no recovery at all in goods producing jobs and public sector jobs.
UPDATE: The above graph does not take into account the preliminary benchmark provisions announced by the BLS this morning. Once we take those into account, instead of still being down -770,000 jobs, the private services sector is down only -378,000 jobs, so the entire decline could be reversed by the end of this year.

Unfortunately, even the good news about service sector private jobs doesn't look nearly so good when we adjust for population: 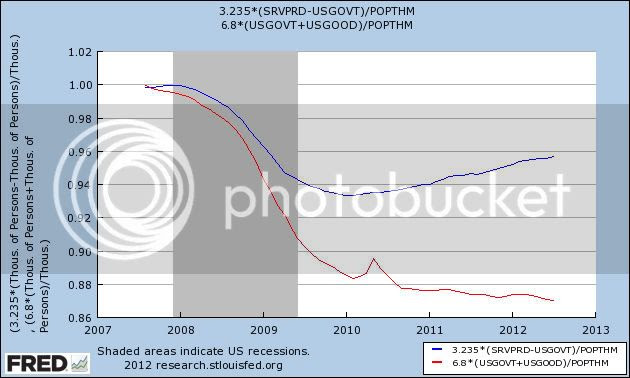 Adjusted for population, there has only been a modest improvement in private sector service jobs, and the hemorrhaging in goods producing and public sector employment has continued relentlessly.
Posted by New Deal democrat at 9:00:00 AM