While manufacturing was a big reason for the US' recent economic growth, that trend is definitely changing.  Recent data shows that manufacturing is slowing.  Let's start with the latest ISM data. 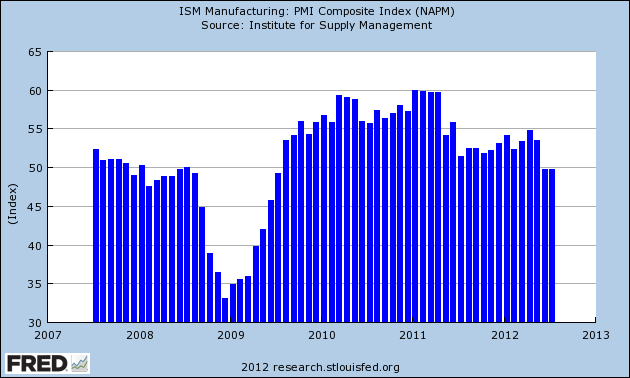 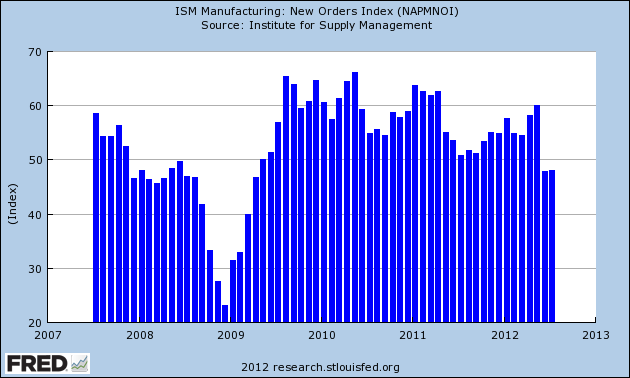 Consider the following anecdotal points from the latest ISM report:

I've emboldened the comments that talk about weakening business -- of which there are five points.

From the latest Beige Book:

The August Empire State Manufacturing Survey indicates that conditions for New York manufacturers deteriorated over the month. The general business conditions index slipped below zero for the first time since October 2011, falling thirteen points to -5.9. At -5.5, the new orders index was below zero for a second consecutive month, and the shipments index fell six points to 4.1. The prices paid index climbed nine points to 16.5, pointing to a pickup in the pace of increase in input prices, while the prices received index hovered just above zero for a third consecutive month. The index for number of employees inched lower, but remained positive at 16.5, suggesting a moderate increase in employment levels, and the average workweek index rose to 3.5. Indexes for the six-month outlook were generally positive but lower than in July, indicating that respondents expected business conditions to improve little in the months ahead.

We see a similar set of facts in the Philadelphia survey:


The survey’s broadest measure of manufacturing conditions, the diffusion index of current activity, increased 6 points, to a reading of -7.1. This marks the fourth consecutive negative reading for the index but also its highest reading since May (see Chart). Nearly 30 percent of firms reported declines in activity this month, exceeding the 22 percent that reported increases. Indexes for new orders and shipments remained negative. The new orders index improved one point, while the shipments index fell 3 points.

Richmond is experiencing a similar slowdown:

In August, the seasonally adjusted composite index of manufacturing activity — our broadest measure of manufacturing — gained eight points to −9 from July's reading of −17. Among the index's components, shipments increased twenty-four points to 1, new orders picked up five points to end at −20, and the jobs index moved down six points to −5.

Most other indicators also suggested some easing in the pace of recent weakness. The index for capacity utilization picked up seven points to −9, and the backlogs of orders edged up two points to −25. Additionally, the delivery times index added one point to −4, while our gauges for inventories were mixed in August. The raw materials inventory index was virtually unchanged at 24, while the finished goods inventory index fell three points to end at 18.
Posted by Unknown at 10:00:00 AM