Is Housing the Stealth Story of 2012?

Ever since I've been blogging, housing has been a troubled market.  I started blogging in mid-2004, and started in earnest in 2005.  Sometime after that, I realized that housing was in a bubble -- not because of prices but because of the enormous amount of mortgage debt that was flooding the US economy. Then we had the bubble followed by the crash.  So, for the last 6-7 years, housing has been a disaster.

However, there are more and more signs that it is changing.  I originally put this idea together in the post, Will Housing Save Us? where I argued that housing had spent the last three years correcting from the bubble and, as such, it was time to revert to the norm.  NDD also posted a great series of articles in response to Barry Ritholtz's bearish housing analysis here, here, here and here.


There are broad-based shortages of inventory in the lower price ranges in much of the country except the Northeast, and in the West supply is extremely tight in all price ranges except for the upper end. "Realtors® in Western states have been calling for an expedited process to get additional foreclosed properties onto the market because they have more buyers than available property," Yun added. Widespread inventory shortages also are found in much of Florida.

Let's take this information with a grain of salt, largely because NAR economists aren't known for presenting information in a non-biased manner.  The above information is consistent with the following pieces of information. 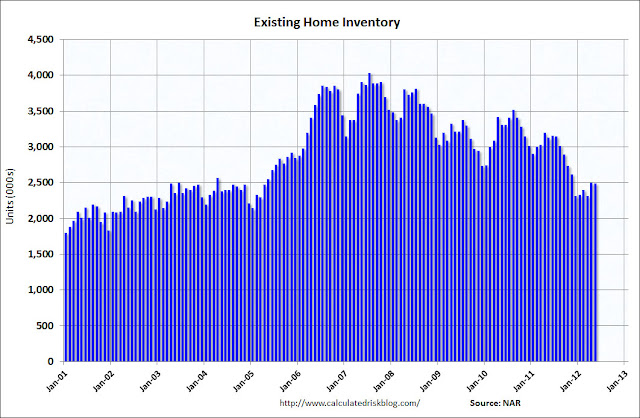 As this chart from Calculated Risk shows, total inventory is now at the upper levels of the pre-bubble levels.  In addition, we're starting to see that real estate markets from across the country are starting to heat up.  As the blog Carpe Diem has noted, Double-Digit Gains in Sales and/or Prices Have Now Been Reported in 33 Metro or State Markets in June.  Granted, these advances are from low levels.  But, they are advances across a broad swath of cities.  He added an additional seven more news stories to the previous total in this post.  Also note this story: Builder Confidence Reaches 5-Year High in June; Framing Lumber Prices Are Back to 2006 Levels.


"For the fourth month in a row, the RE/MAX National Housing Report is showing an increasing Median Home Price. In May, home prices were 6.1% higher than those in May 2011. Home sales also rose above the mark set last year by a significant 12. 8%. With 42 surveyed metros showing increases in BOTH sales and prices, the recovery of 2012 appears to be taking hold in all regions of the country. For 11 months in a row, home sales have exceeded the level of the same month a year ago. Inventory continues to fall significantly lower than the previous year, with a 26.6% drop from May 2011. The related Months Supply and Days on Market figures are also trending lower."

And then we have this post from the Washington Post's Wok Blog:

The housing market was the first domino to fall in the financial crisis, and it’s been one of the last to recover. But there are a few signs that things may finally be starting to look up, as home sales and housing prices have been creeping upward.

First, there’s been a consistent rise in the price of distressed homes since the end of 2011. “That’s something we haven’t seen before,” economist Jared Bernstein points out. “If it sticks, it obviously provides support to overall home prices.”

Housing sales have also been recovering, albeit less steadily, as JPMorgan’s Michael Feroli points out in a research note this week. “The gain in pending home sales occurred in all four regions of the country, and the region with the biggest increase — the West, up 14.5% — was the region that had the biggest tumble back in April,” he wrote.

It's odd using the term "housing" and "recovery" in the same sentence.  I think the extended bearish nature of the market is what is leading some observers to doubt the possibility of a recovery this time around.  And, as in all things, skepticism can help to clarify arguments.  However, there are more and more signs that housing could be the stealth story of the year.