The June ISM manufacturing report yesterday was a stinker, there's no sugar-coating it.  The contraction in the New Orders sub-index will cause a significant downdraft in the Conference Board's June Index of Leading Indicators.

But does a contracting ISM report mean recession now, or later in the year?  The answer to the first question is almost certainly not, and as to the second, the answer is more likely not, although the odds based on past data approach 50/50.

Since the record started in 1948, the report has declined from over to under 50 a total of 32 times.  Of those times, 11 were associated with the onset of recession and 3 more occurred during a recession after a brief period above 50.  That means the ISM manufacturing index has slipped under 50 a total of 18 times when no recession followed, meaning that a one month contraction in the index was associated with no recession a little more than 50% of the time.

Here is the graph of the ISM index, subtracting 50 so that a positive number means expansion and a negative number, contraction, first from 1948 through 1977: 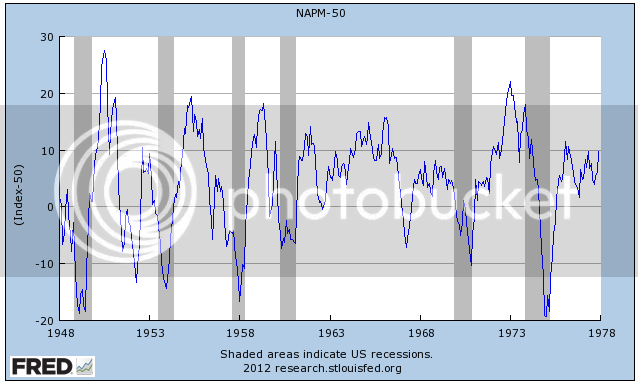 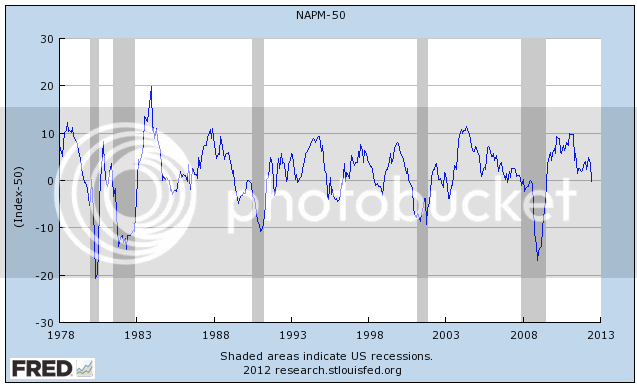 Further, even in those cases where the ISM manufacturing index was associated with the onset of recession, the median lead time was 5 months.  The mean lead time was 4 months.  Only 4 times was the turn coincident with or after the onset of recession.  In other words, while the negative number is of considerable concern as to later in the year, almost certainly it does not mean that a recession already began by the end of the first half of the year.

P.S.: Today vehicle sales for June will be reported. Don't be fooled by YoY comparisons. Total sales, seasonally adjusted, are expected to come in under 14 million. If that's the case, it's bad news since from January through April, the SAAR was over 14 million. If it's under last month's 13.7 rate, meaning it is the worst number of this year, it should be seen as being as bad as yesterday's ISM report.

UPDATE:  New vehicle sales for June were reported at a 14.08 million rate.  That's still below the first four months of this year, but comfortably above May.  Not great, but not bad.
Posted by New Deal democrat at 2:00:00 PM