Will Housing Save Us?

Several weeks ago, NDD and Barry Ritholtz of the Big Picture had a friendly debate about whether or not the housing market has bottomed.  NDD noted that housing is actually affordable by most measures, pent-up demand for housing exists,  and that the shadow inventory story hasn't materialized (there are links to Barry's pieces in NDDs pieces; I recommend you read them as well).

First, put me in the camp that we're at minimum very close to a bottom in housing.  This is based on the following:

1.) New home inventory is near multi-decade lows.
2.) New home sales have been at the same (albeit very low) level for several years.
3.) Existing home sales have stabilized
4.) Existing home inventories are now at far more realistic levels (excess inventory has been worked off).
5.) While real house prices are still dropping, we're far closer to a historical bottom than the top.  In addition, nominal prices are fairly stable (same link).

Ultimately, for me it comes down to inventory; new home inventories are incredibly low, existing home inventory is far more realistic and the "shadow inventory" story -- which has been hanging our or heads for the last three years -- has never materialized.  Diminishing or steady supply = stable cost and, ultimately a more stable market.

All that being said, I want to propose a fairly radical hypothesis: new home sales and construction might wind up saving us.  Let me explain why.

First, consider this graph of the months of available supply of new homes from Calculated Risk: 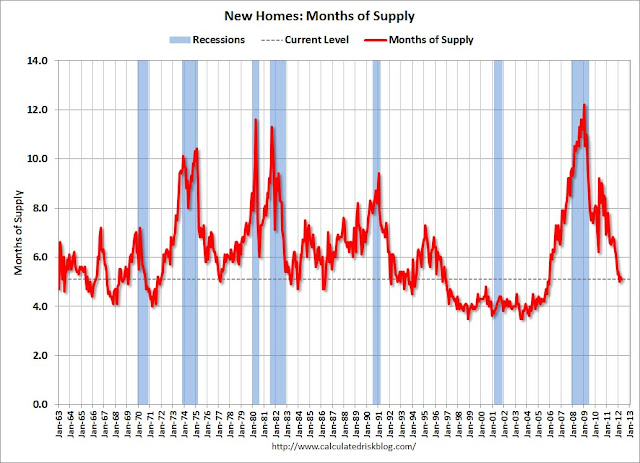 We're at multi-decade lows.  Put another way, most of the time we see more inventory in the market place, rather than less.  That means we're short inventory; a sudden increase in demand would lead to the market being caught flat-footed. 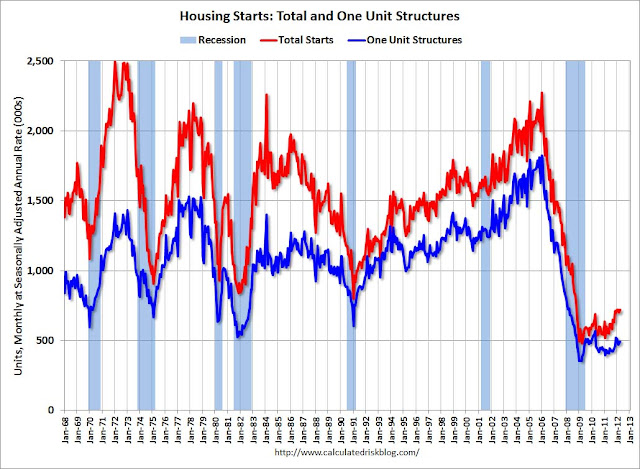 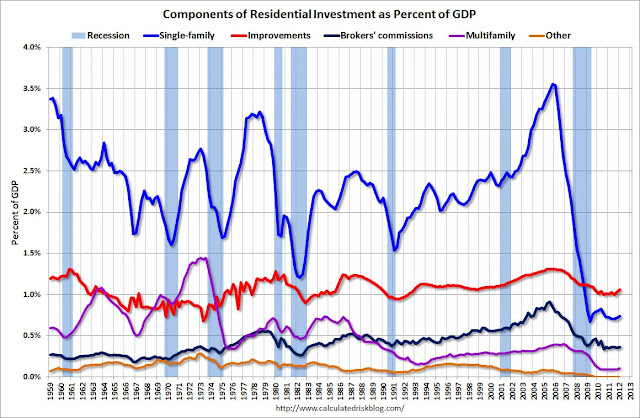 The top chart shows that single family starts are still very low by historical standards -- that the building permit increase is largely the result of non-family units.  However, the bottom graph shows that from a percent of GDP perspective, the single family market is actually at very low levels as a percent of GDP -- in fact, it's very much out of synch with its historical trend.  Put another way, we've got nowhere to go but up. 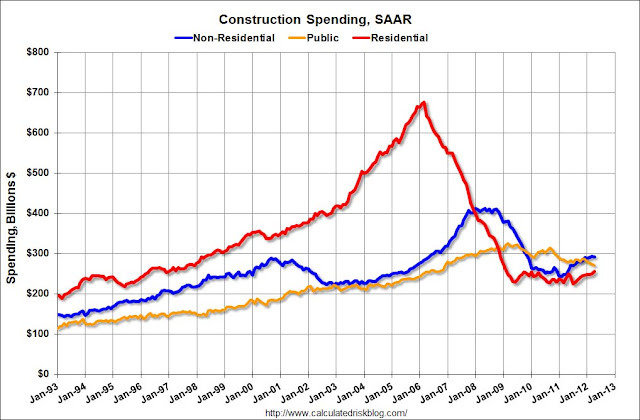 The previous observation is highlighted more accurately in this graph, which shows construction spending is at very low historical levels. 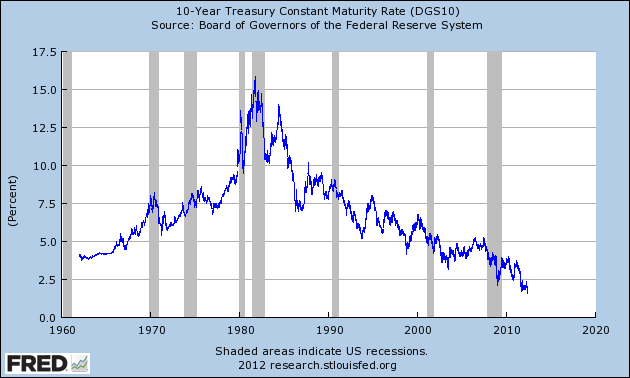 The 10-year treasury yield has been declining since 1980 -- a 30 year trend.  On Friday, it closed at 1.45%.  Simply put, it can't get much lower.  And with the world's population becoming more middle class, we'll see continued constraint in resource usage -- meaning more inflationary pressures, meaning interest rates have nowhere to go but up.

Perhaps most importantly, I'm not the only person thinking this way; home builders have become more confident over the lats 6 months: 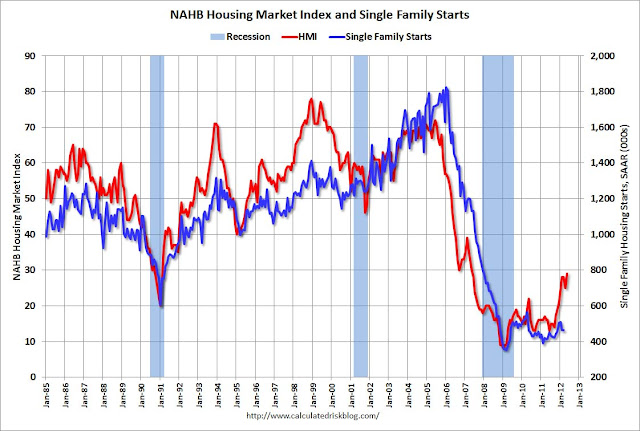 To sum up, we over-invested in housing in the 2000-2010 time period.  Now the pendulum has swung the other way to a period of under-investment, largely to work off the massive inventory overhang.  But, we're getting close to the end of the cycle, which means a bump in demand could lead to the market being caught off-guard.  In addition, there is the interest rate story; the cost of borrowing to buy a home isn't going to get much cheaper.

The main element missing here is the stimulus that gets things moving; and the answer to that is jobs.