How Low Will Oil Fall? 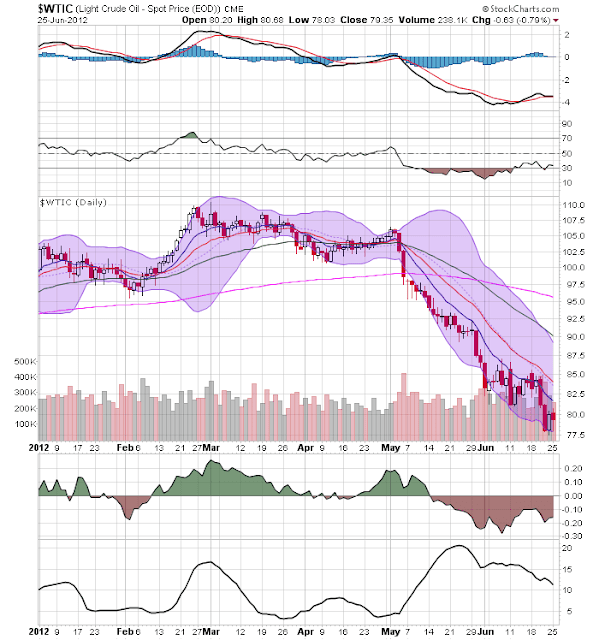 The daily chart is very bearish.  Let's start with the price section and move outward.

1.) Prices have been dropping for two months.  We see a gradual, continual sell-off in May, followed by a price consolidation in June.  Prices traded between 82.5 and 85 for the first few weeks of the month, but have moved a touch lower since.  Prices are using the EMAs as technical resistance.

2.) The MACD declined in May and moved sideways in June.  Although ti gave a buy signal earlier this month, the MACD is still in negative territory and the angle of the rise is not encouraging.

3.) Overall, prices are still very weak versus the short-term trend.

4.) For the last 6 weeks, money has been flowing out of the market.  Also note the fairly negative readings at the beginning of the month; traders were selling at the fastest clip in the last 6 months.

5.) The good news is the volatility is decreasing, indicating the sell-off might be nearing the end. 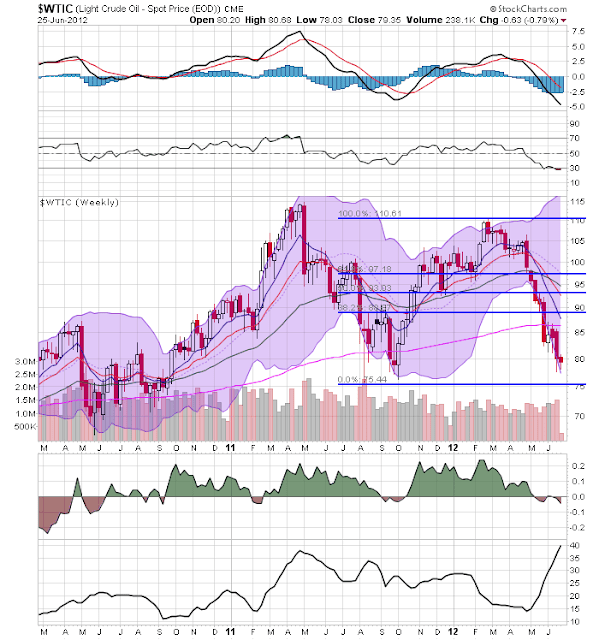 Above is a weekly oil chart.  Let's take a look at the technicals, starting with the price section.

1.) Prices have been dropping since the first week of May -- a nearly two month stretch.  We see prices traded sideways for two weeks after falling below the 200 day EMA, but they could not get any momentum going. They fell further last week.  Right now, we see technical support at the 75 price level.

2.) Prices are below the 200 week EMA.  Also note the shorter EMAs are moving lower.  These two developments are bearish.

3.) The MACD is negative and declining.

4.) The RSI is very low -- it's right around 30.  While some traders use this as a signal for a reversal, I don't.  Instead, I simply use the RSI as a gauge of where prices are relative to recent price action.  This reading tells us that prices are weaker today than the 14 day average.

4.) The CMF is right around 0.  While we've seen some negative readings, they haven't been that severe.

Overall, these two charts are bearish.  Any rally would be seen as a technical trade rather than a big move higher.  I'd be looking at 75 as a price target based on the above.
Posted by Unknown at 2:00:00 PM