For April (really an average of February, March, and April), the seasonally adjusted 20 city index rose for the third month in a row.  As the below graph shows, outside of the time period when the $8000 housing credit was in effect, this is the first time we have had house price increases for three months in a row since the peak of the  market in 2006. (Note: graph does not include this morning's increase): 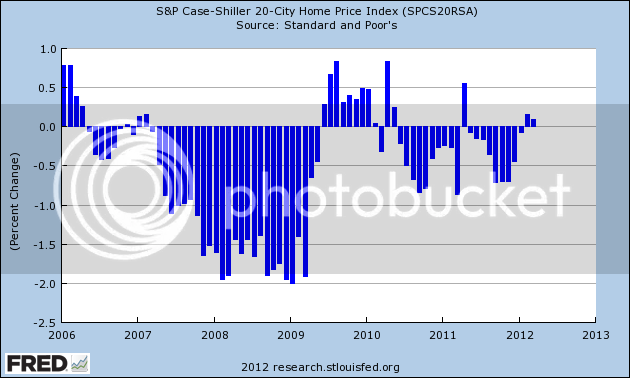 Beyond the aggregate number, the diffusion of the gains was also impressive.  Sixteen of 20 metropolitan areas in the index showed seasonally adjusted month over month gains - meaning the gains were not simply a factor of house prices typically going up in the spring, and were widespread.

A year ago, I said that I expected Housing Tracker's index of asking prices to turn positive YoY by early this year.  It did, at the end of November of last year.  I also said I expected it to lead the Case Shiller index.  It did that too.  The only caveat I have now, as I had a year ago, is that the turn has been in nominal prices, rather than real, inflation-adjusted prices, which may still be a long way off.  At this point the only argument the housing bears have left is waiting for the long-fabled foreclosure tsunami to finally wash ashore.