What's Up With Australia?


The Conference Board LEI for Australia fell sharply in April led by a large decline in building approvals (April’s significant drop in the housing indicator was mainly due to a temporary interruption in approval processing), and there were downward revisions to the past few months as actual data for sales to inventories ratio* and gross operating surplus* for the first quarter of 2012 became available. With this month’s decline, the six-month change in the leading economic index remained negative at 2.8 percent (about a -5.5 percent annual rate) between October 2011 and April 2012, significantly down from the increase of 1.0 percent (about a 1.9 percent annual rate) during the previous six months. In addition, the weaknesses among the leading indicators have been somewhat more widespread than the strengths in recent months

Consider this chart from the same report: 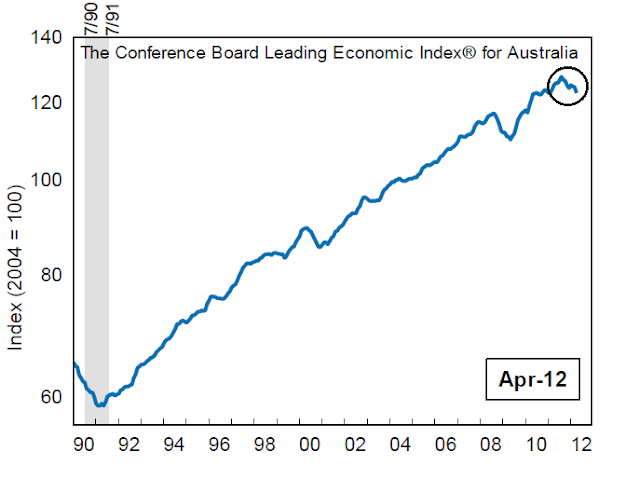 Let's go to the latest policy announcement from the RBA to get an overview of their economy:


Members noted that indicators of recent economic activity had been mixed but, on balance, suggested continued moderate growth. Taking the past two months together, ABS data suggested a pick-up in the growth rate of retail sales; nominal retail sales declined by 0.2 per cent in April, but this had followed a strong rise of 1.1 per cent in March. Consumer confidence rose slightly in May, but remained below its long-run average level. In aggregate, housing prices continued to decline and activity in the housing market remained weak, with a sharp fall in dwelling approvals in April partly accentuated by the introduction of new legislative guidelines in Western Australia


Overall, this report looked very much like the US consumer economy; weaker confidence plus some (but not) great growth in overall retail sales.


Surveys of business conditions generally fell in April, to average or below-average levels. Much of the reported strength in business conditions continued to be in mining-related and transport industries, with the weakness concentrated in the retail, construction and manufacturing industries. Members were briefed on the March quarter capital expenditure survey, which suggested a continuation of the very large pipeline of committed mining investment in coming years, notwithstanding recent announcements by some mining companies that they were re-considering the viability of a number of resource projects to which they had not yet committed. The data also showed that non-mining investment intentions remained weak. The pace of business credit had been increasing gradually to an annualised rate of around 4 per cent over the six months to April.

Australia's economy has two sectors: mining/natural resources and everybody else.  With China right around the corner, Australian natural resource companies have a natural market for their goods.  However, note that China is now becoming a less-then competitive manufacturer because of rising wages.  This is part of the overall reason for their latest slowdown, which in turn is having an impact on the suppliers of China's raw materials.  This explains why miners are going to continue with current expansion plans, but are rethinking expansion that is only theoretical right now.

The drop is concerning.  I'm guess that most of it is related to the China slowdown.


Some modest strengthening in the labour market over the year to date was apparent, as employment increased by 15,000 in April, the unemployment rate declined to below 5 per cent and the trend measure of average hours worked edged up. However, other indicators and information from liaison continued to suggest that hiring intentions outside mining-related activities remained relatively subdued.

The above chart shows Australia's overall unemployment rate, which is solid by comparison to literally everybody else.  However, note again that the Australian economy is a bit of a "one trick pony;" mining/natural resources are booming and everybody else is limping.


Recent data indicated that private wage growth had been relatively steady in the past few quarters. The wage price index for the private sector increased by 0.9 per cent in the March quarter, to be 3.7 per cent higher over the year; growth of public-sector wages slowed a little in the quarter and was running at 3.1 per cent in year-ended terms. In line with differences in labour market conditions across the country, the pace of private-sector wage growth had picked up across a broad range of industries in Western Australia, although, relative to other states, the difference in the rate of growth of wages was less marked than it had been in 2007–2008. Fair Work Australia's annual wage review announced a 2.9 per cent increase in the minimum wage and award wages.


The above wage gains are impressive, and are probably largely caused by the economy being near full employment.  The only way for a company to attract workers in the current environment is through increasing wages.

Overall, things are OK, but not great.  Most importantly, the one-sided nature of their economy is a big problem right now, as a consensus is emerging that China is now looking to shift their economy from one driven by manufacturing and trade to one driven by internal demand.

The good thing about Australia is their Central Bank Board, which recently lowered rates in response to the declining situation.  As noted by the Money Illuision Blog:


Forget about the implied 5.5% NGDP growth forecast.  Australia has a 2-3% inflation target and faster trend RGDP growth than the US.  That sort of nominal growth would be beyond my wildest dreams for the US.  Rather think about how proactive they are.  Unemployment is low and inflation is in the sweet spot.  But they are easing monetary policy because they see the global slowdown, which for some reason the much more sophisticated Fed and ECB don’t quite comprehend.  They aren’t cutting rates because 5.5% NGDP growth is too low, they are cutting rates to make sure that 5.5% NGDP growth happens.

The Fed seems content to wait until our recovery is off the rails, and then pull out still another QE, each one less stimulative than the last, because they mostly work via signalling.  Every time the Fed fails to carry through it losses a little more credibility.  And the biggest irony is that the credibility loss they are worried about is too much inflation!  That’d be like Mitt Romney worrying that people will regard him as too spontaneous and reckless.