Over the last few weeks, the economic news from the both the UK and the EU has been decidedly negative.  Consider the following:


The seasonally adjusted Markit/CIPS UK Manufacturing Purchasing Managers’ Index® (PMI®) dipped to 50.5 in April, below March’s revised reading of 51.9, but still above the neutral 50.0 mark that separates expansion from contraction. The PMI has signalled growth in each of the past five months.

Manufacturing output expanded for the fifth month running in April. However, the rate of increase eased to its weakest in the year-to-date, partly due to a sharp reduction in new export orders. The latest decline in production was largely centred on the consumer goods sector. In contrast, output rose at producers of intermediate and investment goods.

Where an increase in output was reported, this partly reflected work on existing contracts. Backlogs of work fell for the fifteenth month in a row and at a faster-than-series-average pace.

Here are the two relevant charts: 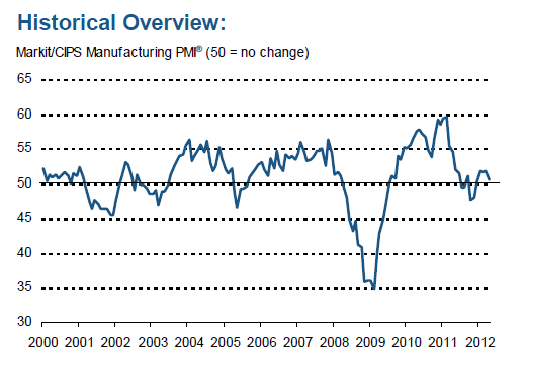 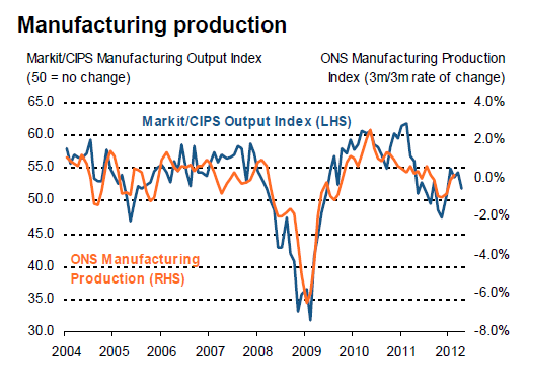 The top chart shows the overall index.  While it is still positive, it's barely so.  The bottom chart shows overall production , which, while positive, is also declining and has been for about a year.

More importantly, the recent decline is due to a decrease in export orders.  This tells us that the overall global slowdown is hitting exports.


At 46.2 in April, down from 48.4 in March, the final seasonally adjusted Markit/BME Germany Purchasing Managers’ Index® (PMI®) posted below the neutral 50.0 threshold for the second month running. April’s index reading was much lower than the long-run series average (52.2) and pointed to the sharpest deterioration of overall business conditions since July 2009. The drop in the PMI since the previous month largely reflected a renewed contraction of output levels, alongside negative contributions from the new orders and employment components. April data highlighted particular weakness in the investment goods sector, with firms in this market group seeing a rapid drop in their workloads.

Overall production levels in the German manufacturing sector fell at a solid pace in April. This was the first decline in the year to date, and the sharpest rate of contraction since mid-2009. Anecdotal evidence widely attributed the reduction in production volumes to an ongoing deterioration in new order books.

April data signaled a decrease in new business intakes for the tenth consecutive month, with the pace of reduction the steepest since December 2011. Lower workloads in part reflected a sharp decline in new export levels during April, especially in the investment goods sector. A number of manufacturers cited weaker demand from clients in Southern Europe as the main reason for falling export orders at their plants

Production fell at a "solid pace," caused by the reduction of new orders.  Also note the reductions are called "sharp" and are compared to slowdowns from other slower periods of growth -- not a good sign.


The Eurozone manufacturing downturn took a further turn for the worse in April. The seasonally adjusted Markit Eurozone Manufacturing PMI® fell to a near three-year low of 45.9, down from 47.7 in March and below the earlier flash estimate of 46.0. The headline PMI has signalled contraction in each of the past nine months.

The April PMIs also indicated that manufacturing weakness was no longer confined to the region’s geographic periphery. The German PMI fell to a 33-month low, conditions deteriorated sharply again in France and the Netherlands also contracted at a faster rate.

There was no respite for the non-core nations either, with steep and accelerating downturns seen in Italy, Spain and Greece. Only the PMIs for Austria and Ireland held above the 50.0 no-change mark. 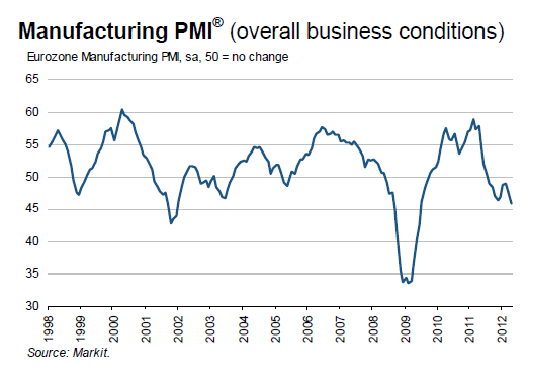 The index has been below 50 for the last few months.  According to the report, the weakness is no longer occurring only on the periphery, but is spreading to the interior. 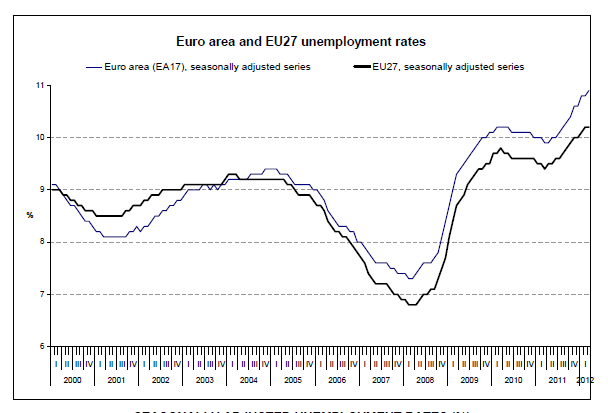 And all of this is before we consider the medium term implications of the political situation in Spain and Greece.

And consider this release of industrial production: 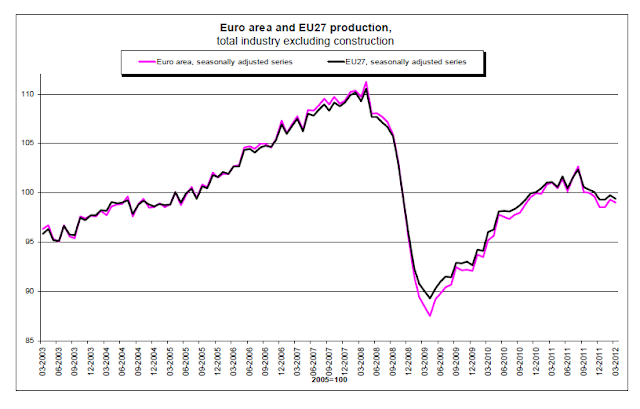