More Signs of the Global Slowdwon

Last week, the Bank of Korea decided to leave rates unchanged.  Here is the relevant section from their policy statement:


Based on currently available information, the Committee considers some economic indicators in the US to have sustained their trends of improvement, but economic activities in the euro area to have remained sluggish. Growth in emerging market economies has continued to exhibit signs of weakening, due mostly to slowing exports. Going forward the Committee expects the global economy to sustain its recovery, albeit at a moderate pace, and judges that risk factors still exist―including the resurgence of sovereign debt problems in Europe stemming from the heightening of political uncertainty, the deepening economic slowdown there, and the geopolitical risks in the Middle East.

Another report from the bank added this:


The financial and economic conditions at home and abroad that formed the backdrop to these monetary policies are set out in what follows. In the world economy, first of all, the trend of recovery has shown signs of faltering as the negative impacts on the real economy of the continued deterioration of sovereign debt problems in Europe during the latter half of 2011 have spread to emerging market countries

Consider the following chart in combination with the preceding statements: 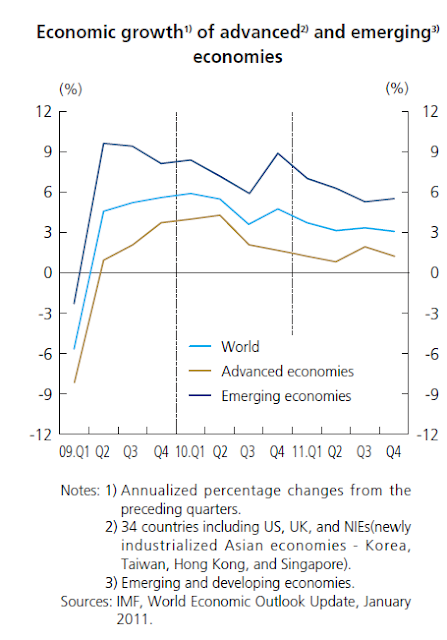 The key here is the slowing of EDEs, largely as a result of slowing exports.  Remember, emerging economies have two primary products: labor and raw materials.  But in order for those goods/services to have value, there must be demand from the emerging world.  If that is slowing, we see a ripple effect more though the world economy.


Consumer price inflation fell to 2.5% in April, and core inflation dropped compared to the previous month as well. The Committee does however recognize the presence of potentially destabilizing factors, such as the ongoing high inflation expectations and the geopolitical risks in the Middle East. In the housing market, the decline in sales prices gathered pace somewhat and the rise in leasehold deposits slowed in Seoul and its surrounding areas, while in the rest of the country both sales and leasehold deposit prices sustained high rates of increase similar to those in the previous month.

And from a second report:


The upward trend of global inflation flattened out, thanks to the stabilization of international commodity prices and the easing of demand side pressures in line with the world economic slowdown. High inflation expectations and a renewed rise ofinternational oil prices, due to geopolitical risk in the Middle East, nevertheless have remained as potentially destabilizing factors to prices 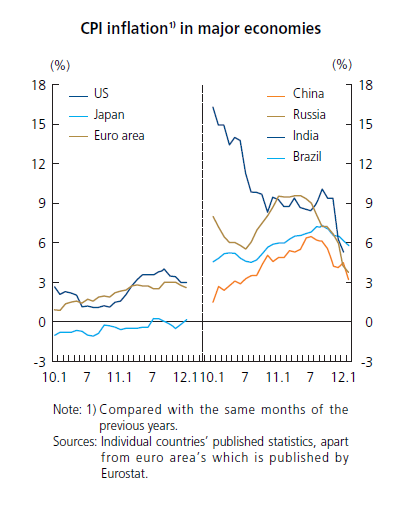 The chart above shows that global prices are decelerating, largely as a result of dropping demand.
Posted by Unknown at 10:00:00 AM